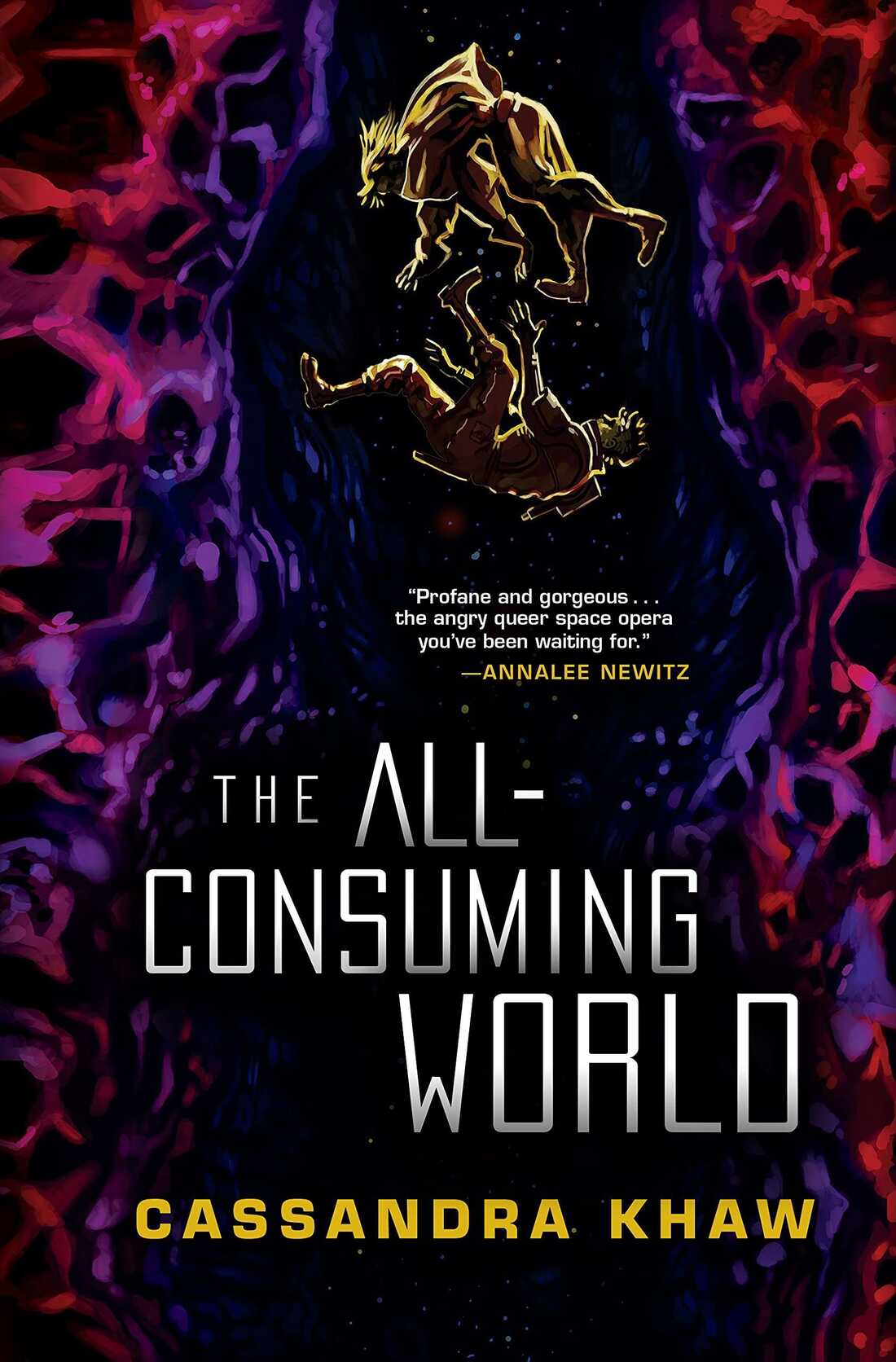 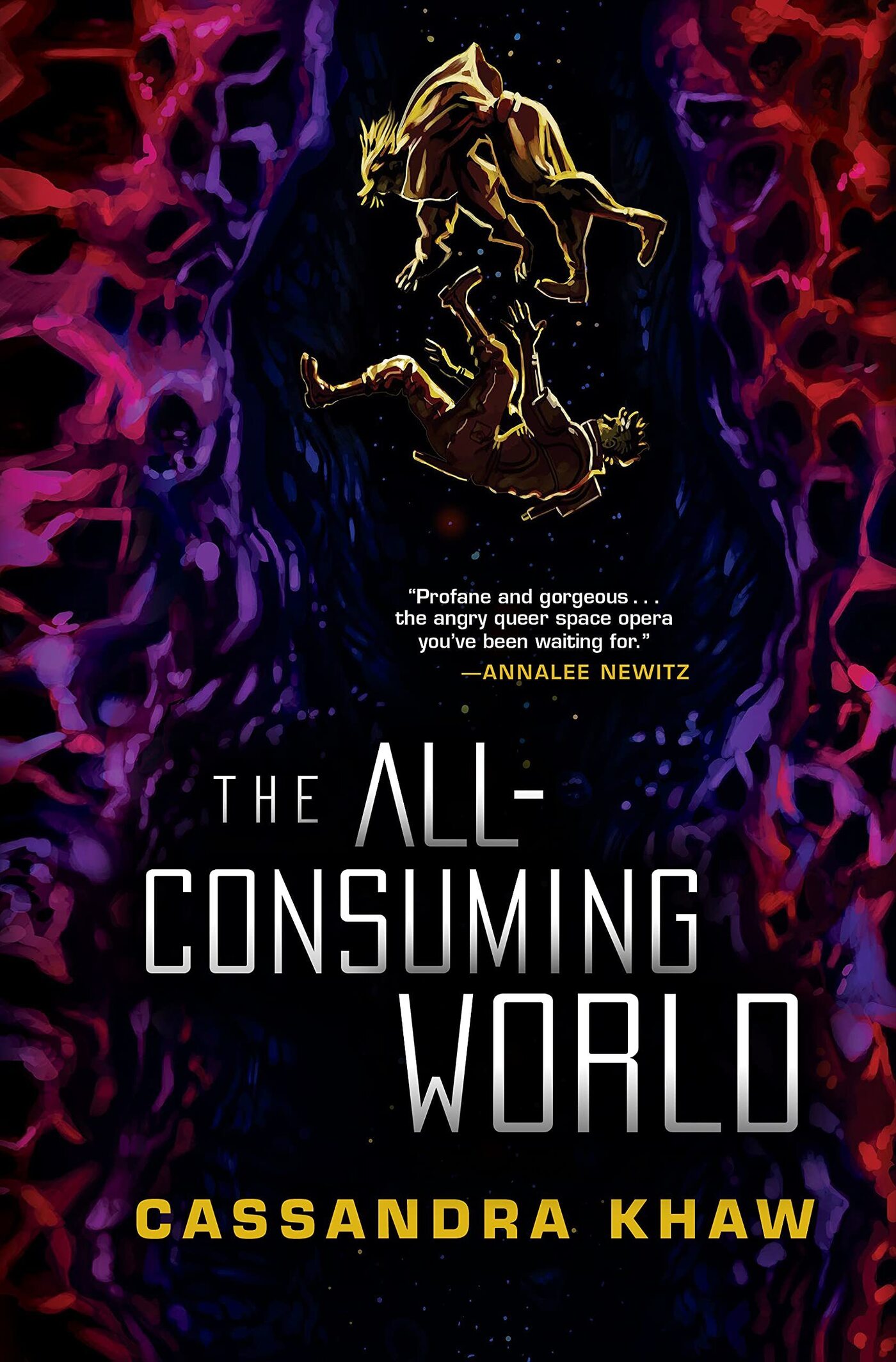 A rag-tag band of criminals must come together for one last heist; of course, they didn’t part on good terms after the last job …

You might know this story, but you don’t yet know it in the hands of Cassandra Khaw. They transform one last heist into The All-Consuming World: a visionary, foul-mouthed, gory sci-fi adventure, dripping viscera, violence, and beauty in equal measure.

This time the criminals are cyborg clones — grown and augmented for work, treated like second class citizens and, unless something goes wrong, functionally immortal. When their bodies wear out or are damaged, their minds are uploaded into a new body, as long as nothing goes wrong. “Work, die, mulch the corpses, brine in the appropriate solution, bring them back. Rinse repeat.” Maya is the muscle and often our viewpoint character, loyal number two to callous mad scientist Rita, the manipulative former leader who’s bringing the Dirty Dozen — or what’s left of them — back together.

The authorities determined to stop them are autonomous AIs called Minds: relentless, alien, fascinating. A powerful Mind faction, the Bethel, believe the physical world and data exist to be devoured. We also meet the enigmatic Merchant Mind — out for themself, playing multiple sides to a mysterious end — and Pimento, a surveyor Mind who becomes embroiled in politicking. There’s a third wrinkle: Elise, one of two casualties from the last heist, isn’t exactly dead. Of course, she’s not exactly alive either – and that’s one of the hooks Rita uses to reel the old team back, along with the chance to figure out what exactly went so wrong last time.

For most of The All-Consuming World, the reader doesn’t know why the heist has to happen now, or what its target is. True stakes reveal themselves slowly. Anyone who seems to have answers turns out to be an untrustworthy manipulator keeping everyone else in the dark, so you’re pretty much in the dark, too. Khaw’s characters are damaged, raw, full of salt and vinegar, not always likable but charismatic. Members of the Dirty Dozen have baggage, and Khaw effectively gives you a sense of a dysfunctional, formerly chosen family, of outsiders with history. There’s little warmth, but occasionally a gleam of yearning which keeps you interested and adds to the tragic elements at play. Kudos to Khaw for the Minds, who think in terms that don’t align with how a species defined by biomatter would think. They don’t feel like somebody trying to imagine how AIs would think if they ruled the universe; they feel like AIs, who are ruling the universe. They’re terrifying and great.

Let’s talk about the prose: It’s incandescent, densely layered, adjectives and metaphor encrusted on the page and the mind’s eye. Although “encrusted” connotes static, this work is anything but static; rather, it’s orchestral, in constant breathless motion. “A million adjectives fettered to the mythic” is a description of one of the characters, but it’s a pretty good description of Khaw’s writing, too. I love when language is poetry, as it is here, and the syncopated melange of curse words, programming language, and stunningly realized images is intoxicating. Occasionally, the language overwhelms the story, and with so many viewpoints and such a quick pace it’s not always easy to follow scene changes. I found myself pausing as often as I found myself staying up late to read what happened next. Make no mistake: I did both these things, but I acknowledge less patient readers might wander away.


Although immortality has been effectively achieved for clone and machine, who gets to be real and who matters are questions this novel wonders about. It also thoughtfully considers whether it’s possible to break free from patterns when they seem hardwired. You won’t get a great sense of location or what everyday life looks like in Khaw’s universe, but you will think about what goes into making a life and what is important. There’s a lot to be introspective about.

The All-Consuming World is a gory, gloriously punk, queer heist story set in an unsettling and cold universe. It delivers thrills and questions. This is Cassandra Khaw’s debut novel, although they’ve published many novellas before, and it’s a worthwhile addition to the sci-fi canon. The ending is abrupt; a sudden stop. But it feels right that this story leaves you with questions unanswered and futures uncertain. The All-Consuming World will consume your attention and linger in your thoughts, a very good ride and a remarkable what-if.