West Philadelphia principal gets ‘National Principal of the Year’ honor 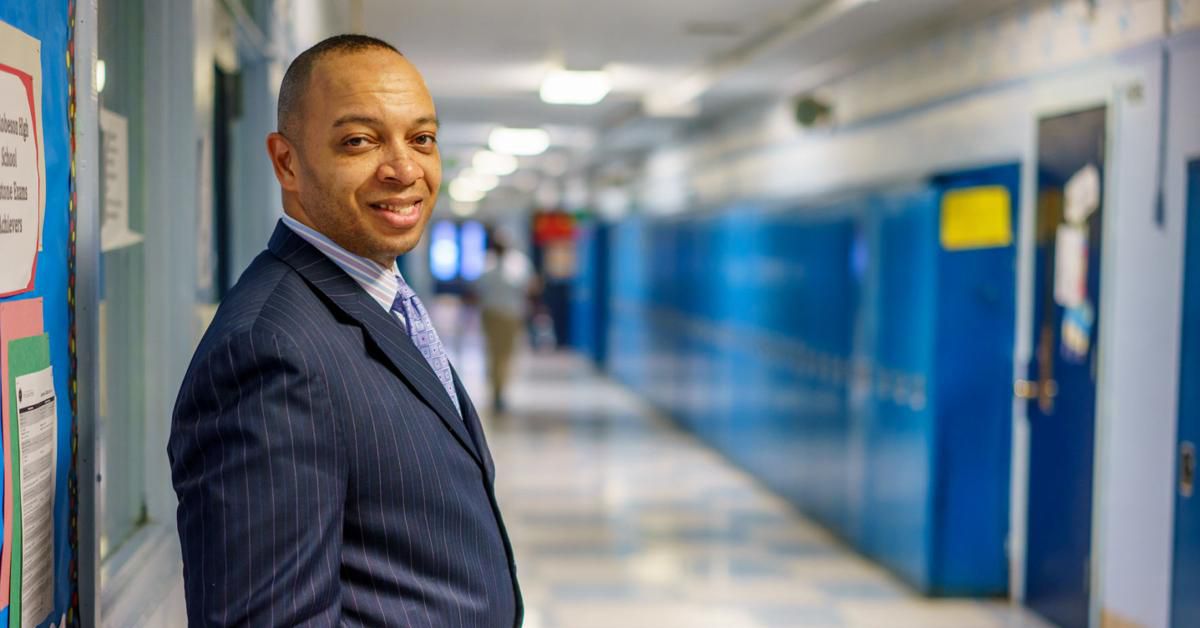 Richard Gordon, the principal of Paul Robeson High School for Human Services in West Philadelphia, has been named 2021 National Principal of the Year.

Tuesday’s announcement was part of the 2020 celebration of National Principals Month and took place during a virtual meeting of Philadelphia principals. Gordon won the statewide award earlier this year.

“Any school turnaround is hard, and it takes a special leader to sustain it,” said Robert Motley, president of the National Association of Secondary School Principals (NASSP), in his presentation of the award. “But Mr. Gordon led Robeson High School’s turnaround under extraordinary political and social pressures, and at no point did he lose focus on the students. Under Mr. Gordon’s leadership, Robeson High School models what personalization was always meant to be. Personalization begins not at the data or at test targets, but at the person — with all their interests, needs, traumas, and dreams. His leadership makes that happen.”

Seven years ago, the school district wanted to close Robeson as part of its consolidation plan. In the end, 23 schools were closed that year, down from more than 30 originally proposed. Robeson was saved after it posted a graduation rate of 90%, among the highest in the city.

Last year, Gordon led Robeson off the state’s list of low-performing schools and onto the list of “high progress schools,” with a graduation rate of 95%. At the heart of Gordon’s success is the school motto “Build Your Own Brand.”

“Richard doesn’t see obstacles, only opportunities,” said Kerensa Wing, last year’s National Principal of the Year who served on the committee that selected Gordon. “His passion for working with kids and helping them succeed is impressive.”

Gordon is most known for turning tragedies into triumphs.

He has established business, community, and dual-enrollment partnerships specific to student needs. In one case, a student who dreamed of working on the NASCAR circuit, and Gordon helped the student get an internship with Girls Auto Clinic, a nationally renowned all-female Philadelphia mechanic shop. They plugged him into the NASCAR circuit in the Pocono Mountains, and he drove in his first professional NASCAR-sponsored race this past summer.

And when two Black men were falsely arrested at a West Philadelphia Starbucks in an incident that made national headlines and resulted in a financial settlement with Starbucks and the City of Philadelphia, the men dedicated $200,000 for seed money to launch Project Elevate through their Action Not Words Foundation. Gordon convinced the men and city leaders to select Robeson for the pilot program to equip the most vulnerable Philadelphians with the financial tools, resources, and access needed to break the cycle of generational poverty.

Through this partnership, student entrepreneurs learn how to write and execute business plans to launch businesses in their communities.

Gordon holds a bachelor’s degree from Lincoln University, and master’s degrees from both Coppin State University and Lehigh University.

Superintendent William Hite said Gordon’s commitment to serving children and families is the driving force behind his success at Robeson.

“From the moment he arrived at the district, principal Gordon’s enthusiasm for creating a positive learning and instructional environment has yielded wonderful results,” Hite said. “We are thrilled to see him receive this recognition and look forward to even greater success for his students and the entire school community.”

Who Is A Good Immigrant, Anyway?

The Dangers Of Life As An American 'Nobody'