Tributes Pour in for Sir Ken Robinson, a ‘Source of Insight, Inspiration and Joy for Millions’ 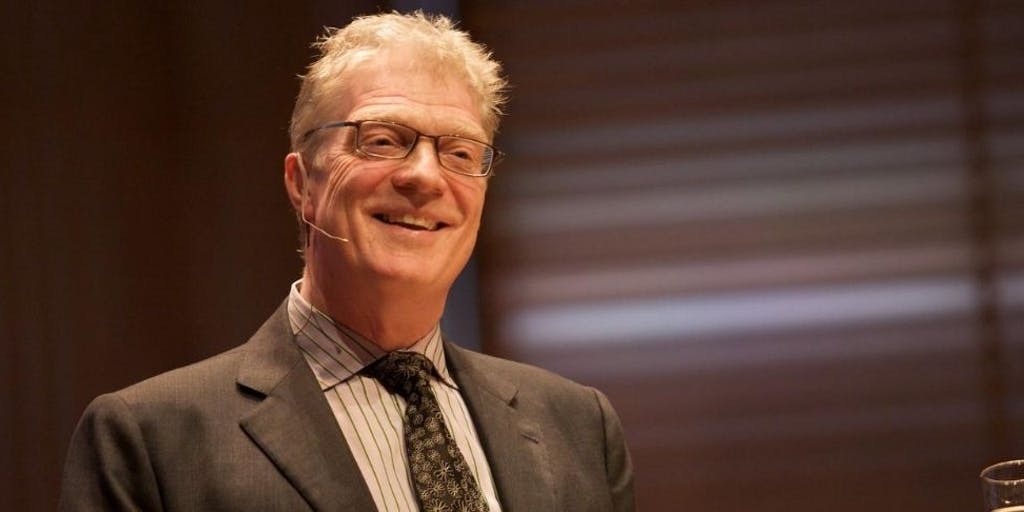 Sir Ken Robinson is the author of bestselling books. He gave the most popular TED Talk of all time and was knighted by the Queen at Buckingham Palace. But his biggest legacy may be the generation of educators he inspired with his clarion call to move schools away from becoming rigid test-prep factories and toward something more artistic and liberating.

After a distinguished career in education spanning more than three decades, Robinson died on August 21, according to a brief note on his Twitter page. The cause was given as cancer. He was 70.

During the last two decades, Robinson gained a worldwide following in education and beyond for his belief that children were born curious, with natural talents that should be nurtured by schools. Though too often, he said, a top-down focus on math, reading and testing, at the expense of the arts and creative pursuits, stifled their abilities.

“We’re now running national education systems where mistakes are the worst thing you can make,” he said in his 2006 TED Talk, which has been watched more than 85 million times online. “The result is that we are educating people out of their creative capacities.”

Robinson was well known for his dry observational wit that poked at education’s many ironies and axioms. In a TEDx talk in his native Liverpool, he once remarked, “I often tell politicians: If you want to stop the problems in education, stop causing them.”

Yet Robinson saw many bright spots as well. He peppered his talks and writing with inspiring anecdotes of children who were taught to realize their potential and of the educators who helped get them there. In his 2016 book “Creative Schools,” he wrote of the teacher, Rafe Esquith, whose 9- and 10-year-old pupils swore off television so they could learn Shakespeare’s “The Tempest” for a performance, as well as the British principal who transformed his school into a working “town,” where kids immersed themselves in actual jobs.

Speaking of Esquith, Robinson wrote that he “knows that teaching is not just a job or a profession. Properly conceived, teaching is an art form.”

Following the announcement, tributes began pouring in from educators, friends and those who were touched by his humor, his kindness and his dedication to improving the way we think about education.

“Sir Ken Robinson has been a source of insight, inspiration and joy for millions,” said Ted Dintersmith, the author of “Most Likely to Succeed,” who co-founded a nonprofit, Boundless, with Robinson, in a statement. “His loss is immense, at a time when we are so in need of him and his sunny message. His remarkable impact will endure, but he’s leaving this world far too soon. My heart goes out to his great family, who have had a ringside seat to his contributions, and saw daily what we all saw—a wonderful, lovely man with a very important message, delivered in such a charming, powerful way.”

“I think we all have an opportunity and an obligation to carry on his transformational work,” he added.

In a message posted to Twitter, Mitchel Resnick, a professor at the MIT Media Lab and a developer of the Scratch programming language, expressed his sorrow at the news. “He helped so many people understand and appreciate the importance of nurturing children's creativity. May his ideas and stories live on forever.”

“I had the pleasure of being in the presence of Sir Ken Robinson multiple times,” said Karen Cator, CEO of education technology nonprofit Digital Promise, in an email. “His calm, matter-of-fact, almost gentle approach to encouraging us to not kill creativity was tremendously effective. He put education on the TED Talk map and deeply valued imagination and the human spirit. I will miss him and am grateful that his voice and ageless message lives on.”

In a short statement to EdSurge, Khan Academy founder Sal Khan said, “Ken taught us all to look at education in a new, far more human light. And he did this with both a sharp intellect and sharp wit, teaching us all to not take ourselves too seriously in the process.”

Many educators credited him with inspiring them early in their careers, and shared quotes and heartfelt stories of brief encounters and lasting impressions. “If you’re not prepared to be wrong, you’ll never come up with anything original,” read one quote favorited hundreds of times on Twitter.

“What a great loss for educators everywhere,” wrote Sheryl Abshire, a speaker and former chief technology officer in Louisiana, on Twitter. “I was fortunate to be in the company of and hear this great man speak several times. His wisdom, his wit and his considerable contributions will be missed.”

Above all, Robinson was a tireless believer that education was not lost in a state of permanent decline but capable of constant, iterative improvement. And he believed each educator can play a big part in that development.

“When you stand there with your children, your class, what you do next is the education system so far as they’re concerned,” he told EdSurge in 2018. “And I know it’s layered, but as you start to engage them, you are the system and what you do next is up to you.”