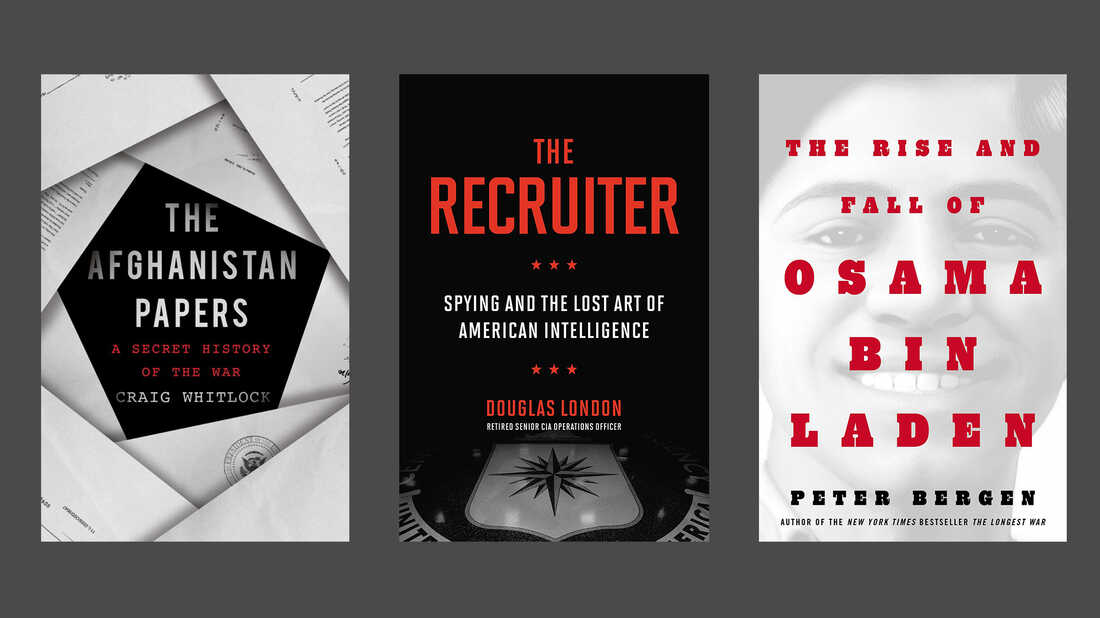 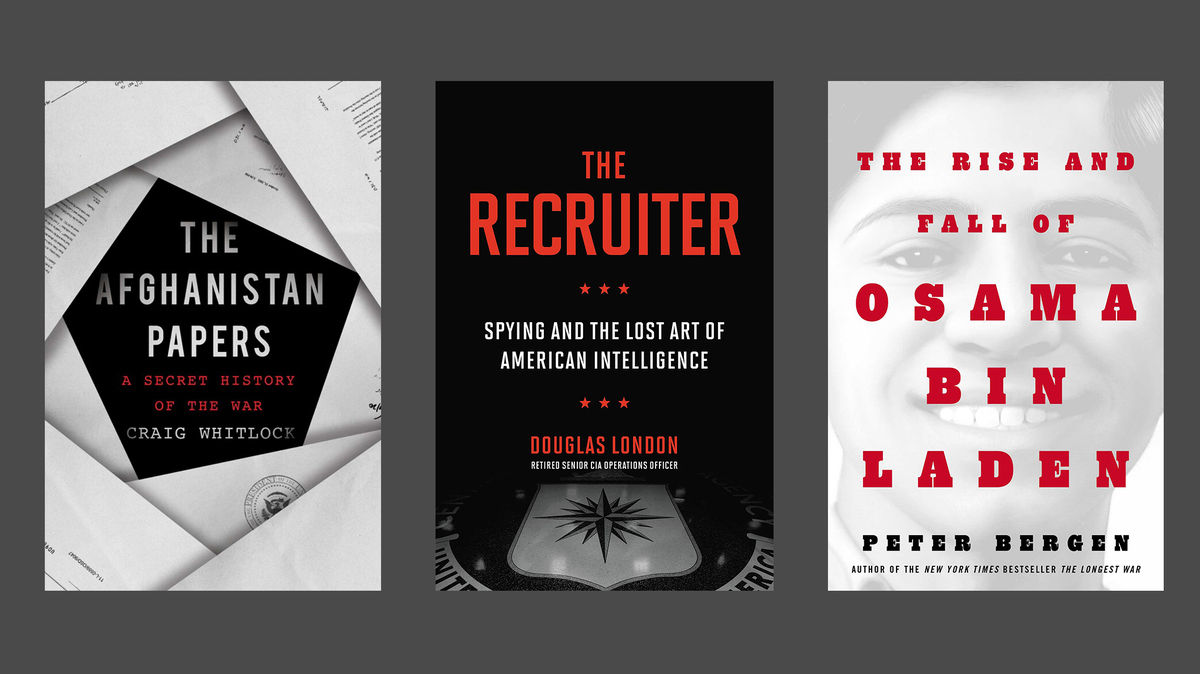 The Taliban takeover of Afghanistan encapsulated much of the past two decades. A war that began remarkably well for the U.S. had long since turned messy, frustrating and complicated, expanding to include a sprawling mix of goals and aspirations that never really went according to plan.

The global war on terror. The invasion of Iraq. Nation building. Black site prisons and Guantanamo Bay. Drone strikes across the Islamic world. Feuds over domestic surveillance and privacy. The rise of bitter partisan politics in the U.S.

Many books have documented these developments and more are on the way.

Here we point to three very strong new offerings that provide a detailed accounting of events that have largely defined the U.S. role in the world in the first part of the 21st century: The Rise And Fall Of Osama bin Laden, by Peter Bergen; The Afghanistan Papers: A Secret History Of The War, by Craig Whitlock; and The Recruiter: Spying And The Lost Art Of American Intelligence, by Douglas London.

None makes for cheery reading, but all offer sobering lessons.

Lesson One: The U.S. has weakened the extremists

In the wake of 9/11, the universal fear was the U.S. would be hit with additional waves of attacks.

But they never happened. According to Peter Bergen, the only lethal attack in the U.S. directly carried out by al-Qaida — or any foreign terrorist group — was the 2019 shooting at the Pensacola Naval Air Station by a visiting Saudi aviation student, which killed three people.

Home-grow Muslim extremists have killed more than 100 Americans, though none had links to al-Qaida or other terrorist groups, Bergen adds.

“The United States was insulated from a recurrence of a 9/11-scale attack because bin Laden’s decision to carry out the operation significantly increased the size, power and funding of the U.S. national security state,” writes Bergen.

Bergen sees this as an underrated success. But he’s a critic of many ways in which the U.S. has fought terrorism.

Bergen was part of a CNN team that interviewed bin Laden, face-to-face, in Afghanistan in 1997, when the al-Qaida leader declared war on the U.S. More al-Qaida attacks followed. The CIA warned the president repeatedly in the runup to 9/11.

After under-reacting before 9/11, the U.S. over-reacted in many ways in the aftermath. Bergen sprinkles telling details throughout his book.

Bergen has tracked every nugget related to bin Laden for a quarter-century. This includes poring over nearly a half-million documents found at bin Laden’s compound in Pakistan, where U.S. Navy Seals killed him.

He wonders whether the Afghan war would have played out differently if the U.S. had captured or killed bin Laden in the early days, when the al-Qaida leader appeared trapped in the Tora Bora mountains of eastern Afghanistan.

“After all, the Afghan War had started because the Taliban would not give up bin Laden, and with bin Laden no longer on the battlefield much of the energy about avenging 9/11 would likely have dissipated,” writes Bergen. “A peace deal with Taliban might have been more achievable in the years immediately after 9/11 if the Taliban’s alliance with al-Qaida was no longer an issue.”

Who knows? But it brings us to lesson No. 2.

In the decade leading up to the 2001 attacks, the U.S. largely ignored Afghanistan as a hopeless mess. Yet just a month after al-Qaida struck, the U.S. invaded. And several weeks later, the U.S.-led operation drove the Taliban from power, scattered al-Qaida to the hills, and paved the way for the U.S. to help install an allied government.

So quick, so successful. But what was the mission at that point?

“By 2002, few al-Qaida followers remained in Afghanistan,” Whitlock writes. “The United States and its allies were left fighting the Taliban … So for the next two decades, the war in Afghanistan was waged against people who had nothing to do with 9/11.”

Whitlock is unsparing in his assessment of presidents Bush, Obama and Trump, as well as U.S. military leaders, saying all failed to level with the American public.

“U.S. leaders knew their war strategy was dysfunctional and privately doubted they could attain their objectives,” he writes. “Yet they confidently told the public year after year that they were making progress and that victory — winning — was just over the horizon.”

Whitlock’s book is based on hundreds of “lessons learned” interviews conducted privately by the Special Inspector General for Afghanistan Reconstruction. When Whitlock learned of them, the Post sued the U.S. government to get them released, and eventually won.

The candid interviews are revealing.

Douglas London spent 34 years at the CIA, with the 2001 al-Qadia attacks falling right in the middle and prompting a sharp change of direction at the spy agency.

For his first 17 years, the CIA emphasized its traditional pursuits — stealing secrets and analyzing them, London writes in The Recruiter. But after 9/11, he adds, the priority was catching and killing terrorists.

“The most damaging impact has been the CIA’s cultural change from primarily identifying itself as America’s premiere civilian spy service to behaving like a paramilitary organization,” London writes.

He was very much part of this transformation. At the time of his retirement in 2018 he was the CIA’s counterterrorism chief for Afghanistan and the wider region.

Successive U.S. presidents and CIA leaders were enamored with the agency’s increased firepower, be it from drones or beefed up paramilitary operators.

CIA officers took “risks in conflict zones throughout the world, suffering casualties along the way,” he writes. But, he adds, this largely replicated what the military was doing and “came at the expense of foreign intelligence collection needed to avert such crises in the first place.”

The CIA’s emphasis on counter-terrorism operations led to well-documented abuses, like the waterboarding of terror suspects at black site prisons.

London acknowledges these stains, but devotes more of his time to less visible consequences. He says the CIA’s senior ranks are now filled with officials whose defining jobs were counterterrorism.

They’re experts on Muslim extremists, but less so when it comes to China, Russia and cyber threats.

London calls for the spy agency to revert to its traditional mission of collecting and analyzing intelligence, while looking to dangers on the horizon.

“We must see all threats in the bigger picture and with appropriate balance,” London writes. “Whereas Russia, China, and perhaps now even North Korea and Iran, are potential threats to our country’s existence, terrorism is not.”