This Detroit math teacher’s formula for connecting with students: forgiveness and a love of sports 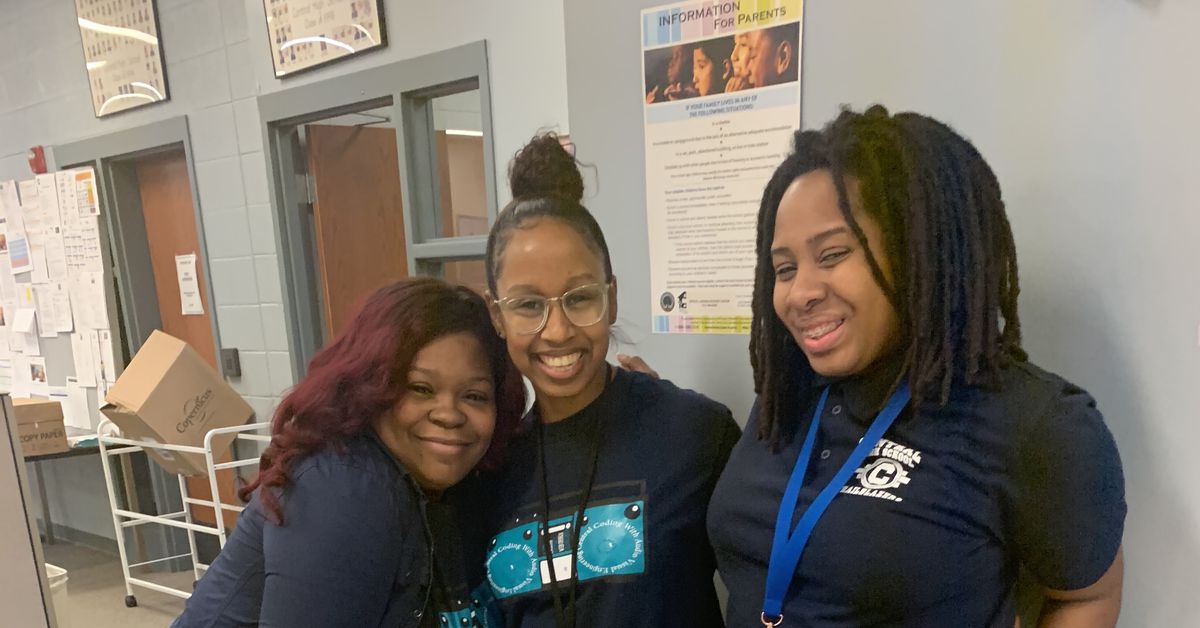 There are no bad yesterdays in Raven Fisher’s virtual high school math classroom.

Bad days? Sure. There’s an ongoing pandemic, for one thing, she’s teaching in a new virtual format, and many of her students at Central High School in Detroit are still building their fundamental math skills.

But Fisher has cultivated a short memory for the tough moments.

“I’m always like, ‘Okay, tomorrow is a new day. Yesterday was horrible, but today, everything is brand new,’” she said.

That attitude has seen her through five years as a teacher in the Detroit Public Schools Community District, where she’s known for developing especially strong bonds with students in the classroom.

Her relationship-building strategy involves forgiveness, a spirit of collaboration, and sports.

If her students are athletes, she stops by their games, building a rapport with them that comes in handy when they are struggling with a math concept.

If that doesn’t work, she isn’t afraid to ask for their help, telling them: “What I’m doing right now, we both know it isn’t working. So what can we do differently?”

We spoke with Fisher about her favorite bouncy ball lesson, her path into teaching, and her stance on whether students should keep their webcams on during virtual class.

This interview has been lightly edited for length and clarity.

Was there a moment when you decided to become a teacher?

I was working in high school at a summer camp where they paid kids to come and improve their foundational skills. I got hired as an assistant for the math class. That’s when I realized, “Hey, there’s a lot of kids with problems with their foundational math skills.” I was pretty good at math at a time and I was like, “Ok, this is where I’m needed.”

How do you get to know your students?

I ask, “Who has a game today?” Even though we’re in virtual learning, I try to go to at least one of their games, as school sports are still taking place. I’ve been to a football game, a cross country meet, a volleyball game. I still need to go to a swimming meet.

They really like it. It’s always nice to see someone in the crowd who they sort of know.

With the pandemic, I had to be like, “Which one [is my student]? Let me see your face.” Because a lot of the kids don’t turn on their cameras.

How do you think about whether students should turn on their webcams during virtual class?

I highly recommend it, but I don’t require it because you never know what’s going on in a student’s home. On computers you know you can take screenshots, and you don’t want a student to be the victim of bullying.

Plus, a lot of students who I know from last year have gained more confidence with their cameras off. I’m not sure why, but they’ve been speaking up with their camera off. I think it just really depends on the student.

Tell us about a favorite lesson to teach — this can be pre-COVID or virtually. Where did the idea come from?

We have a new curriculum now. In one of my favorite lessons the students bounce a bouncy ball to learn about exponential decay. It gets the kids really active. They’re up and out of their seats, and they really get a visual.

A lot of students started using their phones, and [filming] in slo-mo. They even started taping rulers up against the wall. They started using other skills to do the math. It was really cool.

What’s something happening in the community that affects what goes on inside your class?

I’ll get a lot of students saying, “Hey, I can’t make it to class today because so-and-so passed away.” I’m not sure if people are passing because of COVID, but I’ve been getting a lot of messages about that.

And I can’t see their faces so I can’t say, “Hey, so-and-so looked really down today, let me go and talk to them.”

Some students are willing to say, “Hey, this happened to me, can I have a little bit more time?” But there are others who aren’t saying anything, and you don’t know if they’re okay, and if they’re just not doing the assignment or if there’s something going on with their lives.

That’s big during the pandemic, just not knowing what’s going on with your students.

Tell us about your path to the school where you’re currently teaching.

I feel like I should be where people need me. I feel like I can be of the most assistance in Detroit. I can remember college professors asking me, “Are you sure you want to go to Detroit to teach?” My mom asked me several times during college — ”Are you sure about this Raven, are you sure?” I had to say “yes” a lot of times.

Plus, when I was in high school and college I never had a Black math teacher, or a Black female math teacher, and I just feel like our kids should have teachers who look like them.

During the pandemic, a lot of students are writing in the chat, they’re explaining their mathematics in paragraph form. It’s not just numbers and symbols. I’ve learned that sometimes that’s a lot better than having them solve an equation.

Knowledgehook, the world’s most comprehensive mathematics learning platform, has raised £13.5m Series A equity funding, led by a UK-based EdTech...

According to the NEA, at least 10 million students ages 13–18 were suffering from depression, anxiety, attention-deficit/hyperactivity disorder (ADHD), or...

Texas International Education Consortium has launched an initiative to train professors at Ghana’s Kwame Nkrumah University of Science and Technology in online...

Erasmus+ ICM inclusivity to be improved

Improvements will be made to the inclusiveness of International Credit Mobility in the next Erasmus+ program, with new funding around...

OPINION: Teachers will need to focus more on how students are feeling in these tough times

Back in March, after schools closed their doors and transitioned to remote learning, one question loomed large for educators when...

As the school calendar rolls on and the time for new course proposals and curricular revisions nears, take a minute...

Chicago is weighing whether to reopen schools. Can it move forward without the consent of its teachers?

UNHCR calls for protection, support for civilians affected by violence in southern Afghanistan