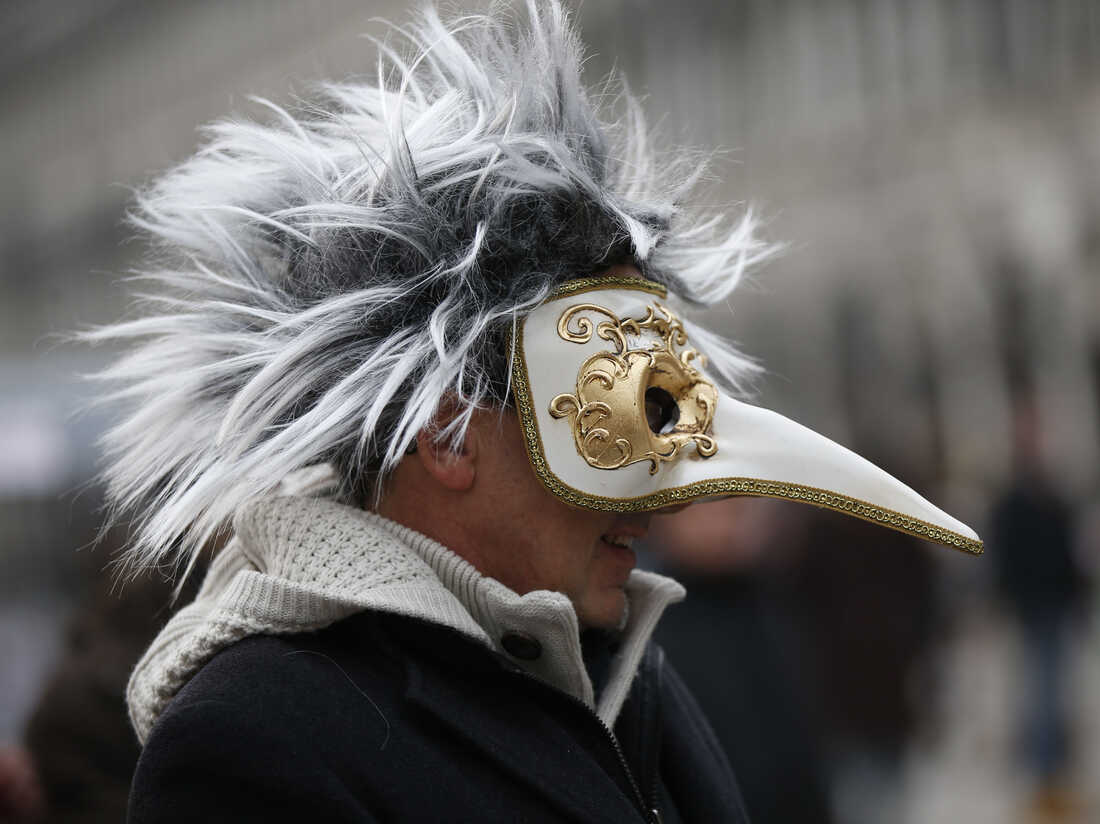 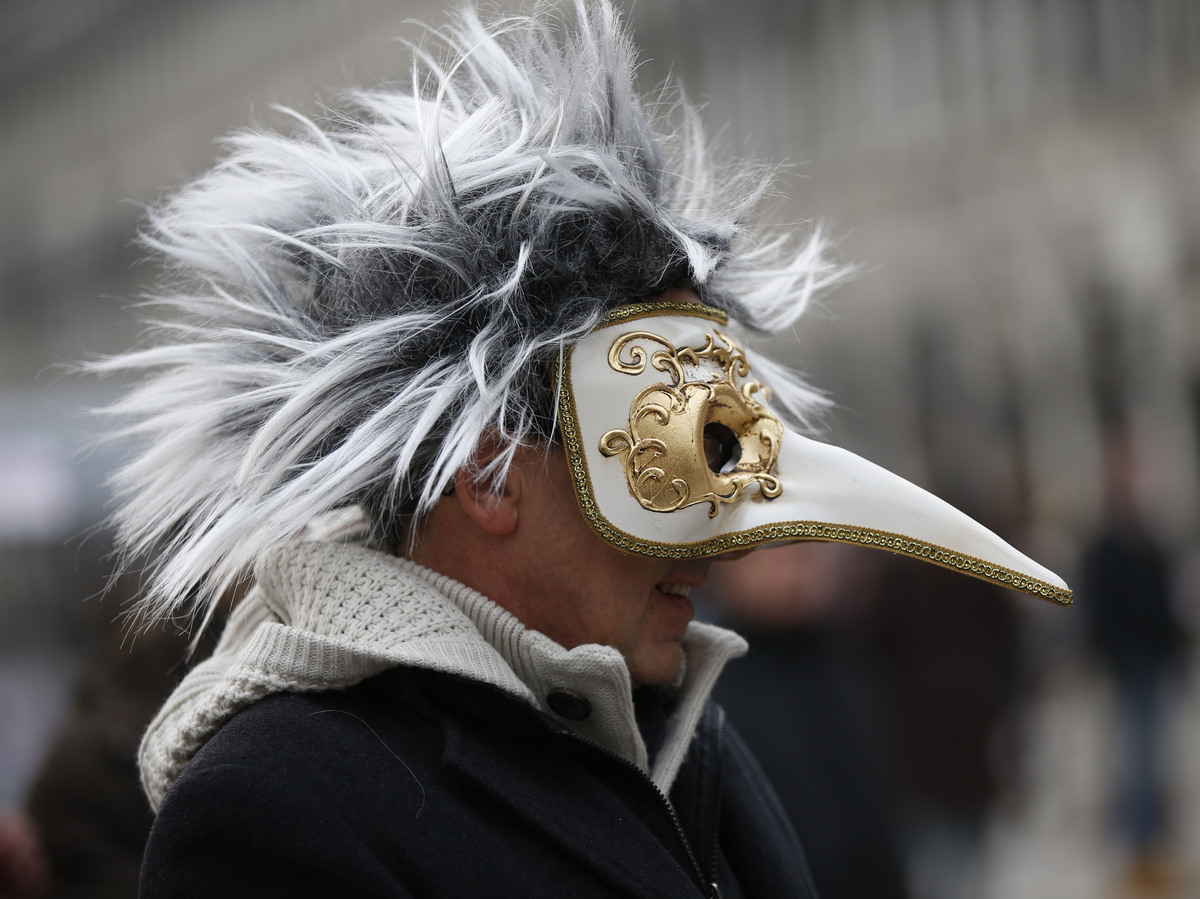 A man wears a pest doctor mask in St. Mark’s Square in Venice. Venice’s central place in the history of battling pandemics provides a relevant backdrop to this year’s Venice Film Festival, which opens Wednesday.

VENICE — Visitors to Venice could be forgiven for not realizing that beyond the majesty of St. Mark’s Square and the romance of gondola rides lies a city that helped provide a baseline of what the world knows today about containing pandemics.

It was here that the term “quarantine” was coined, after merchant ships arriving in the 15th-century Venetian Republic were moored for 40 days (“quaranta giorni” in Italian) to see if their crews were afflicted with the plague. It was here that the first isolated pestilence hospital was built on a solitary island in the lagoon, a precursor to today’s COVID-19 isolation wards. And it was in Venice that 16th-century doctors donned beak-nosed masks filled with aromatic herbs to cleanse the air they breathed when treating the sick — an attempt at self-protection that today is the favored choice for Venetian Carnival costumes.

Venice’s central place in the history of battling pandemics provides a relevant backdrop to this year’s Venice Film Festival, which opens Wednesday with the premiere of Pedro Almodovar’s in-competition film “Parallel Mothers.” Almodovar developed the project during Spain’s 2020 coronavirus lockdown, one of the harshest in the West.

In a pre-opening screening Tuesday, Italian director Andre Segre presents a short documentary shot last year showing how Venice organizers coped with COVID-19 to stage the first and only in-person international film festival during the first year of the outbreak, a limited affair that nevertheless showed it could be done. Cannes came back to life this year after skipping 2020, and other big festivals went largely virtual after the pandemic erupted. 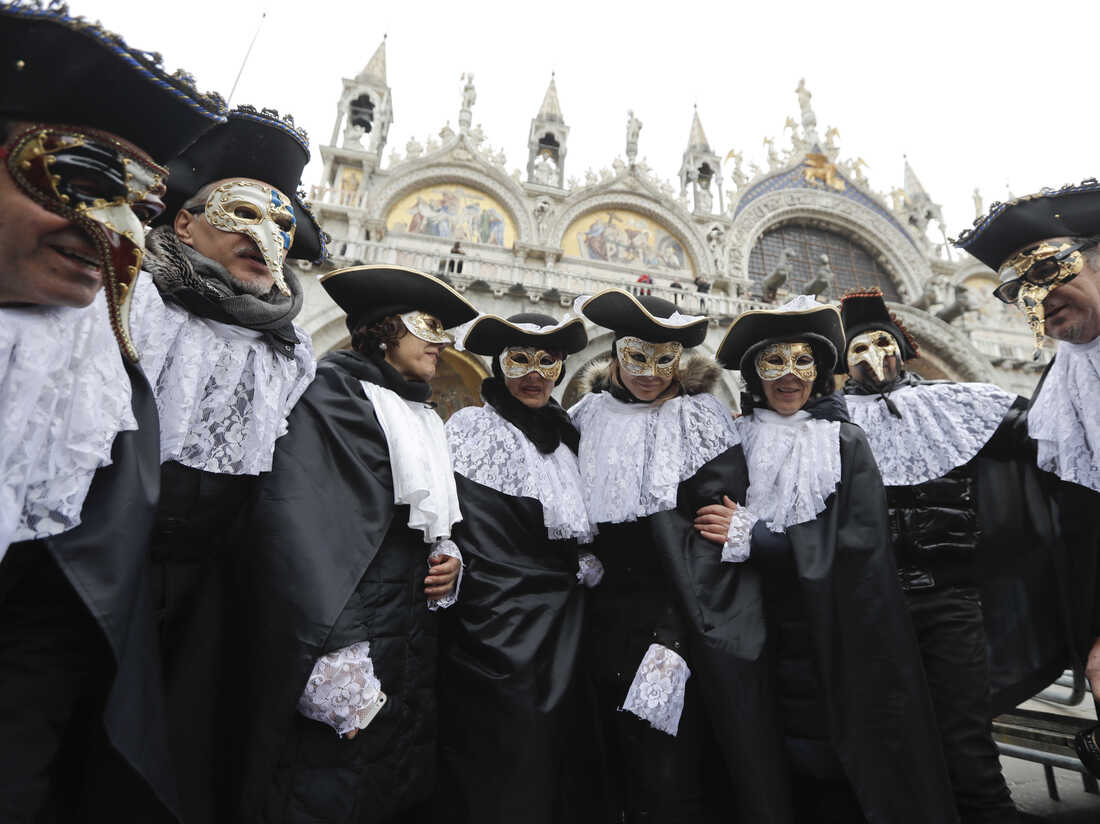 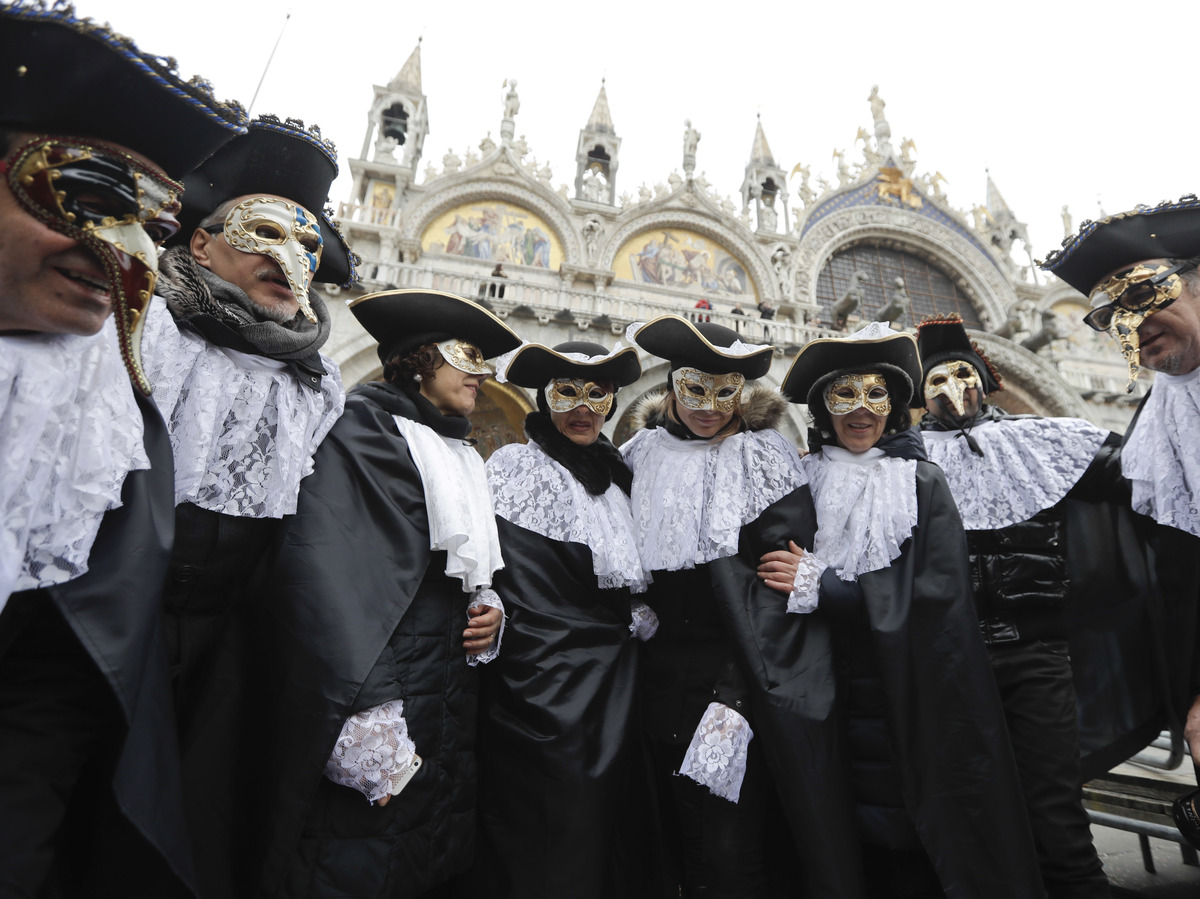 Men wear masks, some of them pest doctor masks, in St. Mark’s Square in Venice.

Similar precautions are planned for this year, with a huge barricade once again sealing off public access to the red carpet and limited chances for fans to catch VIP water taxi arrivals on the Lido. More than 10 testing stations have been set up for staff and festival-goers, who must show proof of a negative test, vaccination or having recently recovered from COVID-19 to enter screenings. Masks are required indoors.

In other words, the Venice show is going on — other premieres at the world’s oldest film festival include the debut of Denis Villeneuve’s “Dune” and Kristen Stewart as Princess Diana in “Spencer” — even as Italy copes with new infections driven by the highly contagious delta variant.

For Venice, though, it’s really nothing new.

“The history of Venice is a history that teaches us how our city, first among European capitals, understood ahead of time how to manage viruses,” said Simone Venturini, Venice’s tourism chief. “These recurrences are studied and recalled even more today because the Venetian model is a model that paradoxically is still used.”

Beginning with the first confirmed plague to strike Venice — the 1348 outbreak that killed at least a third of its population — the city put in place containment measures even without understanding epidemiologically how it spread, said Fabio Zampieri, a history of medicine professor at the University of Padua Medical School.

Based on the belief that “bad air” was to blame for what became known as the Black Death, Venetian authorities closed churches and restaurants, canceled religious processions and ordered a thorough cleaning of homes and public venues, Zampieri said.

During the pestilence that erupted in 1423, Venice’s senate decided to lock down the whole city, prohibiting entry of people from suspected plague-ridden places and punishing locals who gave sick foreigners shelter with six months in jail, he said. A year later, Venice opened the first “lazzaretto,” a hospital on an isolated island in the Venetian lagoon dedicated exclusively to plague victims. 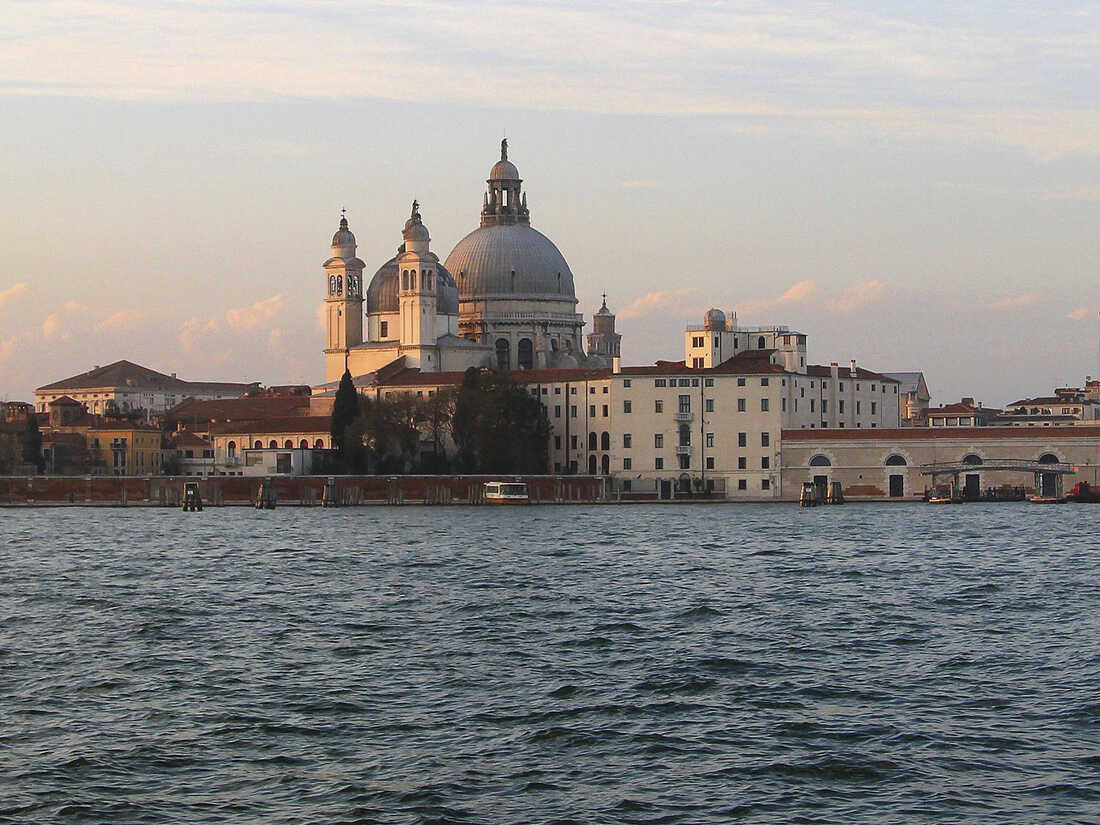 The Basilica di Santa Maria della Salute (St. Mary of Health) at sunset as seen from the water to the south. The church, built after plague broke out in the 17th century, is a fixture of the city’s skyline. Michelle Locke/AP hide caption 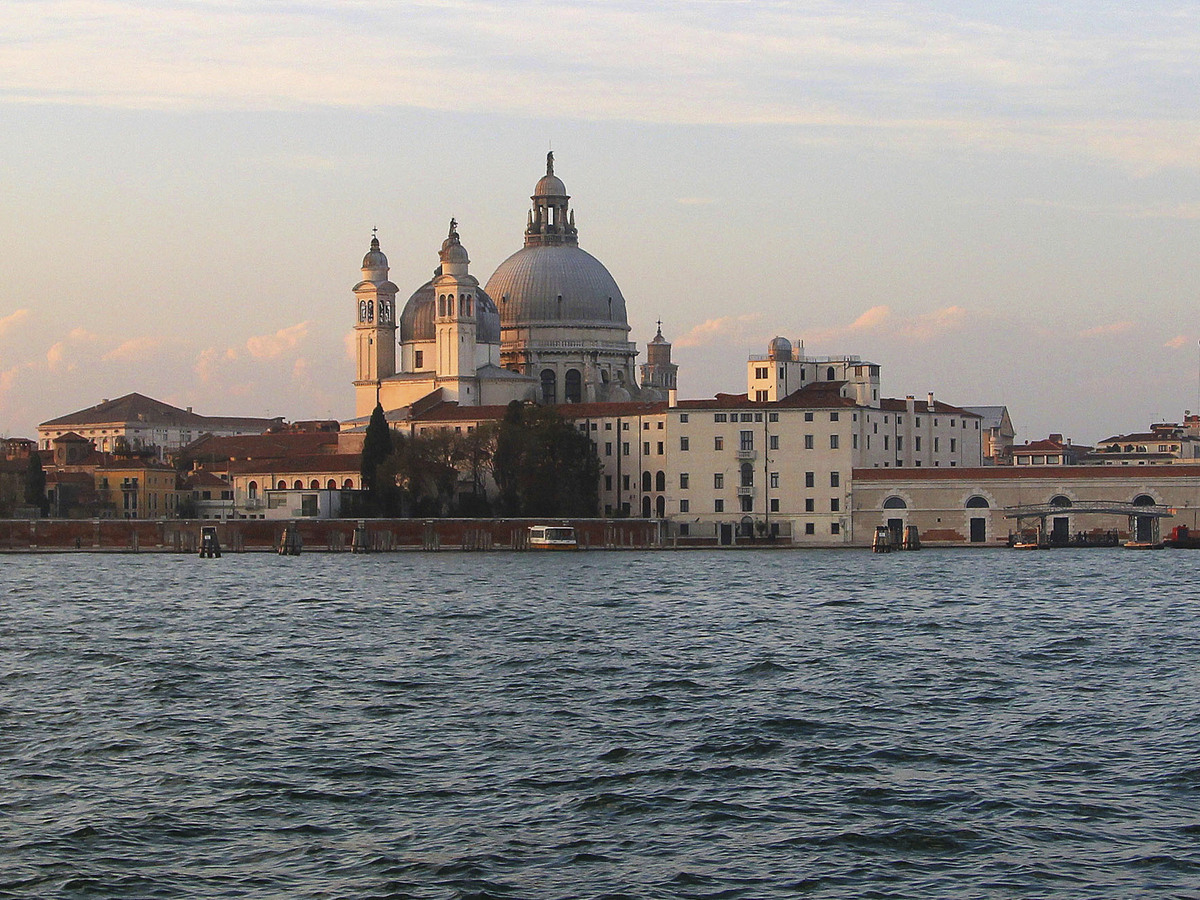 The Basilica di Santa Maria della Salute (St. Mary of Health) at sunset as seen from the water to the south. The church, built after plague broke out in the 17th century, is a fixture of the city’s skyline.

That concept would transform years later into a proper quarantine, an isolated place for people merely suspected of carrying the plague — crews of merchant ships — to wait out 40 days of surveillance while their cargo was disinfected, he said.

During the 1575-1577 plague, doctors increasingly used the beak-nosed masks filled with aromatic herbs to try to protect themselves from the sick, still not realizing that the plague was carried mostly by bacteria-infected fleas on rats, not “bad air.”

After the 1630 pestilence again wiped out around a third of the population, weary Venetians gave thanks to the Virgin Mary that even more lives weren’t taken: They built the Santa Maria della Salute (St. Mary of Health) church across the Grand Canal from St. Mark’s Square, one of the city’s most visible and iconic images.

The central location of the huge, white octagonal domed basilica at the tip of Venice’s custom’s port was entirely intentional, to show the city’s gratitude that it had once again survived and rebounded from the pestilence, said art historian Silvia Marchiori, curator of the Venice Patriarchate’s Manfrediniana museum.

“When you arrived in Venice, you arrived from the sea, not land, so you had to notice this great temple that was built in white Istrian stone to attract attention,” she said.

To this day, Venetians venerate an icon of the Madonna in the basilica during one of the city’s main religious festivals on Nov. 21, a day dedicated to offering prayers for good health, she said.

Whether by prayer, public health policy or discipline, Venice as a whole fared relatively well during its latest pandemic. The city took the extraordinary decision in February 2020 — when coronavirus was just beginning to be detected in northern Italy — to cancel its famous Carnival. It stayed locked down during the worst of the pandemic, watching as neighboring Lombardy and even parts of the surrounding Veneto region got slammed with infections and deaths in one of Europe’s worst-hit countries.

Venice has been rewarded with a steady return of visitors this spring and summer, just in time for celebrations marking the 1,600th anniversary of the founding of the city, the film festival, sailing regattas and star-studded fashion shows by Valentino and Dolce & Gabbana.

It’s all part of Venice’s efforts to attract visitors who stay, spend and appreciate the city’s history and artistry, rather than day-trippers who take a gondola ride down the Grand Canal and call it a day, said tourism chief Venturini.

“These are the pillars on which we’re building a post-COVID tourism,” he said.