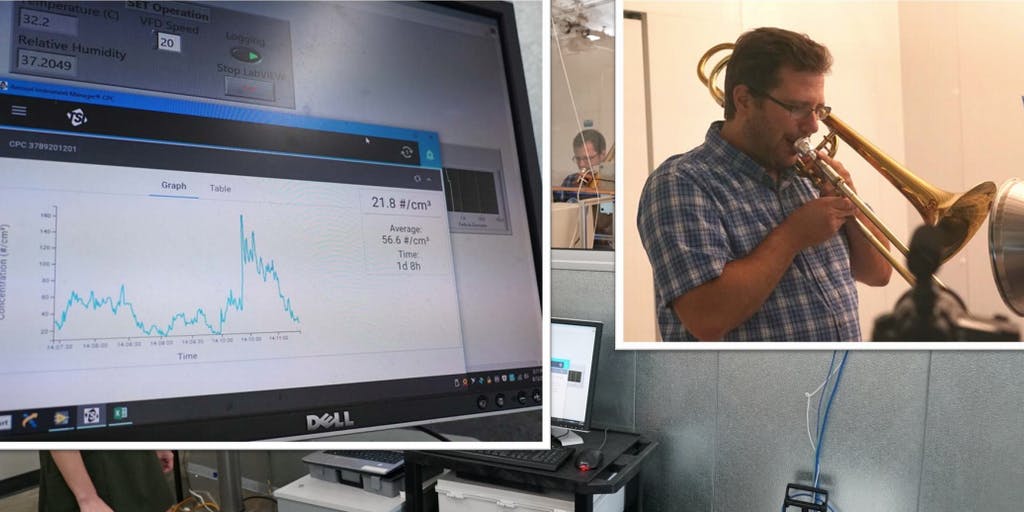 Many college and high school bands have resumed practicing during the pandemic. But doing so safely involves plenty of challenges.

In many bands, not only does everyone have to wear a mask, but just about every instrument has to wear a mask as well, thanks to sometimes improvised coverings on saxophones, and trumpets without deadening their sound. But there remain unanswered questions about whether instruments can spread COVID-19 particles through the air.

So scientists around the country have been teaming up with band educators to try to test what is and isn’t safe when it comes to music education, and what kind of protective gear or PPE works.

Dan Goble, a saxophone player and the director of the School of Music Theater and Dance at Colorado State University, is part of one of those research efforts. (Another major study is going on led by the University of Colorado and the University of Maryland.) Goble and other musicians have been playing in carefully sealed labs called “clean rooms” to measure just what particles come out of various musical instruments.

Typically, experiments like this would go through careful peer review before being published. But band and music educators at schools and colleges need this information now if they want to teach safely. So the researchers are publishing data frequently—even as they do the experiments. Findings have been distributed by groups like the College Band Directors National Association, or CBDNA.

Goble talked to EdSurge about how the study works, what the initial findings reveal and why it’s important to keep the band playing on.

Listen to this week’s episode on Apple Podcasts, Overcast, Spotify, Stitcher, Google Play Music, or wherever you listen to podcasts, or use the player on this page. Below are lightly edited highlights from the conversation.

EdSurge: Why is it so important to keep the band playing at colleges and to keep music classes going?

Goble: The ramifications of not being able to have performing arts and visual arts education are huge because the music and the art, the theater, the dance—it has to come from somewhere. It doesn’t come out of a vacuum. So if we’re not able to do these things at the college level, we’re not training musicians.

It would surprise a lot of people to know that musicians of all genres come from university music programs, not just classical or jazz music. And … to lose that would mean we would have a year or two or three year gap.

And then that trickles down into [training K-12 teachers in] music, education, art education, dance and theater. A lot of our students in the universities are majoring in performing arts and visual arts education. But if they’re unable to make it through school or continue, then suddenly there is an incredible shortage in the public schools and private schools.

It’s so much about maintaining really effective arts programs in the United States. They’re critical also for the 97 percent of the students who participate in the arts in schools who don’t go into them as a profession, but in how much that enhances their lives … and teaches them how to work in groups and collaborate and how to really strive for excellence in everything that they do.

How does the experiment work?

We have at CSU one of the very few class-100 clean rooms in the country. It’s basically a place where you can go and they filter out as much of the latent background aerosol emissions as possible. And then we play our musical instruments into a collection device that funnels droplets—really, really small, we’re talking about like one micron and lower that are measured. And we have every single subject in the test speak for about three minutes to get a background of what is produced by this individual speaking. We do that with a mask on and without a mask on to see the difference. Then we have everybody saying happy birthday for about three minutes, to get a base level for singing.

What are you finding? Are some instruments safer than others?

So it’s pretty obvious when you play a wind instrument, there are more emissions than when you’re just speaking. And when you sing, it looks like based on preliminary data that you produce more [emissions] than just normal speaking, and we’re going to test another 75 or so people to make sure that there's a really good data set for peer review.

To backtrack though, we don’t know [that the virus can travel through aerosol spread by instrument playing]. There’s some pretty good solid anecdotal evidence, but again, there has never been yet, to the best of my knowledge, a verified, peer-reviewed scientific study. But our aerosol engineers and scientists seem to be coming to that conclusion. So that’s why we’re being so diligent about this. We want to make sure we do everything we possibly can as educators to not put our students, faculty, staff or their families in harm’s way. So I think that’s why a lot of schools are really taking extreme measures. And I think that’s a good idea.

Hear the rest of the interview, including more of the research findings, on the EdSurge Podcast version.

5 Artist Animators Your Students Will Love