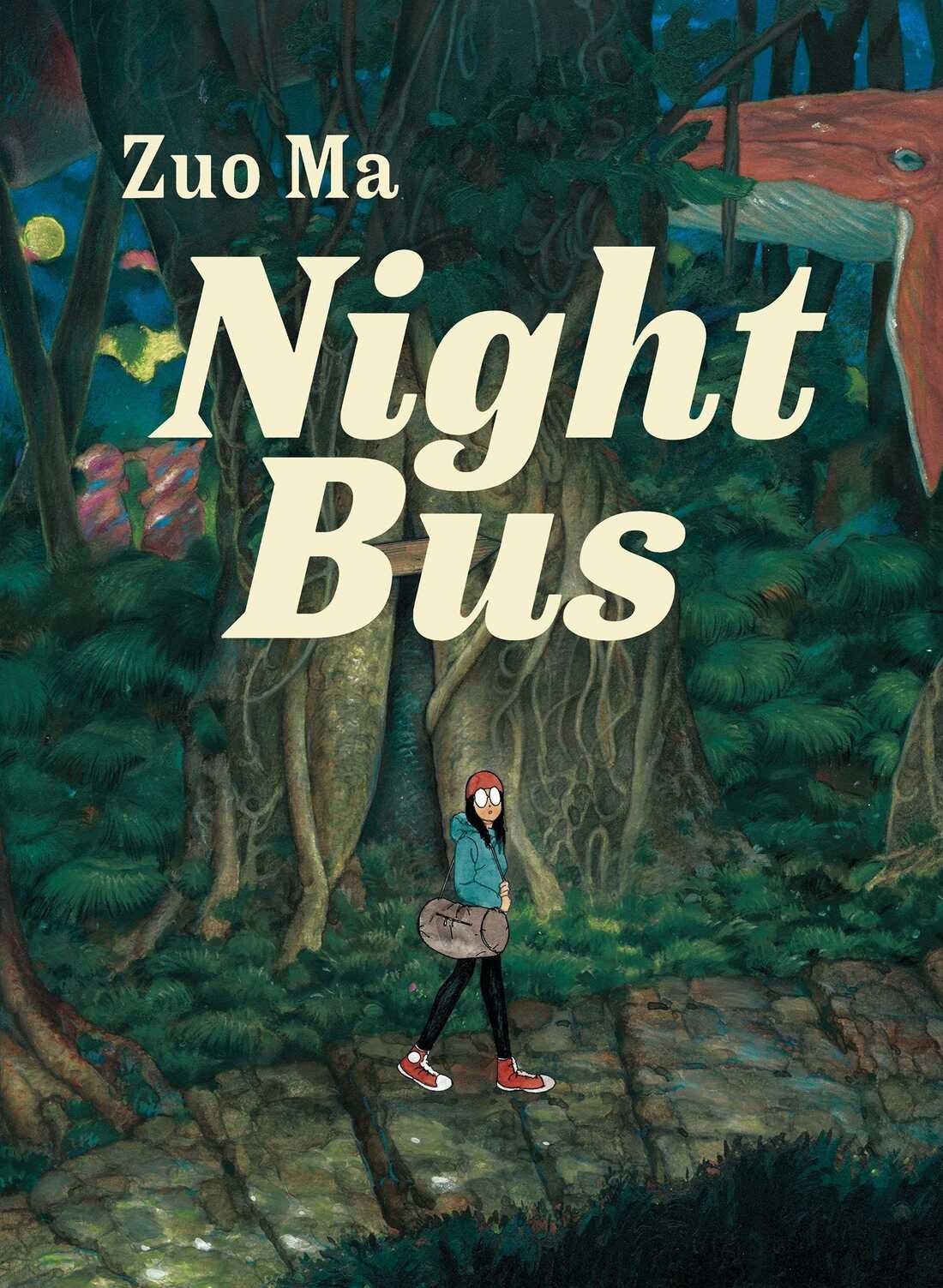 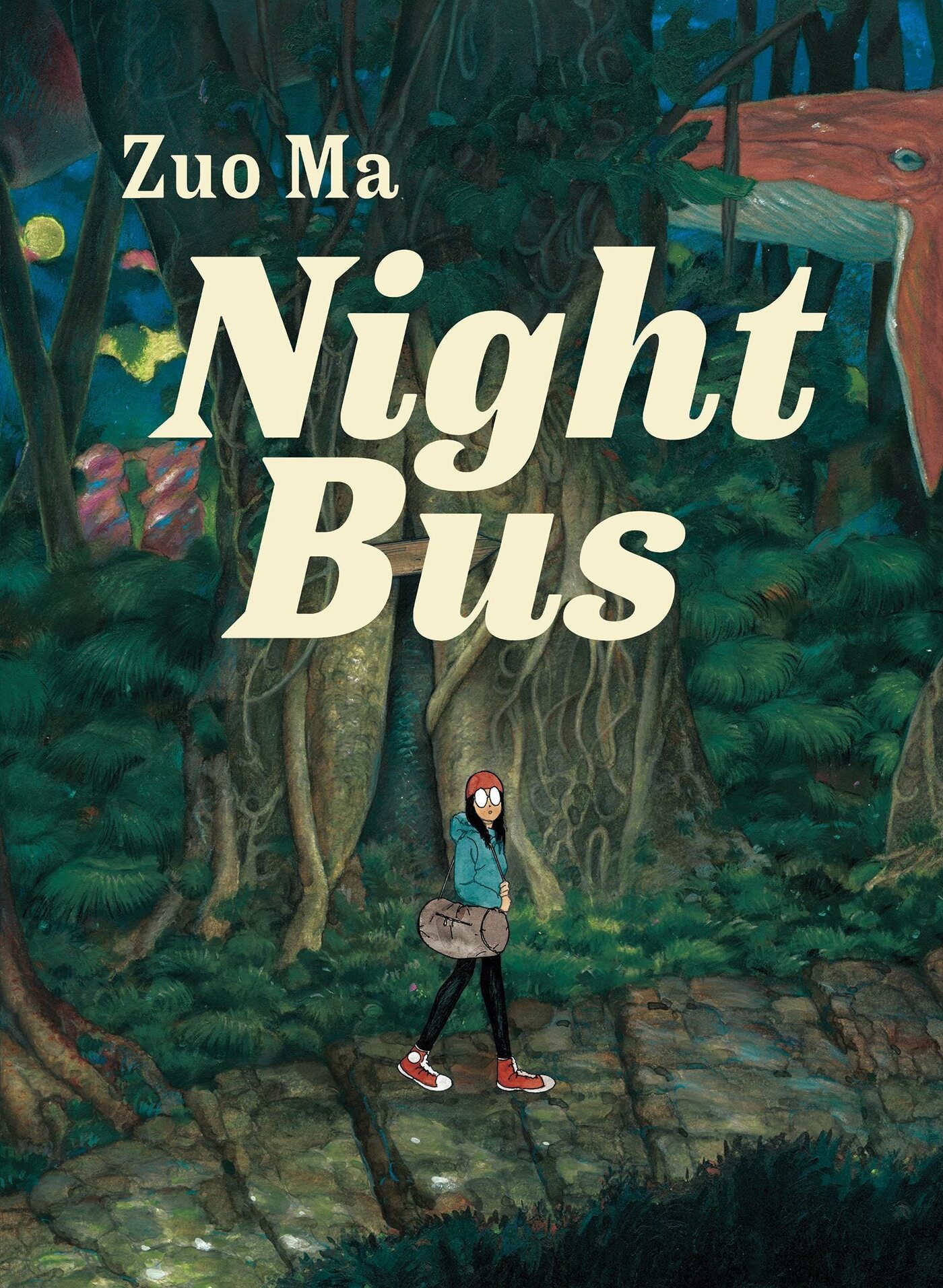 “If I could put it into words, I wouldn’t be drawing it,” is how Zuo Ma’s alter-ego expresses his refusal to impose linear structure on the meandering dreamscape traversed by Night Bus — the Chinese comic artist’s collection of 11 lushly-drawn stories. Deftly translated by Orion Zuortin, Zuo’s tales are literally eye-opening trips that embody Proust’s yearning in Remembrance of Things Past: “The only true voyage of discovery would be to behold the universe through the eyes of another … [and] the hundred universes that each of them beholds.”

Indeed, Zuo’s core theme — serendipitously interpreted as a visual pun in English — consists of recurring eyes/I’s, a multitude of perspectives and selves. The enormous goggles worn by the girl who boards the night bus are replicated by the bespectacled eyes of a grandmother, then shape-shifted into the startled orbs of a giant carp; the traveling girl, the old woman, and the giant carp are one and the same. Fish and silkworms — symbols of transformation — dominate Zuo’s narrative. For human characters, gender and age are also fluid.

By scrutinizing the world through ‘the eyes of another,’ Zuo … explores the porous and surreal boundary between fiction and autobiography, familiar and otherness, human and animal, untamed nature and rampant development.


By scrutinizing the world through “the eyes of another,” Zuo explores the porous and surreal boundary between fiction and autobiography, familiar and otherness, human and animal, untamed nature and rampant development. Alzheimer’s turns a beloved grandmother into a fishlike alien (“Night Bus”); a misunderstood artist sees himself as a stray cat in danger of being drowned (“Cat Boy”); a large trout, captured by electrofishing, is ignominiously discarded when its intestinal tract somehow reveals undigested traces of its captors’ recent lunch (“Iwana Bouzu”); a scuttling horned beetle reminds a boy of his bullied classmate (“The Beetle and the Girl”); tangerine peels found at the site of a bulldozed orchard resemble smiling baby faces, while a nearby bridge is constructed from tombstones with names of the dead still visible (“A Walk”).

The collection’s longest work — its eponymous “Night Bus” — begins with Zuo as an artist recreating the voyage of his grandmother’s regression, with concentric detours in which Zuo and his younger brother show up as boy scouts and her travel companions. The grandmother, seen first in color panels, then in black and white dream sequences, appears as a young girl instructed by a passerby to skip the “senior bus” and hop on the steampunk night bus instead. Despite the trip’s wistful lyricism, Zuo does not shy away from the terrifying aspects of his grandmother’s dementia that gradually colonize the story. Her transformation into a menacing blob, then a giant carp, and her twilight entry into “the cocoon house” — all reflect Zuo’s fear and anguish — which then morph into the fear of his own animal nature, symbolized by a silkworm-radish monster growing into a gargantuan ecosystem.

Greater than these fears, however, is the artist’s anxiety that relentless modernization will obliterate vital — if at times grotesque — elements of the physical world. Thus, as a balancing force, the animals in Zuo’s comic universe have ways of resisting human rapaciousness. In “Walking Alone,” a mythical golden pig that lives underground manages to siphon all the water from a kitchen reservoir; later a crab severs one of its legs to escape from its captor. In “Iwana Bouzu,” a magic fish, in the guise of a little girl, chastises a fisherman for harming wild life with his electrofishing.

Zuo’s unease represents a form of mourning for his own past as well as China’s rural past. By using the comic medium to resurrect his grandmother’s memory and his childhood’s bucolic landscape, Zuo also acknowledges his conflicted self as both artist and materialist, peasant and city-dweller, nature lover and callous hunter.

The author’s ambivalence extends to seemingly positive changes, as in “People in the Park,” where a former trash-strewn forest becomes a safe park that attracts outdoors concert-goers, seniors, families, and students; or in “A Story of Fireworks,” where the tradition of setting off firecrackers during the Lunar New Year gets banned by the government due to air pollution. A character remarks that an urban amusement park reminds her of cowed nature, with “all fake landscapes and tiger statues.” Still, the lack of fireworks, while dampening the festive spirit of a major holiday, “didn’t take long for people to adjust” to.

While subtle, Zuo’s graphic tales may still be subject to censorship at any given moment. Folktales, fables and fantasy were genres typically depicted by “linked picture books” — or lianhuanhua, an old-fashioned Chinese term for comics — suppressed during the Cultural Revolution on grounds of superstition, feudalism, and revisionism. The future — while devoid of blatant ideology — can nevertheless become more ominous in its cocooning effects, burying people in technological convenience to distract them from the mystery tour bus that snakes its way toward knowledge.

Thúy Đinh is coeditor of Da Màu and editor-at-large at Asymptote Journal. Her work can be found at thuydinhwriter.com. She tweets @ThuyTBDinh.