Return to learn: How the pandemic is changing Colorado education policy 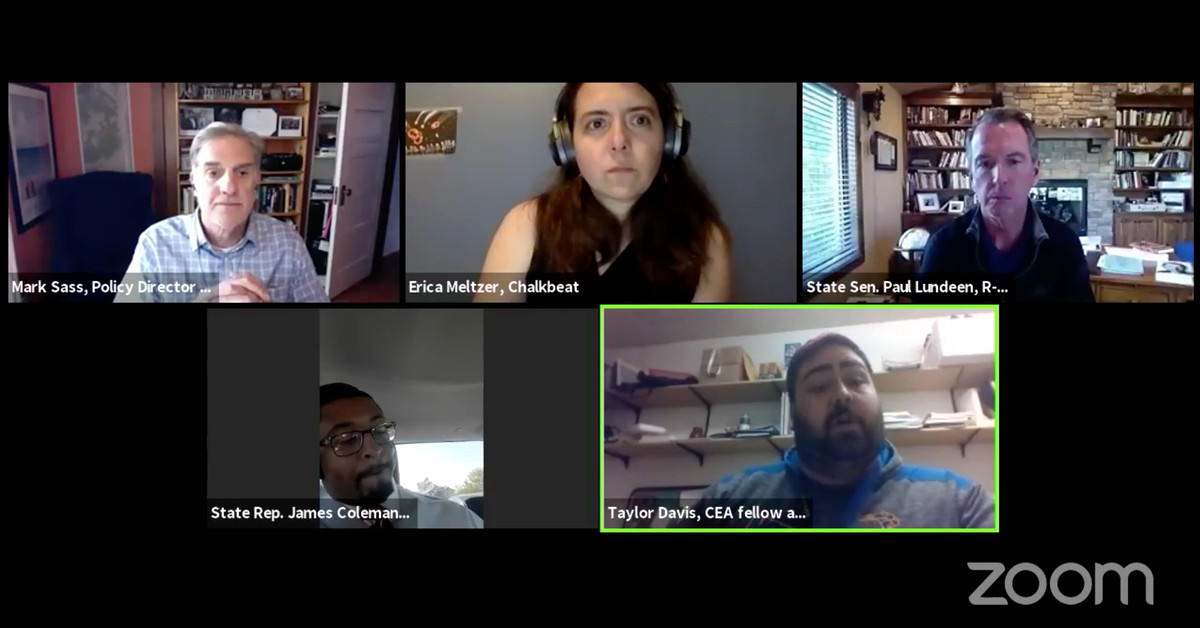 The coronavirus pandemic heightened existing inequities in Colorado schools, worsening the challenges educators and lawmakers have dealt with for years.

That’s the perspective repeated by teachers and policymakers during a Thursday panel hosted by Chalkbeat Colorado on where statewide education policy stands during COVID-19. The four panelists broached topics that include funding, equity issues, how to test and support students, and the racial justice movement across the country.

The panelists said that while the pandemic created new and unexpected scenarios, the underlying issue of how best to ensure individual student needs are met remains.

“For me, it just continues to be the same issues before that we’re seeing now,” said state Rep. James Coleman, a Denver Democrat.

During the hourlong conversation cosponsored by the University of Denver Morgridge College of Education, the panelists shared their experiences in schools and in crafting policy to meet problems that the coronavirus has created. They also shared a preview of what is to come for Colorado.

In Colorado, state Sen. Paul Lundeen, a Monument Republican, said K-12 education is a $13 billion investment, when all sources are considered, and it’s imperative lawmakers find ways to ensure teachers and students have what they need to teach and learn.

The virus, however, has placed significant strains on the state budget, both through reduced revenue and new needs to respond to the pandemic, he said. When lawmakers convene next year, they will look at ways to ensure K-12 gets the money it needs, he said.

“We’re going to have to figure out a way to carve off money to support and resource things differently,” Lundeen said.

Lundeen said he envisions providing resources to parents so they can choose how best to meet the needs of their students.

Coleman suggested the system consider that many low-income families lack expertise and resources to make decisions about education. He plans to review state spending for programs that don’t work for Coloradoans. For too long, he said, lawmakers have blamed revenue shortages on restrictions in how the state collects and spends money.

Coleman said that instead, Republicans and Democrats must find consensus.

“We’re going to find ways to work together because that’s what we have to do,” he said.

For instance, a lack of reliable internet access in rural communities becomes an acute issue when students are required to be home to learn, said Taylor Davis, a North Park School District music teacher. He lives in Jackson County in rural north central Colorado.

Davis said he’s spent time creating paper packets for students to use at home. He said under the pandemic, teachers still must meet students where they are so they can be successful.

“You can’t fault them for not being in a place where they can afford to have internet access,” Davis said.

Sass also said students need social and emotional support during this tumultuous time. The pandemic brought increased awareness to the reality that many students in poverty already suffer from trauma and struggle to learn. Sass said teachers also need support to ensure students now and in the future can be supported mentally and emotionally.

And while Sass said some teachers might not hold this view, he believes schools should conduct state tests this year. However, he said policymakers must outline how those tests will be used, whether for punitive measures against low-achieving schools, or dissemination of resources for needy schools.

“I think it’s important for us as a system to know where we are with how we’re doing with educating our kids, where are the gaps,” Sass said. “It’s a civil rights issue in my mind.”

The national movement to protest racial injustice, Sass and Davis said, has affected and inspired their students.

As a history teacher, Sass said he’s tried to make connections to the U.S. legacy of racism and civil rights. While face-to-face conversations work better in approaching the issues, Sass said, the pandemic shouldn’t stop important and sometimes difficult conversations about racial justice.

Davis added that he’s also addressed the topic with students and sought out diverse authors and music. Davis grew up in Alabama and he said he’s tried to bring his background and experiences into the classroom.

“My main thing is trying to show them that there are other people that have been successful that might not be the same color as me,” he said.

And in terms of policy, Sass suggested a greater push for teacher training programs to recruit more diverse candidates, which schools lack. Sass said he is concerned the pandemic will put more teachers of color at risk of losing their jobs due to budget cuts.