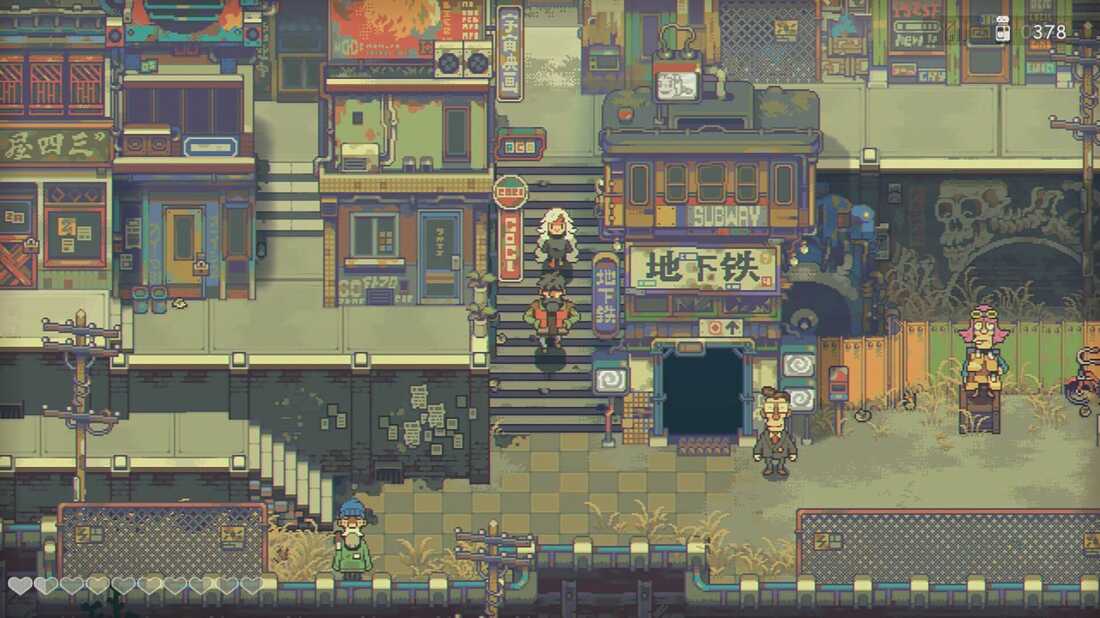 An unlikely pair of adventurers fight their way through a mysteriously crumbling world in Eastward. Pixpil hide caption 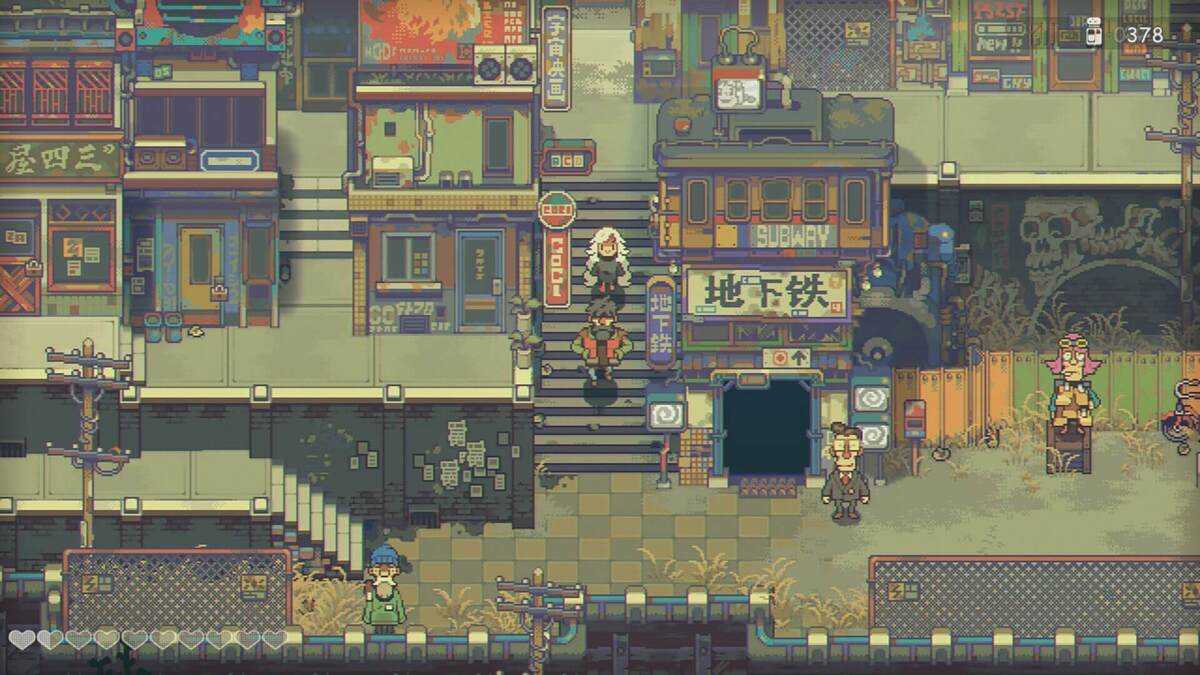 An unlikely pair of adventurers fight their way through a mysteriously crumbling world in Eastward.

The most nimble game developers borrow. Like Shakespeare himself, they rummage through venerated titles crafted by the old guard and snag anything useful to them. They ask themselves “How can we create a game as inventive as Fallout, as artistic as Zelda and as gripping as The Last of Us?”

Shanghai developer Pixpil’s newest title, Eastward, is a triumph that stretches the standard for indie game development; it masterfully combines popular tropes from older titles and genres without feeling hackneyed and stale. It’s no easy feat, but Eastward passes the test with flying colors (and pixels).

Eastward follows two main (and very lovable) protagonists, John and Sam, who, unlike their names, are quite unique: John is a laconic, blue collar digger who sports a flannel and wields his trusty frying pan as a weapon. Sam is a rambunctious young girl with bright white hair and supernatural abilities. Together they form not only a formidable fighting duo, but a father-daughter-like relationship (they’re not actually related) that tugs at your heartstrings at several moments during your playthrough. They are a beautiful pair, and when they’re not taking down monsters, the adorable Sam is usually inhaling something delicious John cooked on his handy frying pan.

As mysteries unfurl in Eastward, it becomes clearer that Sam and John’s world is deteriorating. There are hints of a population in decline as a deadly miasma engulfs forests, towns, and distant cities. Although the game does include classic video game apocalypse imagery — burnt down homes, looted shops and crumbled bridges — Eastward does a better job than most titles at teasing out information about disasters to come. I felt tense during my playthrough; the plot-related dialogue shrouds itself in enough mystery to keep players guessing about the oncoming calamity.

Eastward expertly toes the line between lovable and genuinely dark. Though the game does have too many cutscenes, the more significant ones play out like an off-Broadway drama; there’s tension, pain, and loss. It’s especially jarring when that darkness appears in pixelated form. As characters discover hard truths, profess feelings or show compassion, you can see it on their faces: Pixpil proves that you don’t need high-resolution graphics to convey sincere emotion.

Pixpil’s tiny team managed to pack incredible detail into each part of Eastward‘s map without sacrificing quality in other aspects like writing or character development. Each pixel blasts color through the Switch’s limited screen. It’s like each individual dot was crafted with the utmost care. As John and Sam traverse dark dungeons or New Dam City’s bright, Japan-like streets, I felt as though I was part of their story. What interesting shops awaited us around the next corner? What monsters were going to try to rip me apart while I bashed them with my frying pan? 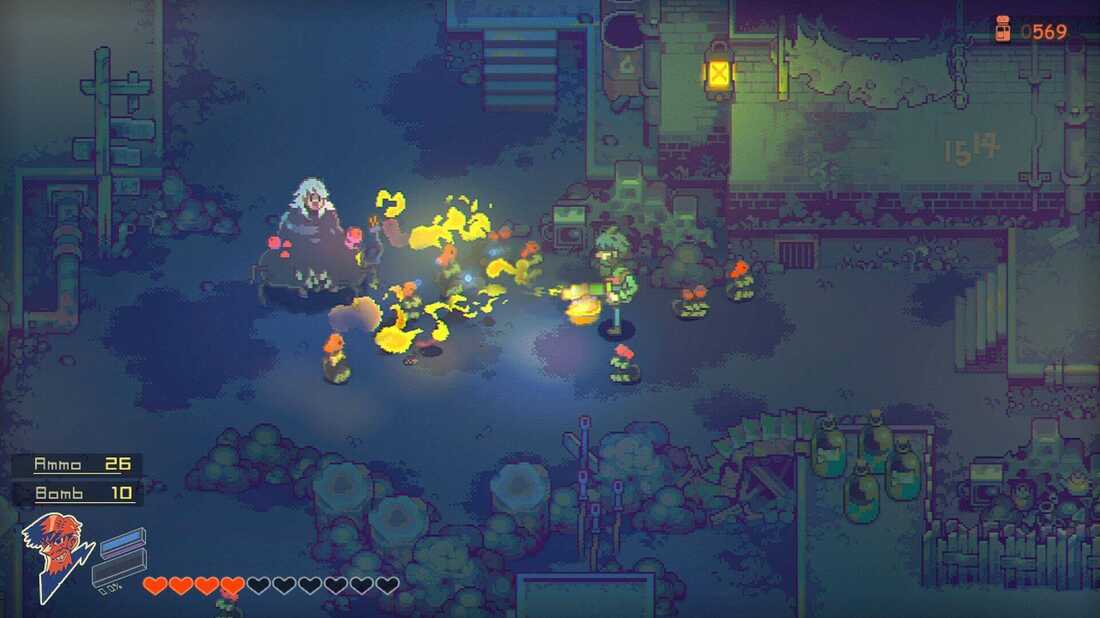 Fight off enemies with kinetic blasts — or your trusty frying pan (which is great for cooking up dinner, too). Pixpil hide caption 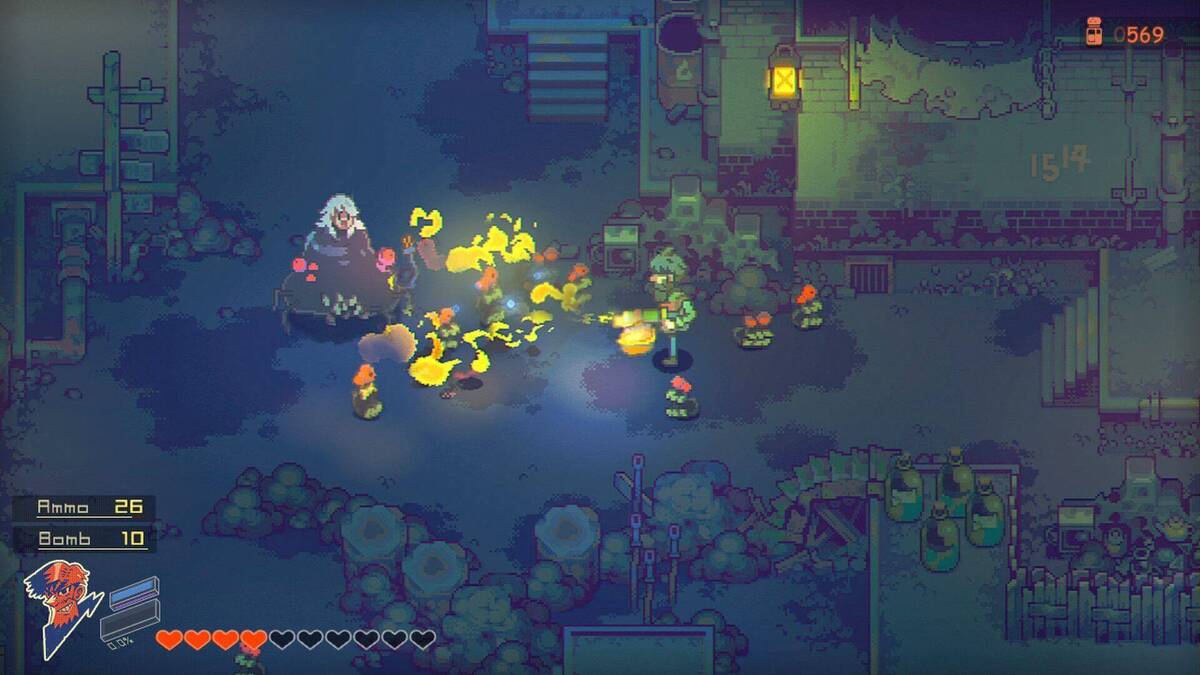 Fight off enemies with kinetic blasts — or your trusty frying pan (which is great for cooking up dinner, too).

It’s clear that Pixpil devoted tons of time and effort to creating something visually appealing. When I think back to the handheld Zelda games like The Minish Cap or even the recent Link’s Awakening remake, I realize that Eastward went above and beyond Nintendo’s artistic prowess. This isn’t to say that these famous Zelda titles aren’t impressive — they are, but Eastward‘s team managed to capture my sense of adventure even more than those titles. Each character sprite has distinctive traits, like a woolly beard or purple hair, each building embraces the woe of an impoverished city, ads plastered across cement and air conditioners shoved into windows. Somehow, Eastward‘s visuals make me want to ditch my D.C. apartment and travel to these seedy cities, even when they’re on the brink of downfall.

Embedded in this visual gem is a sound design masterclass. Dialogue bubbles blip and chirp playfully, John’s frying pan whap-whap-whaps at electrified slugs. Even Sam’s muted footsteps in a quiet room are designed with care. The sounds are physical and add another thoughtful dimension to Eastward.

It took me a few hours with Eastward to appreciate its music. I didn’t love the repetitive synthy tunes at first because they sounded a little lazy, but over time some of the more hidden elements of the game’s music jumped out at me, like a piano backing I hadn’t noticed or a guitar lick I enjoyed. The transitions between cutscenes often meant cutting off one tune and beginning another; just as I was starting to enjoy one track, a cutscene or change of location interrupted it. I did expect more musical flair and originality from a game that oozes quality elsewhere, but it satisfied me enough.

It’s games like Eastward that remind me that it’s okay to let the PS5 sit idle next to the TV. Nowadays it is so tempting to devote all my gaming to a badass new console, but indie diamonds like this one prove how much story can be told with so little processing power. It renews my confidence in originality in gaming when a team like Pixpil can produce something on par with the big money behind major studios. Nintendo, Sony and Microsoft should make note of games like Eastward — they’ll have plenty of ingenuity to borrow.

Keller Gordon is a columnist for Join The Game. Find him on Twitter: @kelbot_