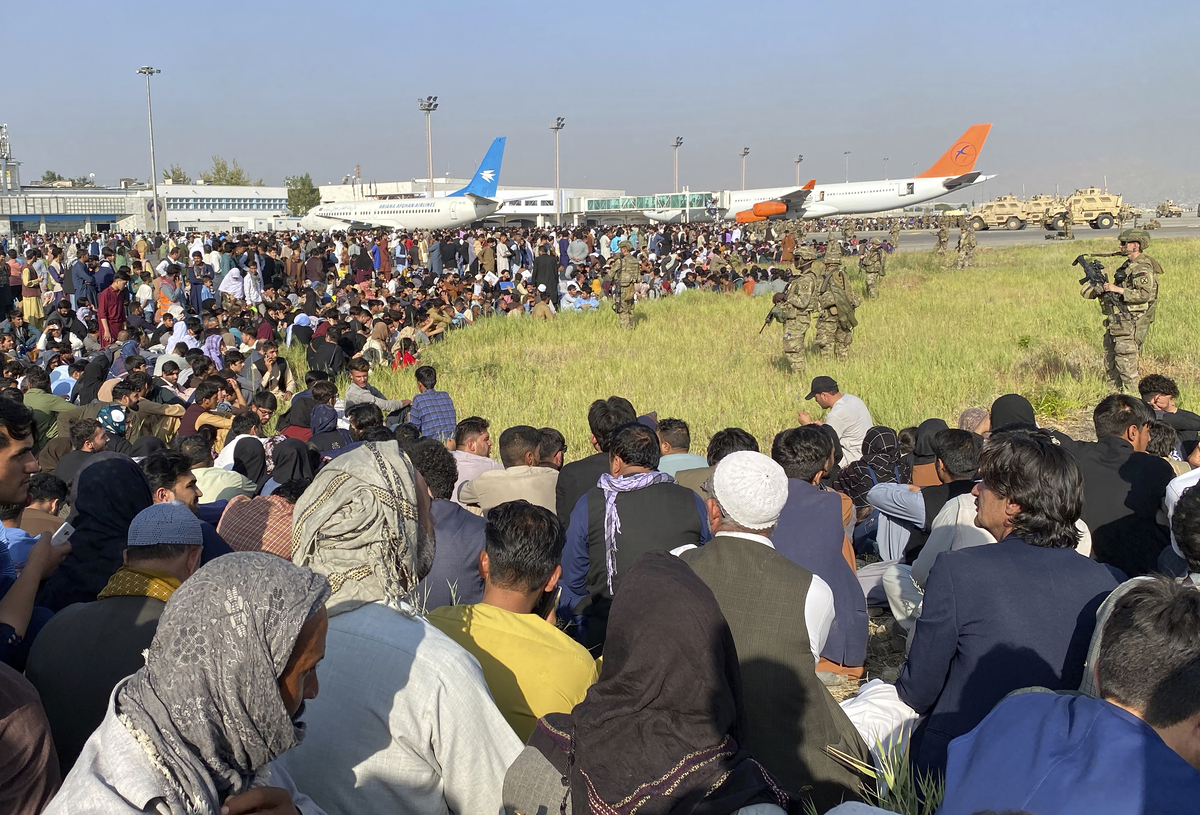 U.S. soldiers stand guard along the perimeter at the international airport in Kabul Aug. 16, 2021.

Looking at the newscast images this week of Afghans desperate to flee the Taliban, I’ve been struck again and again by the feeling that the horrors I’m watching in real time are somehow familiar.

A throwaway line in a newspaper article cued me as to why. In a report on Biden administration figures who had urged caution in drawing down U.S. forces, Secretary of Defense Lloyd Austin III, was quoted as having told the President, “we’ve seen this movie before.”

And in several senses, that’s exactly right. Reasonable people may disagree about which movie, but we have all seen it. The recently confirmed Secretary of Defense clearly meant the phrase in a metaphorical sense, but America’s military adventures have been chronicled extensively enough that there’s some truth to the assertion even as fact.

The haunted gaze of children who’d known only war

Documentaries from the black-site interrogation expose Taxi to the Dark Side, to Restrepo, which chronicled the tragic human cost of securing an Afghan valley that would be given-up just months after U.S. soldiers left, had offered glimpses of everyday life in the country. Wary villagers, the haunted gaze of children who’d only known war, battle-scarred buildings — all so commonplace as to seem almost unremarkable. 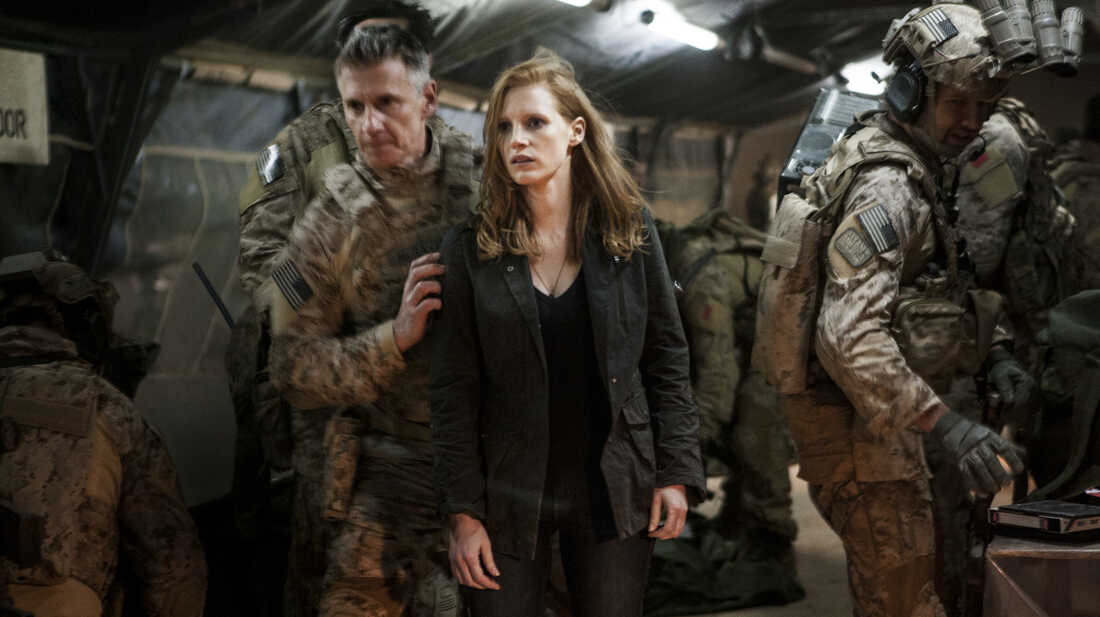 Stationed at a covert base overseas, Maya (Jessica Chastain) is a member of the elite team of spies and military operatives (Christopher Stanley, left, and Alex Corbet Burcher, right) who devote themselves to finding Osama bin Laden in Zero Dark Thirty. Jonathan Olley/Sony Pictures hide caption

In Zero Dark Thirty, when Kathryn Bigelow recreated the mission that struck across the Afghan border into Pakistan to take out Osama Bin Laden, her portrait of the society in which the Americans were operating felt as authentic as news footage, and flash-edited and scored with a pounding soundtrack, arguably packed more punch.

‘A place of warring tribes’

This sort of verisimilitude is a relatively recent development, but it augments an already pervasive and unflattering portrait of the region. For roughly half a century Hollywood has used Afghans as background figures for fictional stories in which outsiders consistently underestimate their grit and determination. Afghanistan is “a place of warring tribes,” as Michael Caine’s con-man put it in The Man Who Would Be King, “which is to say a land of opportunity for such as we.”

That 1975 John Huston epic was based on a story Rudyard Kipling had written in 1888, between unsuccessful second and third(!) Anglo-Afghan wars. In telling the story of two rogue ex-soldiers (Caine, and Sean Connery) who hope to exploit what they perceive as the ignorance of the locals, it mocks the racism, misjudgments and false premises that gave Britain’s empire-building in the region such a shaky foundation.

The bounders played by Caine and Connery are undeterred even when told by Christopher Plummer’s Kipling (the film gives a name to the story’s unidentifed narrator) that no outsider has survived there “since Alexander the Great, King of Greece about 300 years before Christ.” Their response is dismissive. “If a Greek can do it, we can do it.” Their story didn’t end any better than it did for the Brits.

The Soviet attempt at nation-building also ended badly — so badly that it became a Hollywood plot point even at a time when most of the world wasn’t paying attention.

James Bond, John Rambo, and the graveyard of empires

In 1987, The Living Daylights spent much of its running time shuttling Timothy Dalton’s 007 between Russia and Afghanistan to disrupt a deal between the Soviet military, opium-growing mujahideen and arms dealers.

And a year later, Hollywood’s most famous mercenary reluctantly paid a visit to the country in Rambo III. He was on a mission to rescue his pal, Col. Sam Trautman (Richard Crenna), who was being held in a Soviet camp high in the Afghan mountains mostly so he could spout exposition about Afghanistan’s reputation as “the graveyard of empires.”

“Every day,” he tells his Soviet captors, “your war machines lose ground to a bunch of poorly armed, poorly equipped freedom fighters. If you’d studied your history, you’d know that these people have never given up to anyone. They’d rather die than be slaves to an invading army. You can’t defeat a people like that. We tried. We already had our Vietnam.”

Sylvester Stallone then set in motion a routing of the Soviet Army that would require eight more years of pitched battles by mujahideen that Rambo III‘s end crawl termed “the gallant Afghan people.”

A decade and a half later, well after the Taliban’s first takeover and al-Qaida’s Sept. 11 attacks, Afghanistan was finally treated more seriously by filmmakers, including by Afghan director Siddiq Barmak. He used what was reported to be the only 35mm camera in all of Afghanistan to tell the story of a 12-year-old girl who, under Taliban rule must pretend to be a boy to support her widowed mother and family. The film was called Osama, the name she took as a boy, and it won the 2003 Golden Globe for Best Foreign Language Film.

It took a few years after Sept. 11 before the makers of commercial American movies felt comfortable dealing with the country on screen, and even then, they concentrated initially on the miscalculations that got us involved there during the Soviet era. Mike Nichols’ 2007 satire Charlie Wilson’s War arched an eyebrow and enlisted Tom Hanks, Julia Roberts, and Philip Seymour Hoffman to tell the story of how American intelligence agencies — operating on the mistaken theory that the enemy of our enemy is our friend — made the decision to arm the nation’s so-called “freedom fighters.” A flurry of documentaries then looked at the experience of troops on the ground, of families back home, of Afghan culture disrupted or compromised.

Panic, desperation and echoes of other conflicts

At some point, these tales bleed into ones from other conflicts. The Persian Gulf war as depicted in American Sniper or The Hurt Locker; Somalia’s failed helicopter rescue in Black Hawk Down. 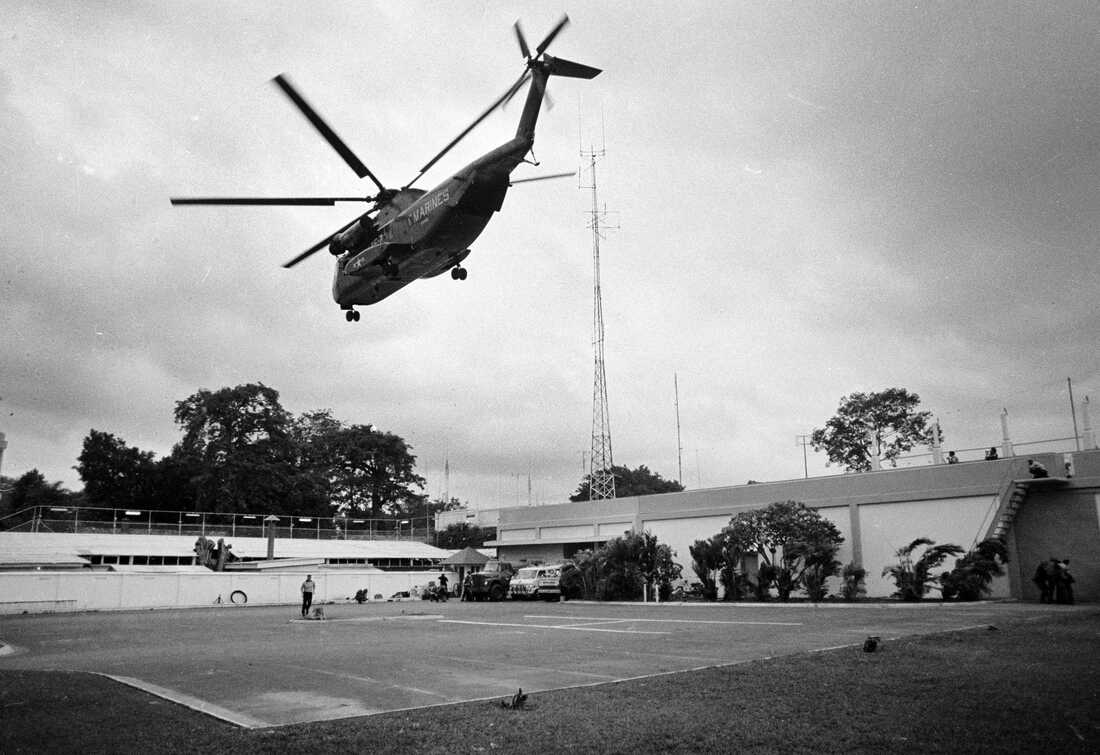 A helicopter lifts off from the U.S. embassy in Saigon, Vietnam on April 29, 1975. AP hide caption

And looming over all of them, the chaotic scene from Vietnam that President Biden was so adamant about not repeating in Kabul: helicopters lifting off the roof of the American embassy in Saigon as U.S. involvement drew to a close in April 1975 — a moment seared into a generation’s memory by news footage as vivid as anything Hollywood could have devised.

Footage from Kabul’s International Airport, of Afghans clinging desperately to the fuselage of a U.S. Air Force C-17 transport plane as it moves down the takeoff runway has that quality, too.

Panic, sacrifice, desperation — we have seen it before. Sadly, it wasn’t a movie.