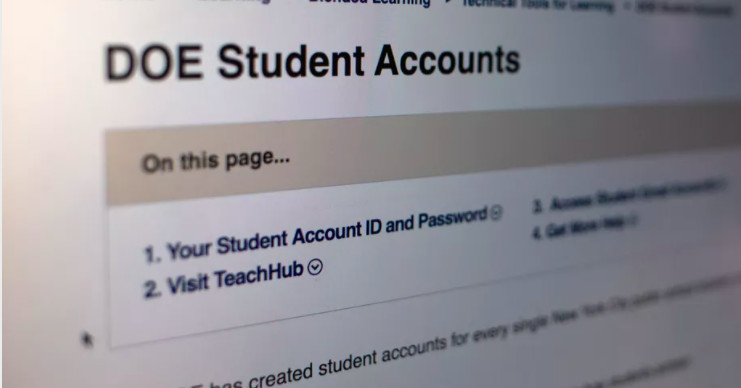 This story was originally published on Oct. 1, 2020 by THE CITY.

The city’s school remote-learning portal should make it easier for nonbinary students to change their designations, pupils and their advocates say.

The Department of Education’s gender change form requires students to list a binary male or female designation. Instead, the DOE should allow “X” as a gender designation, just as the city does for birth certificates, City Comptroller Scott Stringer wrote in a letter this week to Schools Chancellor Richard Caranzza.

“The binary choice of male or female in the DOE’s administrative system is not inclusive and does not affirm or acknowledge the existence and worth of students who identify as neither male nor female,” said Stringer, who recently announced his run for mayor.

He pointed out that students’ birth names are visible to their classmates and teachers in online classes — leaving pupils who want to change their names with no way to do so.

That’s the case for Aerin, a sophomore at Brooklyn Tech High School, who identifies as nonbinary.

“I’m definitely having that issue,” said Aerin, who didn’t want their last name used. “For all the Zoom meetings, I see my dead name. It’s distressing.”

Nonbinary and intersex students face “unique challenges” and “grow up in a world filled with bigotry, homophobia and transphobia,” Stringer said.

The DOE is “addressing the issue” and is in the middle of updating its “systems,” said Reg Calcagno, senior director of government affairs at the LGBT Center, which is working with the department on the issue.

Aerin said they are “theoretically in line” to have their name switched in the online portal soon. Change was easier pre-pandemic because students were able to tell their peers and teachers in person about their new names, Aerin noted.

‘What We are Called Matters’

Calling students by their chosen names is a key step towards making them feel comfortable in class, Calcagno said.

“What we are called matters,” they added. “You want to know that someone knows your name. When someone gets your name right it feels good. When someone calls you what you want to be called it means they are seeing you and you are part of the community.”

The Department of Education is “always working on improving our policies and practices for inclusion and belonging,” said Nathaniel Styer, a schools spokesperson.

The DOE does not include gender on student- and school-facing permanent records such as transcripts and attendance records. The department does not require any documentation to update the gender on a student’s non-permanent records like graduation programs, team rosters and yearbooks.

‘Every student deserves to feel safe, welcomed and affirmed in their public school.’

The Name and Gender Change Request Form is used to update some other permanent records, according to Styer.

The form only includes male or female gender options because certain internal permanent records are used to comply with state and federal reporting requirements, which currently still only provide those binary options, he said.

“Every student deserves to feel safe, welcomed and affirmed in their public school,” Styer added, noting the DOE was the first large district to hire a LGBTQ program manager.

In 2016, the de Blasio administration appointed the school system’s first LGBT community liaison. Activists had lobbied for years for the DOE to create the position, which was first helmed by Jared Fox and is currently held by Eric Vaughan.

Mailbag! Listener Questions and Comments That Got Us Thinking