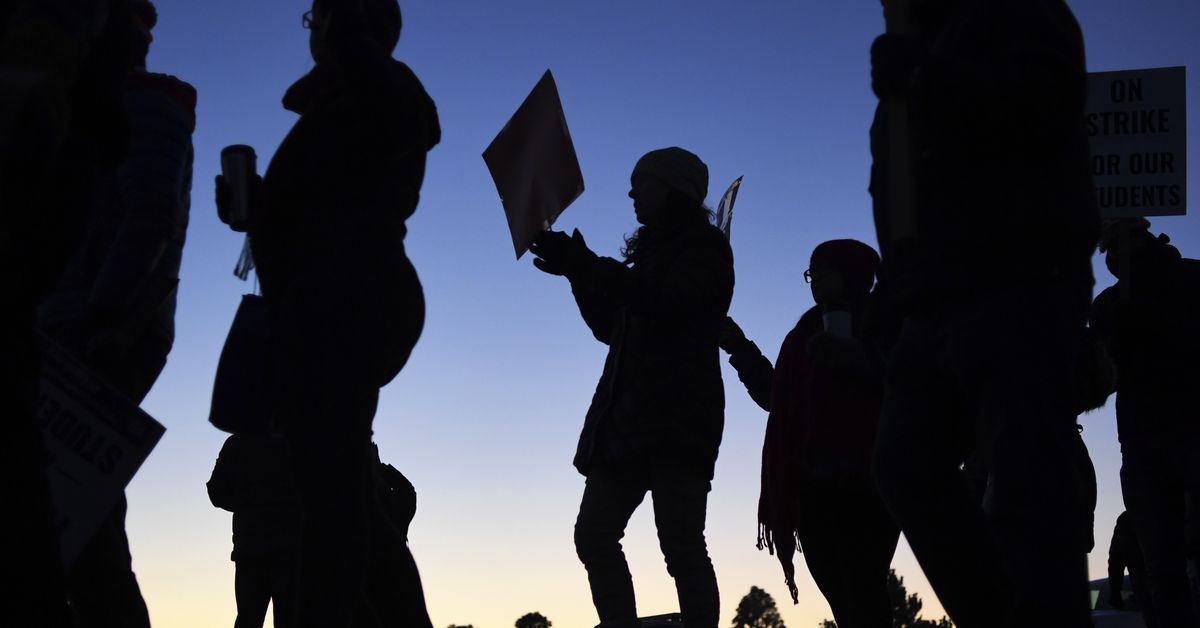 New York City’s teachers union is rapidly laying the groundwork for a strike to halt the reopening of school buildings, following months of threats that educators would take action over coronavirus safety concerns.

The United Federation of Teachers scheduled a meeting of school-based delegates for Tuesday after suggesting they could vote this week to approve what would be a historic work action, according to emails union representatives sent to members this weekend.

Before Tuesday’s possible vote from the union’s delegate assembly — which includes roughly 3,200 representatives from every public school — the UFT’s executive board is expected to vote Monday to authorize a strike, according to an email sent to Brooklyn chapter leaders Friday night.

“Things are getting real. Based on what is going on, we need to have an emergency Chapter Leader meeting in preparation for a strike,” wrote Brooklyn UFT official Jason Golberg, in the Friday evening email obtained by Chalkbeat.

Accompanying the email is a checklist for school-based union representatives, also known as chapter leaders, to create a strike plan for their own campus. To-do items include identifying strike captains who will assign picket locations in front of building entrances and distribute signs, and creating subcommittees to coordinate social media and communication with members.

The email asks for chapter leaders to submit a strike plan by Monday afternoon.

New York City teachers have not gone on strike for nearly half a century and authorizing one does not mean it will actually happen. Just calling for one, however, ratchets up pressure on Mayor Bill de Blasio to delay the scheduled return to in-person instruction on Sept. 10, something teachers and principals have been loudly demanding. Walking off the job carries big risks, both political and economic, as it would be a violation of state law and could force teachers to forfeit wages and lead to steep penalties for union leaders.

The coronavirus pandemic forced school buildings to close in March, and de Blasio has been forging ahead to reopen with a hybrid schedule. The plan calls for most students to attend in person one to three days a week and to learn from home the rest of the time. But teachers are worried the city has not done enough to ensure buildings will be safe to reopen, and the union has demanded that every school meet a litany of safety requirements and that all teachers and students should be tested for the virus before returning to in-person instruction.

Caren Cleckley, one of the Brooklyn chapter leaders who received Goldberg’s email, said she began reaching out to teachers at her school, Brooklyn Academy of Science and the Environment, as soon as she got the notice.

“I don’t think anybody wants to strike but there are real concerns around safety,” Cleckley, a biology and chemistry teacher, said, emphasizing the union’s demand that all students and staff get tested before showing up for in-person classes. “We think the mayor is rushing.”

Marilyn Ramirez, the chapter leader at High School for Media and Communications in Washington Heights, said she will gauge how her members feel on Monday. Ramirez, a bilingual special education teacher, said she is still deciding how to vote. She said she will support a strike if that’s what the majority wants, but even preparing for one is “distracting from the work that needs to be done,” such as ensuring ventilation systems are in good shape, and she wishes the summer was spent improving remote learning.

“This is a critical week for all of us, and I want to make a decision that is best for the entire school community,” Ramirez said.

The investigative news site The Intercept first reported that the union’s top brass are expected to deliberate Monday on a strike action. Meanwhile, multiple chapter leaders in Manhattan, the Bronx, and Queens said they had received no formal communication about a strike vote.

“We are preparing for any eventuality to make sure schools reopen safely for students, staff and the entire school community,” union spokesman Dick Riley wrote in an email. The resolutions that will be voted on Monday and Tuesday have not yet been finalized, Riley said, though he noted the procedure for striking typically involves authorizing the union’s leadership to make the final call.

While preparations appear to be moving quickly, the city could still be some time away from an actual strike — if one happens at all. Union President Michael Mulgrew has repeatedly said the UFT would head to court to stop a return to buildings, before calling a walkout.

He has not said what the basis of such a suit would be, but this week a judge in Florida sided with the state teachers union there, which sued to prevent educators from reporting to school buildings. The decision has been appealed and is expected to be tied up in the legal system for months.

Still, the mere threat of a work stoppage in other cities, including in Chicago, appears to have forced officials to scrap their plans for in-person instruction.

A teachers strike here would be historic — there hasn’t been one in New York City since 1975. It would also likely be illegal under the state’s Taylor Law, which forces penalties on public sector union employees who participate in work stoppages. The union could lose its ability to automatically collect dues, teachers could miss out on paychecks, and union leadership could even face jail time under the law.

All of that makes it unclear how an authorization vote would unfold in a union with almost 80,000 teachers, and thousands of other staff members including teachers aides, social workers, nurses, speech therapists, and others.

Will Ehrenfeld, the chapter leader at Pathways in Technology Early College High School in Brooklyn, said his understanding is that the votes next week would give the union’s leadership the ability to call a strike.

But Ehrenfeld, who teaches history, said union leaders have not been clear about what the votes next week would authorize and there are some serious concerns among teachers at his school that a strike in violation of state law could mean lost wages or healthcare coverage. And while he does not believe schools are safe enough to reopen, he’s also unclear on what the union’s exact demands would be in the event of a strike.

“The communication from the union has not been particularly clear and that’s a concern,” he said. “I’m definitely still taking feedback from the membership of my school. I’m leaning toward [voting] yes, but I’m still wrestling with it.”

In many ways, the standoff between de Blasio and the union has echoes of March, when the coronavirus crisis first exploded in New York City. As the mayor fought calls to shutter campuses, Mulgrew also threatened legal action immediately before classrooms shut down this spring, and teachers were organizing their own sickout. Ultimately, neither happened because, facing escalating pressure, the mayor abruptly closed schools.

Bill Neidhardt, a de Blasio spokesperson, said: “We continue to have discussions with UFT. They have the right to call meetings as they see fit and we respect that.”

De Blasio has been similarly insistent on reopening this fall for in-person instruction, arguing that keeping schools closed will be disastrous for learning and for low-income parents who rely on schools for social services and so they can work.

But a fiscal crisis looms that only adds to the monumental task of restarting a school system with 1.1 million children. The education department’s budget has already been slashed by more than $700 million. On top of that, the state has begun to temporarily withhold 20% of payments to school districts, cuts which Gov. Andrew Cuomo has warned could become permanent.

At a marathon public meeting earlier this month that stretched past 3 a.m., schools Chancellor Richard Carranza admitted that, without an injection of cash, students would have to return to remote-only learning. Such a cut would result in 9,000 teacher layoffs, he said.

“This is not smoke and mirrors; this is, if we get a 20% cut, we will not be able to open up our schools for in-person learning,” he said.

Facing a $9 billion deficit, de Blasio is hoping against all indications to win borrowing authority to keep the city running, or for federal relief. Without that, the city will begin sending notices Monday of layoffs to an estimated 22,000 employees across all city agencies because workers are entitled to a 30-day warning. Citing ongoing labor negotiations, city officials have refused to say how many education department jobs could be impacted — a matter that is separate from the projected teacher layoffs from permanent state funding cuts.

Hundreds of principals and their union have called for delay to in-person learning, arguing there is just not enough time to get ready before school is set to begin.

Reema Amin contributed to this report.

Race Underneath The Skin