NYC teachers, still waiting for ventilation reports, get ready to head back to classrooms 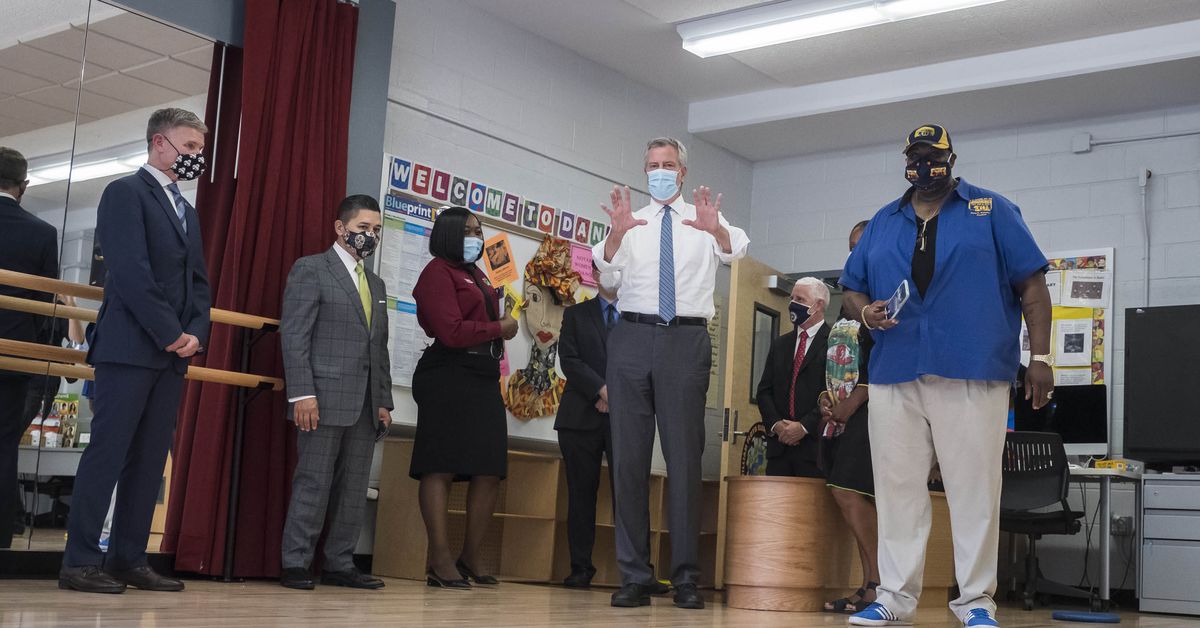 Facing mounting concerns about whether the air circulation in school buildings is enough to help curb the spread of COVID-19, Mayor Bill de Blasio and schools Chancellor Richard Carranza promised to tackle an enormous task this summer. The ventilation in every one of the city’s 56,000 classrooms would be inspected, with the results posted publicly by Sept. 4, they said.

On Friday, a spokesperson for City Hall said that deadline would not be met, potentially setting up teachers to return to their campuses with little information about whether the air is safe.

“We’ve completed the last of our inspections, and will be sharing a comprehensive report next week,” spokesperson Avery Cohen wrote in an email. “Classrooms in need of improved ventilation will be brought offline once in-person learning begins and will remain offline until these repairs are completed.”

Cohen did not specify whether the reports would be out by Tuesday, when teachers are expected to report back to schools to begin preparations for the new year.

“I feel very anxious and worried because I’m not sure how safe it’s going to be when I go back,” said Meg Jones, a pre-K teacher in Harlem. “At this point, I just want information. That’s my bottom line.”

In-person instruction will start 11 days later than originally planned, after educators demanded more time to ensure that schools are safe and the union threatened a strike. Since buildings were shuttered citywide in March, it has become more clear that the coronavirus can linger in the air, making ventilation systems one of the first lines of defense in curbing the pandemic.

That mounting scientific evidence has set off alarms for some educators and parents who have long complained about poor ventilation in schools and windows that cannot be opened to let in fresh air. They are especially worried about children who might not be able to keep masks on all day, and the requirement that students eat in their classrooms.

Jones, who did not want her school identified, said her room has two barely functioning air conditioners, and windows that open mere inches. She’s hoping to see evidence that work has been done to improve the airflow in her classroom once she returns.

“I wish my windows would open all the way. It would be nice to have an up-to-date air filtration system,” Jones said. “I don’t think I’m asking for too much.”

Officials said they are installing more powerful air filters to help catch the virus, unbolting locked windows, and placing 10,000 portable air filtration units in nurses offices and poorly ventilated spaces. De Blasio and the chancellor also promised to flood schools with more than 100 teams of inspectors who would test the airflow. The results of those inspections were supposed to be released Friday.

The education department and city hall did not respond to multiple requests for comment Thursday and Friday. Carranza said on Sept. 2 that the city would have the inspections completed that very day, and said the delay of the school calendar had bought the city more time to make needed repairs.

“As the Mayor and I have stated, if a school or a classroom doesn’t meet our standards, we won’t use that classroom or that school,” he said. “So, we’ll have more to say about it as soon as we get the final evaluations done by the end of the day today.”

Facing skepticism that the city’s inspections are rigorous enough, the United Federation of Teachers announced it would be sending its own teams into buildings to double-check that ventilation systems are up to par. Teachers said they expected to hear back from the union on Thursday, but they haven’t gotten any word. Officials with the union said the reports will be released to chapter leaders sometime Friday night.

In order to help stop the spread of the coronavirus, experts say that it’s crucial that fresh air is pumped into classrooms, and that stale air is pulled out. The Centers for Disease Control and Prevention recommends using carefully placed fans and air purifiers to help maintain proper circulation. Air should be completely changed out twice an hour, the CDC recommends.

It remains unclear how either the city or the union are determining ventilation is safe before staff and students return to buildings, which has not helped to build trust. Video of inspectors holding up bits of toilet paper clipped to the end of a long pole to check for airflow sparked outrage on social media — even though the method is approved by the CDC.

City Councilman Mark Treyger, who chairs the education committee, said he does not believe the campus where the infamous video was shot — the Martin Luther King, Jr. campus on Manhattan’s Upper West Side — should reopen. He said the toilet paper inspection showed rooms on the campus were not properly ventilated.

“I don’t see any scenario where they can reopen MLK Jr. I just don’t see it,” Treyger said. “The gravity of the issues will not be resolved by Sept. 21 so I am urging [the education department] to relocate the staff and kids.”

Deirdre Tuite, a social studies teacher at the Academy of American Studies, wondered how many windows need to open, and by how much, in order to declare a classroom safe. Then again, there have been ventilation issues in her building for so long that she is not convinced repairs could be made so quickly over this summer. She said that her students in the winter come to class with paper towels to wipe down their desks, because heat trapped in the room builds up as condensation — a sign of poor ventilation.

“It almost smelled like a dirty gym sock in there,” she said of the stale air. “I don’t know that there’s anything that I could see in that report that would make me feel better because I’ve been in that school for 18 years, so I know what it’s like.”

‘I haven’t heard anything’: Newark families brace for the unknown as school starts virtually

Our Homeland Is Each Other

Deja Vu All Over Again