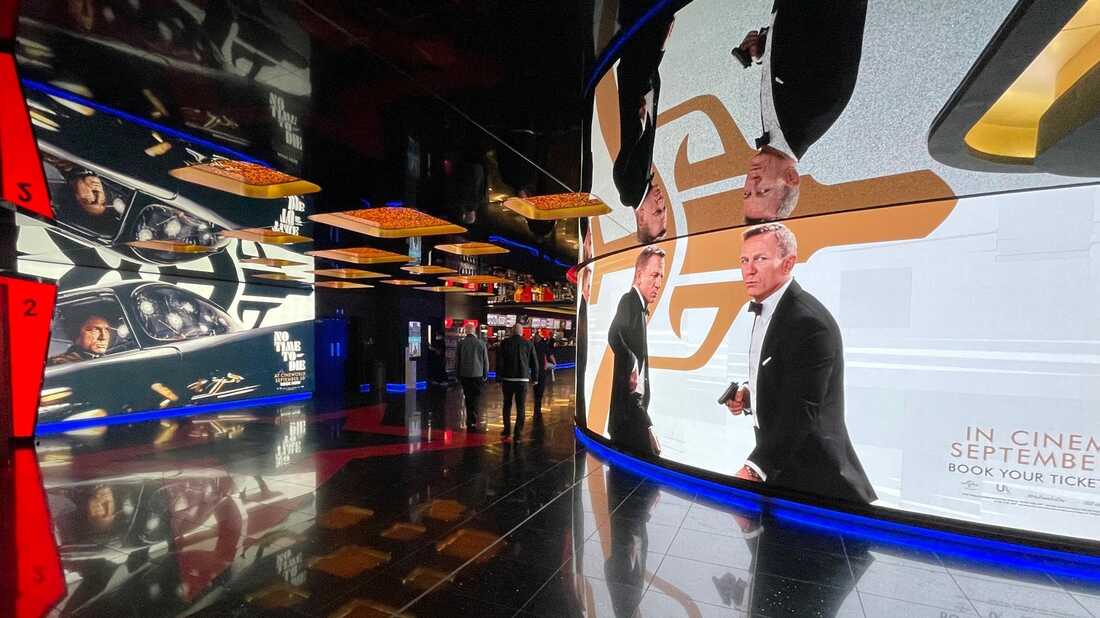 Advertisements in a theater in London’s Leicester Square show Daniel Craig as James Bond in No Time to Die. Ahead of its opening in the U.S. this weekend, the film had taken in more than $120 million in 54 foreign markets. Frank Langfitt/NPR hide caption 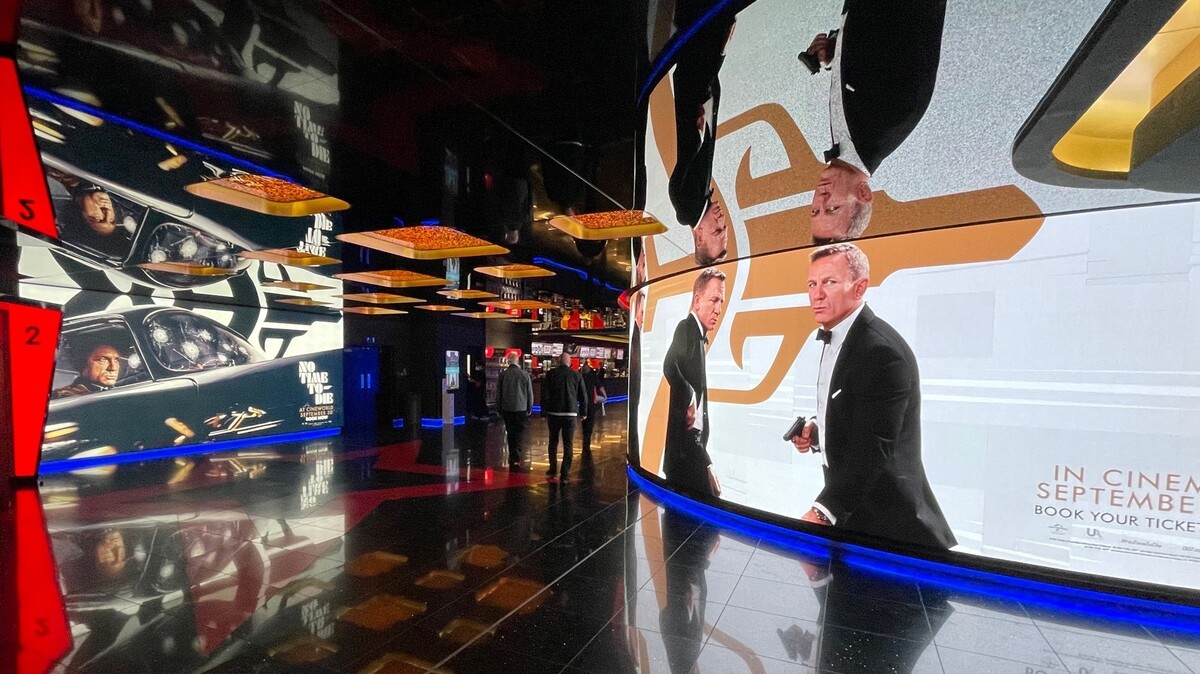 Advertisements in a theater in London’s Leicester Square show Daniel Craig as James Bond in No Time to Die. Ahead of its opening in the U.S. this weekend, the film had taken in more than $120 million in 54 foreign markets.

LONDON — There’s a scene in the new James Bond film, No Time to Die, in which 007 takes a young woman back to his bungalow in Jamaica, thinking that — as in the past — he will effortlessly seduce her. Instead, she removes her wig, and Bond, who’s been retired from MI6 for five years, realizes she’s a British agent.

“The world’s moved on, Commander Bond,” says the agent, Nomi, played by Lashana Lynch, who also starred in Captain Marvel.

Nomi could be addressing the Bond franchise itself. No Time to Die, the 25th film in the series, opened nationwide on Friday. That is six years since the last Bond movie, Spectre, hit the theaters. Since then, a lot has happened, including the pandemic, which delayed the film’s release by about 18 months, and the growth and spread of the #MeToo movement and Black Lives Matter.

The franchise also has a new, very powerful partner in Amazon, which announced plans to buy MGM, Bond’s parent company, for more than $8 billion in May. After a very successful, five-film run as 007, Daniel Craig is retiring from the role.

That leaves the franchise with some big questions: How to make a spy who was created during the Cold War and known for misogyny attractive to a younger, American audience that views women very differently and puts a premium on diversity? Will Bond’s producers, who see themselves as custodians of the 007 legacy, see eye-to-eye with their new financial partner, Amazon?

A lot is at stake. The Bond franchise is Hollywood’s longest-running and among its more lucrative. It’s earned more than $2 billion domestically, not accounting for inflation, which puts it well behind Marvel and Star Wars, but ahead of Jurassic Park and the Fast and the Furious.

Bond is also valuable to corporate brands. No Time to Die has at least 30 product placements, everything from Aston Martin and Land Rover to Chopard diamonds, which one of the characters, a Cuban spy played by Ana de Armas, wears as she kicks, punches and shoots her way through an elegant Havana party.

The relationship with brands is symbiotic. The Bond movies help sell the products, and corporate ads tied to the film help sell the movie, reducing pressure on the studio’s advertising budget.

“It’s tens of millions of dollars of savings when a brand … is helping to utilize their media channels and to direct eyeballs from consumers where the film would not naturally be able to even advertise,” says Stacy Jones, who runs the company Hollywood Branded. “That’s extremely valuable to a studio. It’s a difference of making profits and not making them.”

But that hinges on Bond remaining relevant and building new, younger audiences. As a pastime, Bond has traditionally been passed down by fathers to sons and daughters, but that link has frayed.

“I think it’s getting a little bit done now,” says a reluctant Annie Butcher, 22, referring to the Bond franchise. Butcher was finishing lunch in Leicester Square, a London entertainment hub, where No Time to Die was playing in three separate theaters. She says she will see the movie, but only because her parents are paying.

“I’ve got nothing else to do,” she says. ” So, I’ll go watch it, might as well, free ticket and I want some popcorn.”

Bond also faces pushback from some younger audiences given the way he’s treated women in the past. Consider the poolside scene in 1964’s Goldfinger when Bond, played by Sean Connery, shoos away a young woman so he can speak with CIA agent Felix Leiter.

“Man talk,” he says, before slapping her on the butt.

The character became so outdated, the screenwriters addressed it in 1995’s Goldeneye, where Bond’s boss, M, tells him: “I think you’re a sexist, misogynist dinosaur, a relic of the Cold War.”

But No Time to Die shows how far the franchise has gone to shed that part of the character. The new film has a strong love story, one of the themes is family, and 007 is monogamous. Bond works with two female spies, one Cuban, the other a Black Briton, who are strong, three-dimensional characters, very convincing in action scenes, and they bring a lot of humor to their roles.

“I thought they were so great,” said Eleanor Biggs, 25, who spent her childhood here in England trying to avoid going to Bond movies with her father and brother. Biggs remembers how in so many past films Bond girls were just clothes horses who went to bed with 007 and then either disappeared from the film or were killed off.

“It was great to see female characters with more agency,” Biggs continued, and “see women kind of being an important part of the plot.”

It’s worth remembering the response to Bond is always going to be a bit more positive in Britain than it might be in America, because many Britons see 007 as a national hero. In addition, the Bond franchise is a global one, and what offends some Americans plays better in some other cultures. 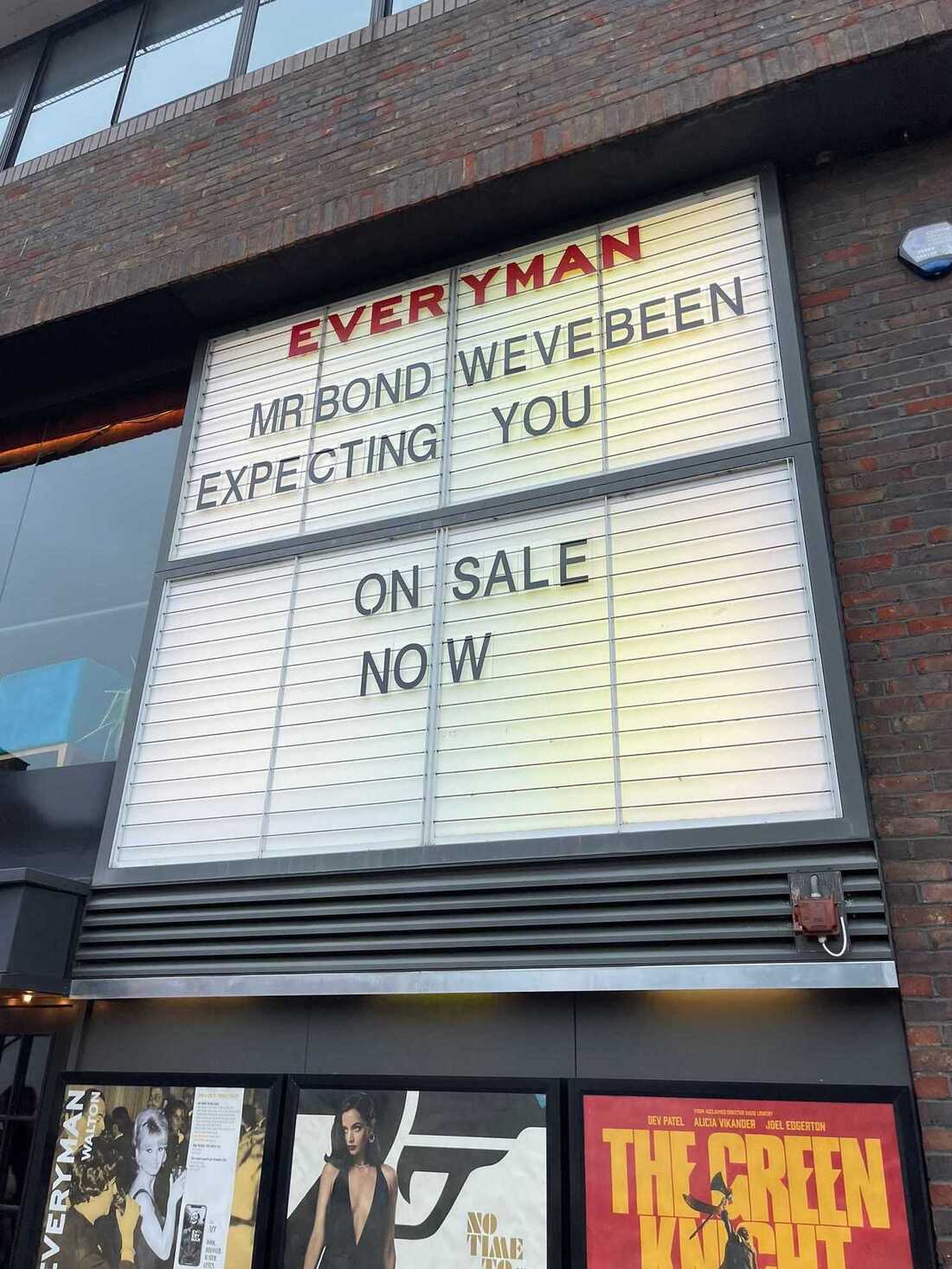 A theater in suburban London welcomes back the world’s most famous secret agent after a six-year hiatus. Frank Langfitt/NPR hide caption 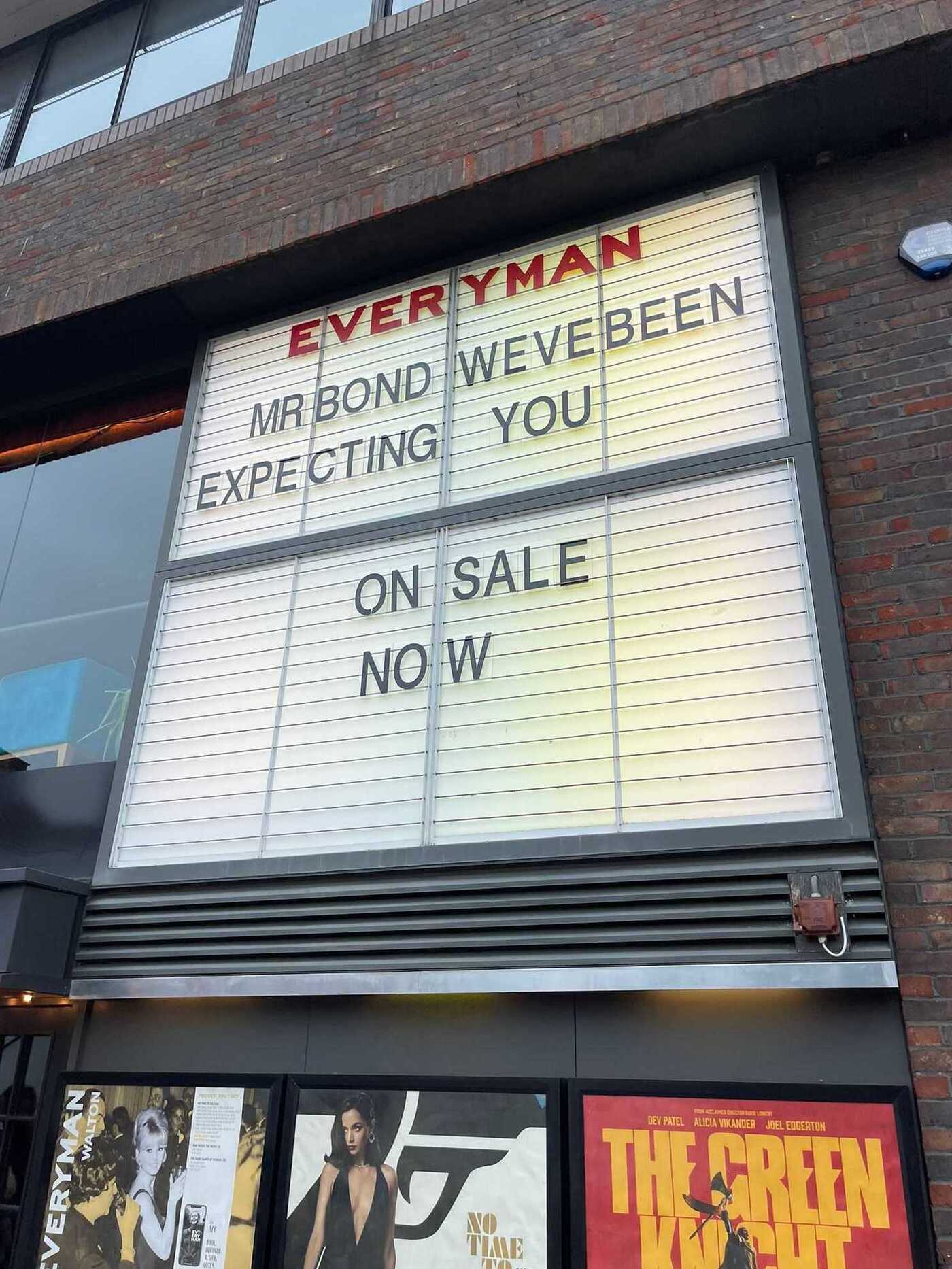 A theater in suburban London welcomes back the world’s most famous secret agent after a six-year hiatus.

With the Bond movies now pushing 60 — Dr. No was released in 1962 when John F. Kennedy was president — analysts say the producers need to think about how to expand the audience. Jones, of Hollywood Branded, points to the evolution of comic book franchises. When she first worked with the producers of X-Men, she says, they were only interested in brands that appealed to males. But, she points out, Marvel has expanded that narrow demographic exponentially.

“They have created such a wide breadth of characters of every color, every sexuality,” Jones says. “Their storylines are strong. They have unbelievable brand partnerships that are able to support the franchise around the world.”

Bond’s new co-owner, Amazon, has said it plans to reimagine and develop the studio’s intellectual property with reboots and spinoffs, which is what Marvel has done with shows such as WandaVision on Disney+, which is also home to the Star Wars series, the The Mandalorian.

Steven Blume, who runs Content Partners, which acquires films, TV shows and their royalties, says Eon Productions, which makes the Bond movies, needs to follow Amazon’s advice to keep up with competition that continues to churn out content.

“You have these amazing, iconic characters, and why not tell their stories and expand this thing into a universe?” says Blume. “It’s ripe for it, and who better to do it than Amazon?”

For instance, Blume says, why not build a TV series or movie around Q, the MI6 Quartermaster who designs Bond’s cars and gadgets?

“You tell the back story of Q and how he met Bond and their relationship,” says Blume. “You make Bond the secondary character. People would love that!”

Perhaps, but the Bond producers — Barbara Broccoli and her half-brother Michael Wilson — might hate it. Bond is a family business that has creative control — a rarity in Hollywood — and they’re keeping it under the Amazon deal. The producers have resisted spinoffs in the past, but Blume says sticking with the old game plan could be fatal.

“As far as I’m concerned, they should come into this century and really enhance the brand as opposed to letting it die,” says Blume.

The producers will have to make one crucial decision soon: choose someone new to play 007. Jones of Hollywood Branded thinks they should look for a man of color to stay relevant, but she says a female bond is probably a bridge too far.

“That’s going to be harder,” she says. “I think that you have such a male demographic built in. … You will cut off your audience at the knees.”

As for No Time to Die, it’s off to a strong start. Reviews have been mostly positive, with critics giving it an 84 percent score and audiences an 89 percent score on Rotten Tomatoes. As of last weekend, the film took in about $120 million in 54 foreign markets. In limited previews in the U.S. on Thursday, it earned $6.3 million, well ahead of the last two installments, Spectre and Skyfall.

Analysts will be watching this weekend’s haul in America closely. The film opens in China, the world’s largest movie market, on Oct. 22.