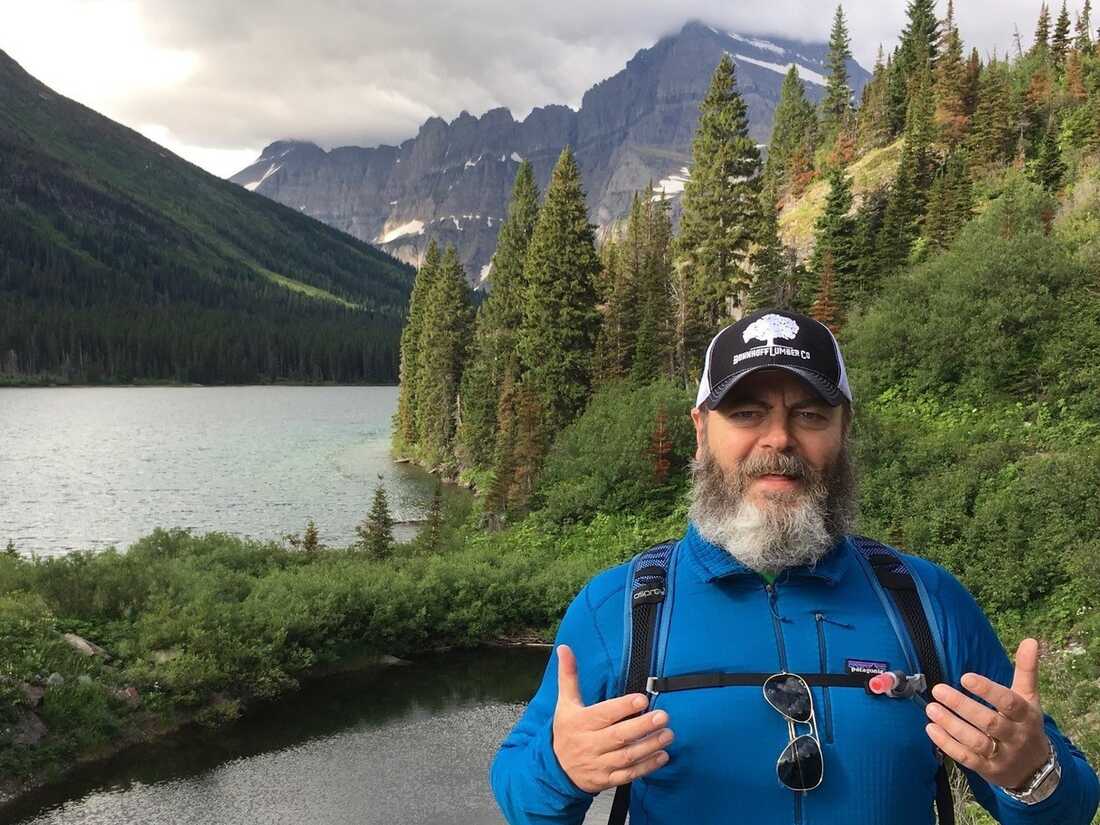 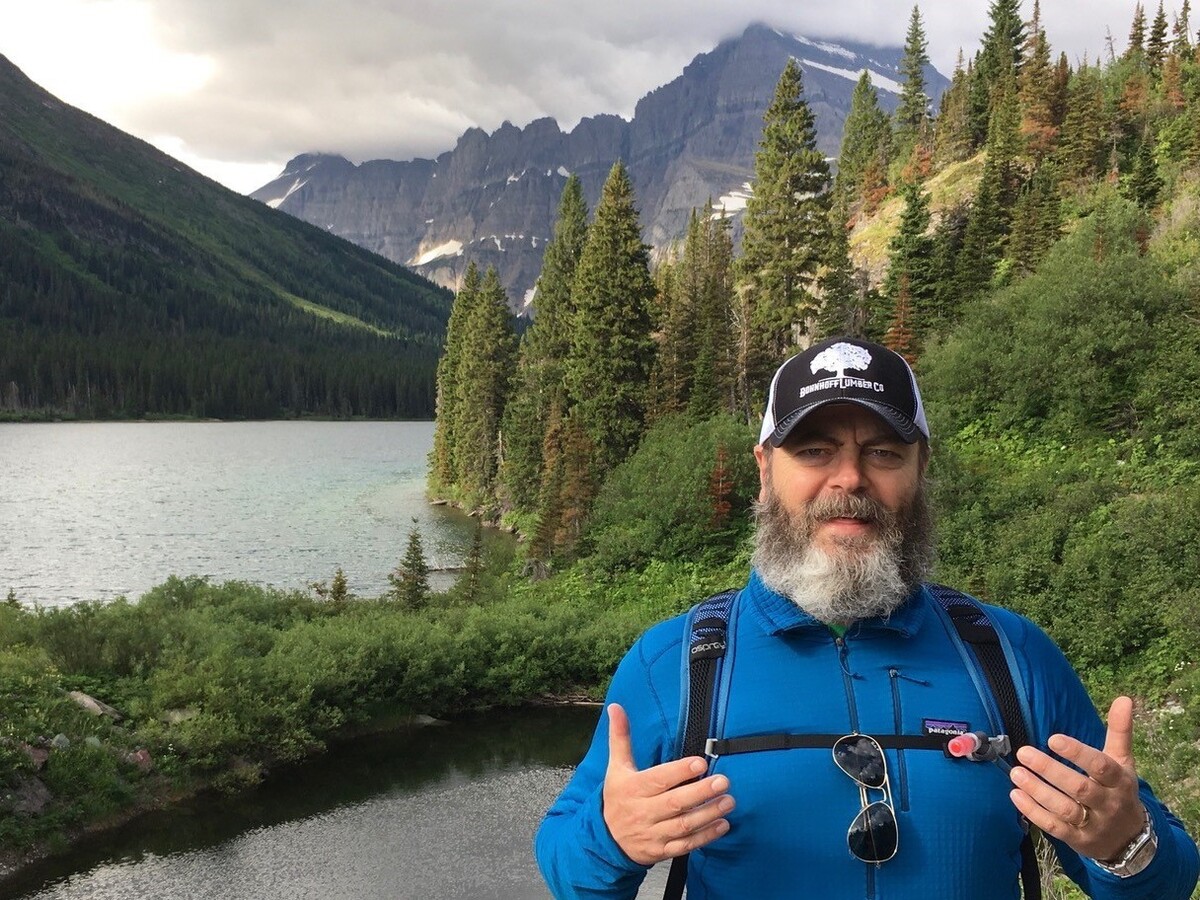 Nick Offerman’s new book is an appreciation of the outdoors. It includes sections on hiking Glacier National Park in Montana.

Nick Offerman is best known as Ron Swanson on Parks and Recreation, and is perhaps the most famous actor who also owns a woodshop. He’s also a comedian, musician and author.

And in his new book, he’s making it known that “outdoorsman” is also on his list of hobbies.

Though he lives in Los Angeles, “I feel a hell of a lot better after I walk in the woods,” he tells NPR’s Scott Simon on Weekend Edition.

Where the Deer and the Antelope Play: The Pastoral Observations of One Ignorant American Who Loves to Walk Outside is a reflection on some of Offerman’s outdoor experiences over the last few years. They include a hiking trip in Montana’s Glacier National Park with musician Jeff Tweedy and writer George Saunders, a trip to visit sheep farmer and author James Rebanks in North West England, and a road trip with Offerman’s wife Megan Mullally and their dog Clover across several states.

Offerman met NPR in the great wilderness of New York City’s Central Park in the shade of what he observed was a “lovely and healthy Japanese maple” tree to talk about his love of nature.

On the origins of his fondness for the outdoors

I grew up in a small town, and that was kind of my pastime was riding my bike to the creek and going fishing with my family and building a treehouse. And I guess I never got out of the habit. I need to get out and look at the creek or look at some trees to keep myself from being affected by Los Angeles traffic or too much looking at my iPhone. 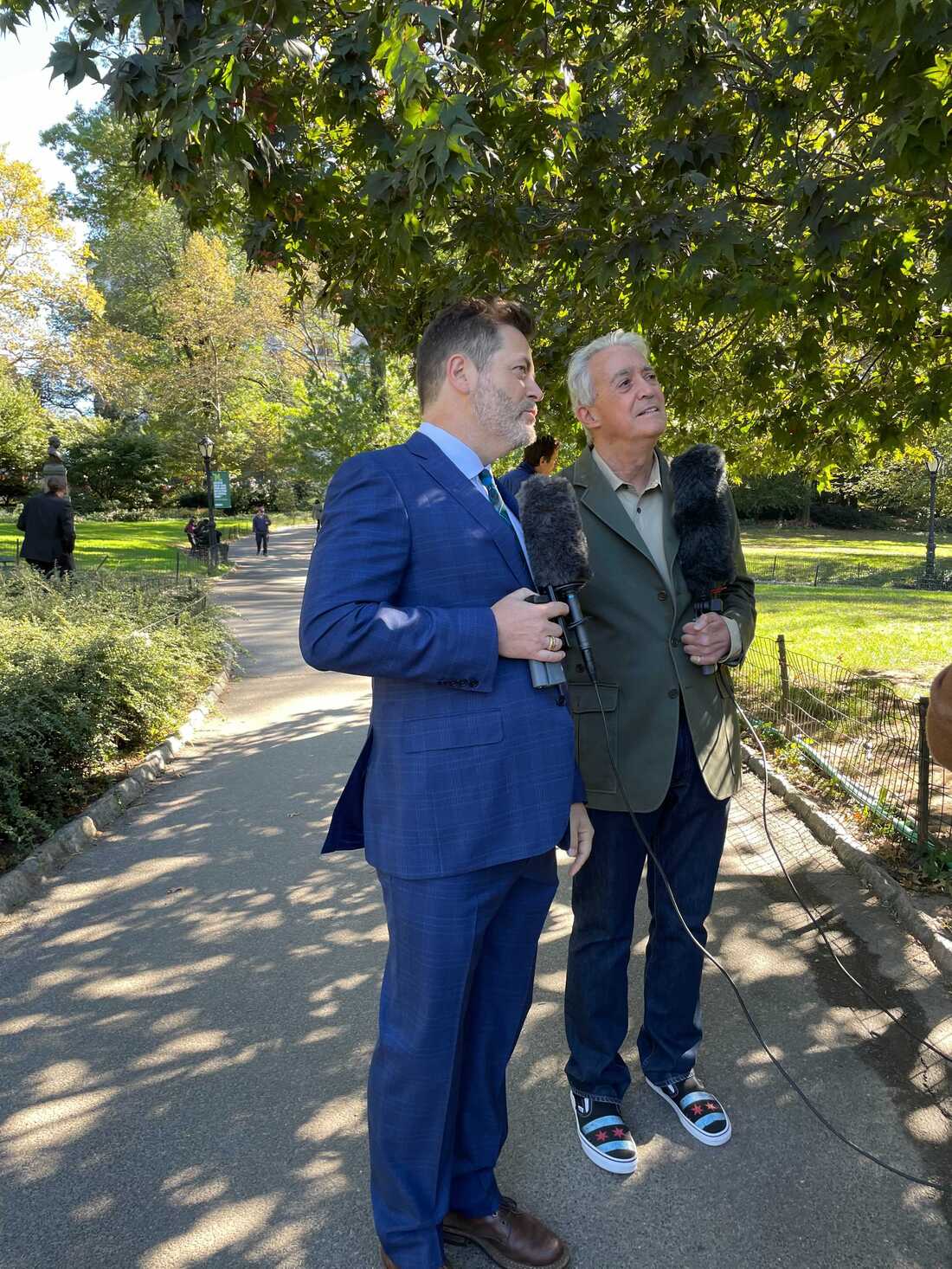 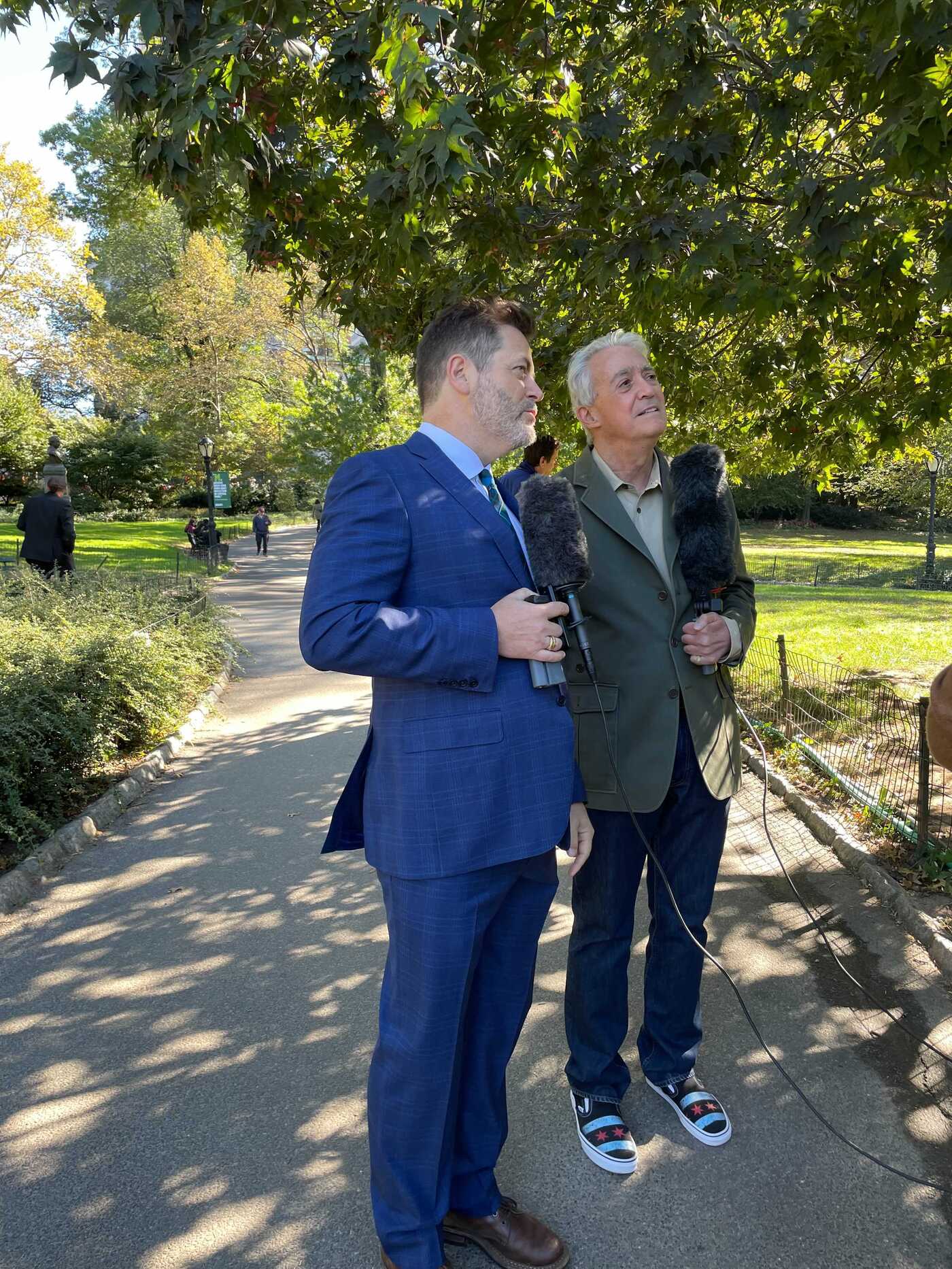 Nick Offerman and NPR’s Scott Simon visit New York City’s Central Park. “I feel a hell of a lot better after I walk in the woods,” Offerman says.

On what he finds outside

What I usually find is solace. I’m not a botanist or a birder, but I greatly enjoy all of the flora and fauna. But I’d say it’s more of a state of mind that I’m looking for. I can walk on a trail almost anywhere in any climate and say, “What a delightful walk this is.” And there, I’ve just killed three hours where I didn’t spend any money or have to shoot at anything.

On what he sees in an individual tree

I don’t know. For me, it’s part of my, I guess my therapy and my creative process is I generally don’t focus in on things. I more [often] wander. There’s a bit in the book about it where George Saunders and Jeff Tweedy and I … hit the trail and what we talk about is the very solace you’re asking about. 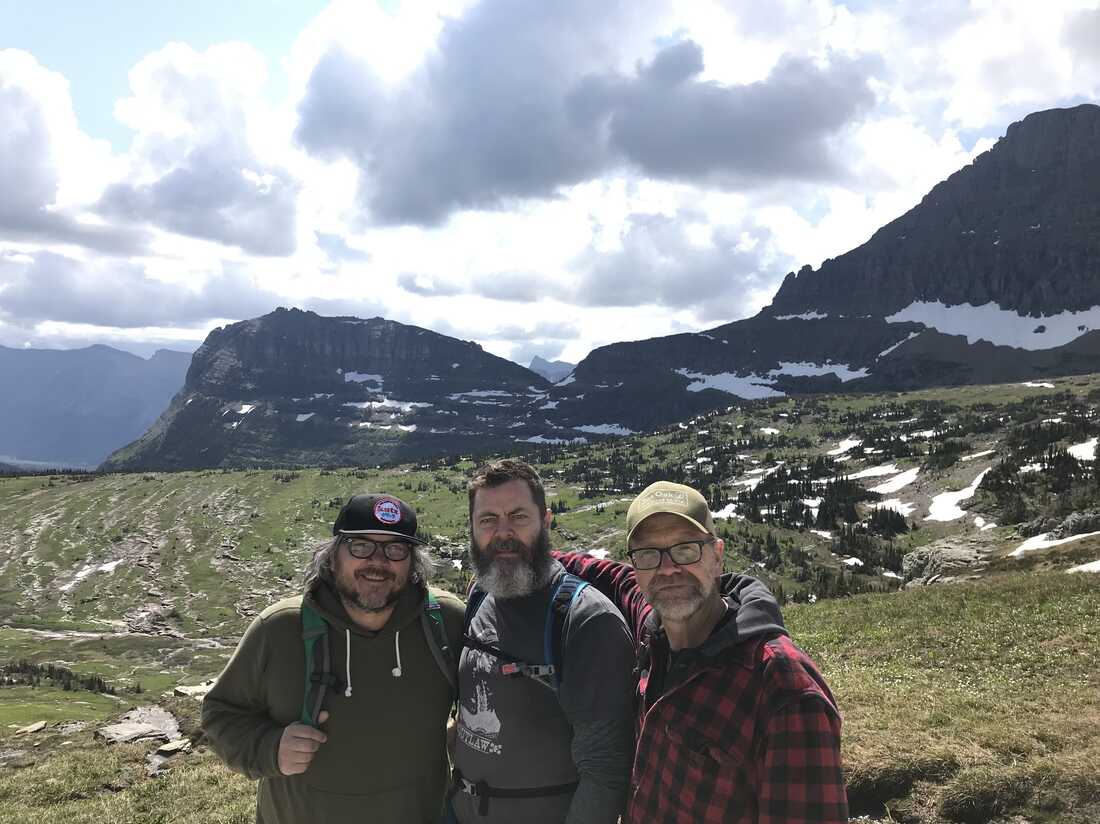 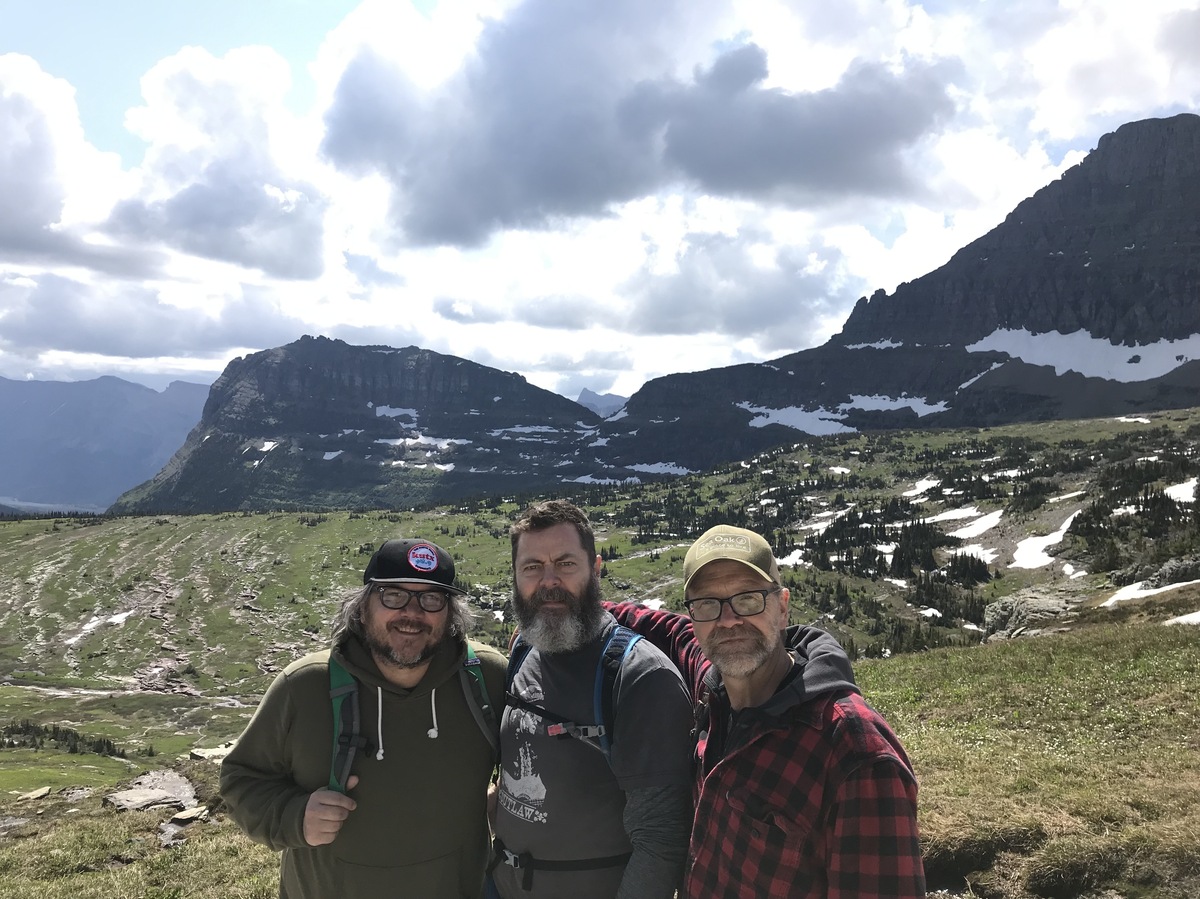 On how diversity in nature relates to human diversity

We as humans will always be fallible. That’s always my opener. And with that in mind, looking at the history of just our country, it’s so easy to see the amazing things we’ve accomplished. And it’s also so easy to see the mistakes that we’ve made. And so that’s my hope is to open our minds to that fallibility that then allows us to own those behaviors and say, “OK, so we did this poorly. We did this bad. How can we do it better?”

Because we’ll never be done evolving our civilization. Our beautiful American experiment that ostensibly on paper is designed to make an equal amount of happiness and justice for every citizen has a long way to go. So in order to achieve that, which I think is absolutely what our goal should be, we have to keep our eyes and ears and hearts open to that diversity of nature.

On how to experience nature while living in a city

A lot of our municipalities do a wonderful job of providing green spaces. That’s part of what I’m trying to encourage in my readership is to find where you can be delighted. If you’re in a city or a suburb, if you have trouble finding park land or public green space, the wonderful thing about nature is that it literally works every place.

And so if you have a windowsill, you can grow any number of plants. You can grow herbs or tomatoes or garlic. I encourage people — something that’s really fun is to plant different deciduous trees or conifers. I’m a deciduous man myself, but you can plant trees on your windowsill and grow them until they’re big enough to take them somewhere and transplant. …

I love cities and I love nature. I would rather not be limited to one or the other. Part of the reason we have to always remain open to our fallibility is because … Mother Nature has something else in mind for the pack of molecules that’s standing here in these brown boots right now.