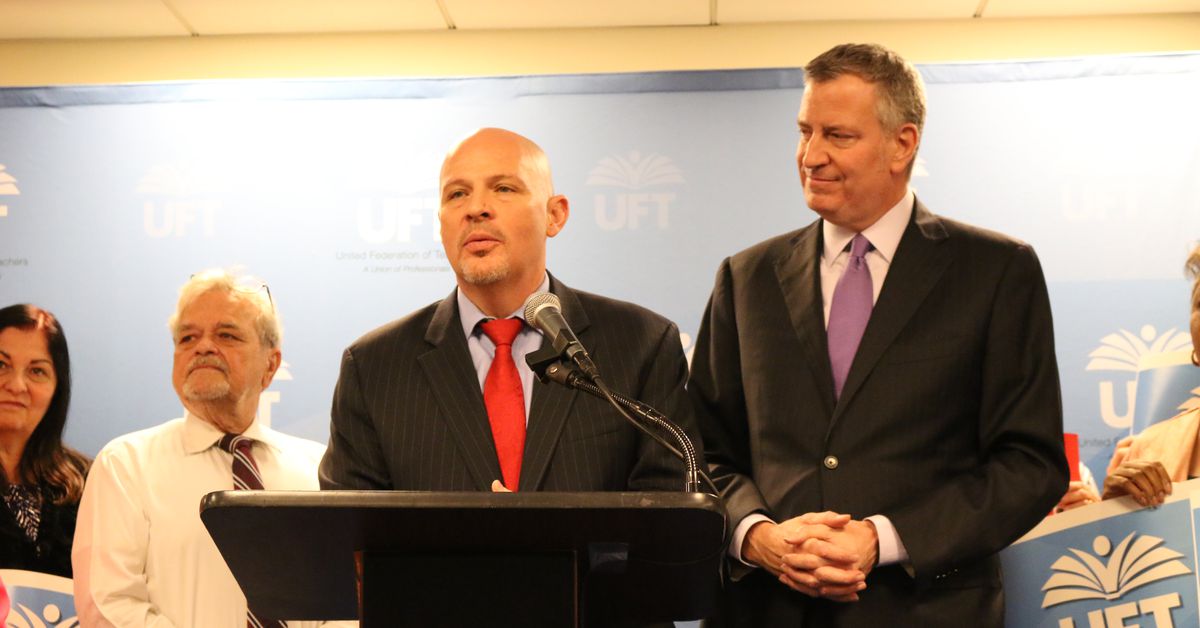 New York City schools will not open their doors to students on Sept. 10, as originally planned, Mayor Bill de Blasio announced Tuesday after hastily reaching a deal with union leaders who had warned it wasn’t safe to reopen buildings next week.

All students will begin a “transition and orientation” period on Sept. 16, and those opting for the hybrid schedule will return to their classes in school buildings on Sept. 21. Teachers are expected to report to buildings on Sept. 8, as planned.

The mayor faced a threat of a teachers strike and demands for a delay from hundreds of principals across the five boroughs who said it was impossible to prepare to reopen the doors of the city’s some 1,800 schools while still facing the threat of the coronavirus. The announcement comes after the city’s teachers union had been threatening to authorize a strike. A vote had been scheduled Tuesday afternoon for the union’s 3,200-member delegate assembly.

Pushing back the return date gives teachers and principals more time to prepare for an unprecedented school year, which will require educators to overhaul everything from how children stream into their school buildings to how to teach young learners to read through a computer screen.

The agreement between the city and labor leaders includes random, monthly testing of staff and students for COVID-19. Officials said 10 to 20% of a school’s population could be randomly tested based on its size. Parents will need to consent to their children being tested. Sampling will happen “in or near” school and will be self-administered — not the more invasive swabs which reach far back into the nasal cavity, de Blasio said.

Testing had been one of the major sticking points for the United Federation of Teachers, whose leaders had called for wide-scale antibody surveys to be required of both staff and students. The mayor had remained publicly opposed to mandated testing up until the morning before the new agreement was announced, and instead the city only encouraged teachers to get tested for the virus.

On top of safety concerns, like whether classroom ventilation was up to par or whether schools received orders of PPE, school leaders worried they could not work out the logistics of delivering instruction given ballooning staffing needs to teach students in both fully remote classes and in hybrid classes, where they’ll be learning in class for one to three days a week and virtually the rest of the time.

Many principals have been working all summer to meet the demands of various new requirements for social distancing and other health-related measures, often without concrete guidance from the city, they said. As the city continued to trickle out new guidance in recent days — including over 100 pages worth of instructions to principals sent just days ago — many principals grew increasingly exasperated by the impossibility of opening on Sept. 10, as they balanced the fears of teachers afraid to return to the classroom and concerns from parents unable to plan without certainty of knowing what their children’s school year would look like.

Roughly 37% of students have so far opted out of returning to school buildings, and families are allowed to opt out of in-person classes any time, making it difficult for principals to plan. City officials have declined to say how many teachers have so far received accommodations to work remotely, but previously estimated that up to 20% might do so. Teachers can apply for accommodations any time of year as well, adding to staffing challenges.

Regardless of whether students are learning remotely full time or plan to a mix of in-person and remote, the majority of student instruction will still be remote. There are still significant questions about whether the department has taken adequate steps to improve remote instruction since school buildings shut down, a task that is falling to individual schools without clear guidance from the department.

Families who struggled with online learning worry that remote instruction will not be much better than it was in the spring. Then, schools were operating in emergency mode as the pandemic shut down the economy, eventually infecting more than 230,000 people and killing at least 19,000 — with another 4,650 suspected deaths attributed to the virus, health department data shows.

Delaying the start of school is not unprecedented. New York City schools opened 11 days late in 1993 as officials cleared asbestos out of classrooms across the boroughs.

This is a developing story that will be updated.

During a contentious six-hour meeting the Philadelphia Board of Education unanimously passed a controversial corporate tax break, while one member...

Denver students push the district to include Black, Latino, Indigenous stories in curriculum

On a school lawn in Denver Friday, four young Black women told the story of how they pushed an institution...

Live From The Apollo...It's Code Switch!

Denver students push the district to include Black, Latino, Indigenous stories in curriculum