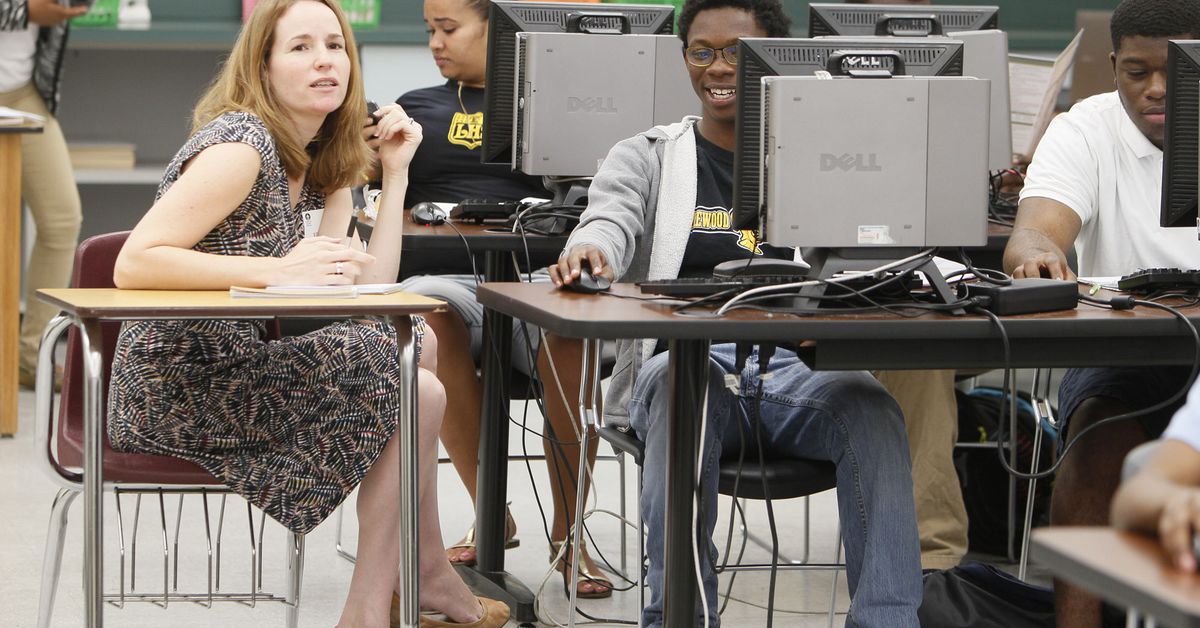 I moved nearly 3,000 miles from my home in Washington State to take my first job as an education reporter. I was so excited to cover education that I agreed to work in an office I had never seen, in a part of Florida I had never visited. I started the job just before Christmas, when all of the other reporters were on vacation. I was sitting in an empty newsroom, listening to the scattershot noises of the police scanner, when the door burst open and in walked one of the most colorful characters I have ever encountered in a newsroom: the gossip columnist.

He grabbed a desk nearby, and I listened with a mixture of horror and fascination as he spoke to a source. Every third word out of his mouth was profanity. Finally, he hung up the phone and introduced himself. When I said that I was the new education reporter, he scrunched up his nose and spit out words I’ll never forget.

“No one cares about education. Find the scandals. They care about scandals,” he said.

You might expect that attitude from a gossip columnist, but I have encountered it many times in my 18 years as a journalist, often from editors who had the power to shape news coverage of their communities. The idea that education is somehow less important, less interesting, or less relevant than politics, business, or crime has always been wrong. These last few months — as public and private schools across the country have closed their buildings and struggled to reopen during the coronavirus pandemic — have shown just how wrong. The vital and complex role that schools play in our society has been vividly demonstrated for the doubters. There has, perhaps, never been a more important time to invest in education journalism.

That’s why I am proud to join Chalkbeat as a story editor, working with our bureaus in Chicago and Philadelphia. As a growing nonprofit news organization, Chalkbeat has a mission about which I care deeply. Journalists here are “committed to covering one of America’s most important stories: the effort to improve schools for all children, especially those who have historically lacked access to a quality education.”

When done well, education coverage is about race, gender, class, and politics. It’s about racism and sexism. It’s about housing and income. Covering education isn’t just worthwhile for news organizations that are invested in their communities. It’s essential.

During my career in journalism, I have sometimes had to fight to write stories about children who weren’t well served by the American education system, particularly Black students in under-resourced communities. At times, the message that I should focus on other students or other schools was conveyed subtly. Other times, it was explicit. And yet, some of my best work as a reporter was done in defiance of that message. At Chalkbeat, coverage is centered around equity and, in my short time here, I have seen how seriously the reporters, editors, and other staff members take that mission.

In Philadelphia, where Chalkbeat just launched its newest bureau, senior writer Dale Mezzacappa, explained one of the reasons that she has continued to write about education: “Bluntly, the American system doesn’t just tolerate racial and economic segregation and inequity, it is built on it. And it sucks all of us in. Without a second thought, individual families build their lives around the idea of ‘moving to a good school district,’ which most often means leaving one that has many low-income students (and usually, students of color) for one that has fewer.”

Chalkbeat also has a deep commitment to local news, with eight bureaus operating across the country. It’s both thrilling and bittersweet to join a news organization that is expanding. In the last two decades, I have worked at four local newspapers. All four have gone through devastating and repeated rounds of layoffs and buyouts, while closing regional bureaus and shrinking coverage areas. Every education team I have been part of has grown smaller, and the two bureaus I worked in years ago have closed. Like so many journalists, I have endured pay cuts, abysmal health insurance, and starting a family without the benefit of paid maternity leave.

The collapse of local news has been devastating, with so many of my former colleagues leaving the news industry. It is because of these experiences that I value what Chalkbeat has been able to build: a sustainable nonprofit newsroom with a diverse mix of funding that serves as a model for other news organizations.

Despite all of the changes in journalism, I have been fortunate to continue to cover education, first as a reporter and now as an editor. It is the easiest thing in the world to accept a job at a news organization I admire, with colleagues I rely on — first, as a reader — to tell one of America’s most important news stories.

Scholastic, with YouGov, surveyed public school Pre-K–12 educators in winter 2020 to gather their thoughts on equity in education, literacy...

India’s National Education Policy has been lauded as a means to establish India as an international education destination. However, institutions...

How to Use Canvas and Google Together

Return to Learn with The Art of Education University Whether you are a pro at using Canvas (Learning Management System) or...

During a Pandemic, Can College Be … Fun?

In normal times, a signature feature of college life is parties—often immortalized in so many Hollywood films where students let...

Race Underneath The Skin