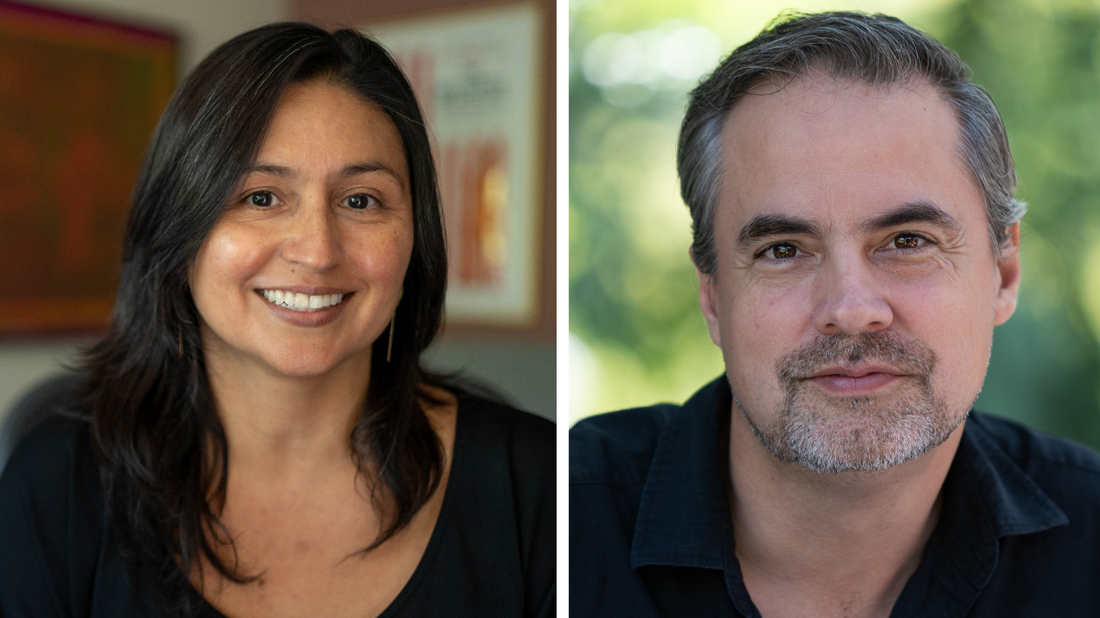 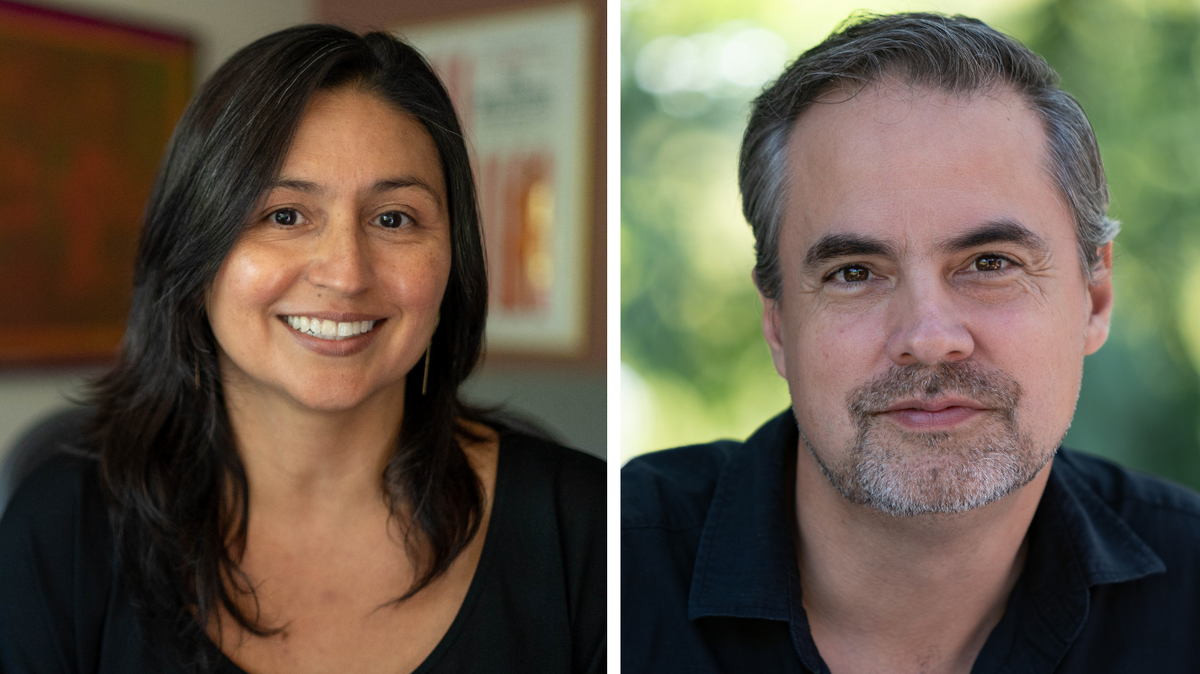 Alex Rivera and Cristina Ibarra share an whimsical, avant-garde sensibility to filmmaking. Individually and as a power couple, they’ve created fresh, experimental cinema. And this year, they are each getting their own MacArthur fellowships, otherwise known as “genius grants,” making them the first married couple to each win the prestigious award at the same time.

Deportations, immigration and the U.S.-Mexico border remain themes of their work, individually and together. They worked on their first production together in 1999, on a documentary about Indigenous communities in Mexico and the U.S. For the film, they traveled to Mexico for a conference on the subject, and got in trouble when they tried to meet with a group of Zapatistas who’d been excluded from the event.

“There was a government official from the conference who came up to us saying, ‘Article 13 of the Mexican Constitution says that foreigners can’t meddle in national affairs,” recalls Ibarra. “So we were really nervous (when they) threatened to expel us.”

“We almost got deported from Mexico,” says Rivera. “And that was kind of on our first date.”

For Cristina Ibarra, stories about immigration and the border are deeply personal

Ibarra was born and raised in El Paso Texas, across the border from Juarez, Mexico. “I grew up with family on both sides crossing the bridge every weekend to go see my abuelita in Juarez, my tía or my tío,” she says. “But whenever I turned on the television, it was always white. And here I am, this brown girl. I just felt like I never saw myself represented.”

Ibarra was the first in her family to go to college. At the University of Texas, Austin, she learned about social justice movements and Chicano history and studied film production. She began exploring her Mexican-American identity by making films, like her humorous short, Dirty Laundry, A Homemade Telenovela. She stitched together clips from old family movies and recruited her relatives to act in her fictional coming-of-age story.

Ibarra went on to make a documentary called Las Marthas. Broadcast on PBS, it featured debutantes in Laredo, Texas, who dress up in colonial-style ball gowns to portray figures from the American Revolution.

Over the course of making the film, Ibarra learned that every year for generations, las Marthas (as in Martha Washington) have celebrated George Washington’s birthday and that the largest commemoration for the first U.S. president was in Laredo.

“I was very curious about why you have these Latinas and their families celebrating the conquest, basically,” says Ibarra. “What I discovered in following them as they’re preparing for their presentation is that alongside celebrating the patriotism of the United States, they’re also celebrating the founding families of Laredo, and how they were able to maintain their status and their power even after the U.S.-Mexico war…. where many other families lost their land in Texas.”

Her film talked about the historical ties between Anglos and Mexican families, all wrapped up in sparkly gowns.

As one of the young debutantes says, “We didn’t cross the border, the border crossed us. My family has been under Spanish, Mexican and American governments and hasn’t moved an inch.”

Alex Rivera’s films have also been influenced by immigration stories, as well as activism and sci-fi

For Peruvian-American Rivera, the border was more of a concept.

“I grew up in New York, going to Peruvian restaurants for Inca Kola and talking to my abuela in Lima, and hearing stories about the Shining Path and about bombings in Lima,” he says. “Like, I’m in New York, like watching Gilligan’s Island on TV and I have Peruvian family that are facing, like, a guerrilla war? And what is that? And so the border thinking, and the theorizing of a kind of third space, you know, it was a way to get a grip on my own experience.”

As a teen, Rivera worked for folk musican Pete Seeger, who showed him how to mix art and political activism. At Hampshire College, Rivera made his first film, Papapapá.

It was an experimental documentary about two Peruvian immigrants: The ancient Incan potato, the papa (on its way to becoming a potato chip) and his immigrant father, his papá (and his journey to become an assimilated American couch potato).

Rivera says his film was meant to be “a kind of humorous and sort of absurd, but hopefully heartfelt, exploration of nostalgia, identity, and what it means to be uprooted.”

Rivera made music videos and wedding videos while working on his own films, including several sci-fi films about immigrants whose labor was replaced by machines. Sleep Dealer was his 2008 cyberpunk thriller set on the U.S.- Mexico border.

Their 2018 marriage was followed by even more collaboration

Rivera and Ibarra had a daughter and got married in 2018. They also teamed up to make a film about a group of young undocumented immigrants, “Dreamers” who went undercover in a Florida detention center.

“Our mission: stop the deportations. Our strategy: organize, escalate, shut something down,” says Marco Saavedra, with the National Immigrant Youth Alliance. In the film, they infiltrate the for-profit institution imprisoning hundreds of multinational immigrants, without trial.

The Infiltrators was a hybrid film based on real events: part documentary, part scripted reenactment. After it premiered at the Sundance Film Festival in 2019, one of the other real-life main characters, Claudio Rojas, was deported to Argentina. Rivera and Ibarra say they felt that was in retaliation for speaking out against the detention centers. They worked with the activists to have Rojas reunited with his family in Florida.

“We just thought their work was phenomenal,” says Marlies Carruth, program director of the MacArthur Fellows Program. She says Rivera and Ibarra are being honored for telling relevant American stories, both individually and together.

“Cristina brings almost a patient, graceful eye to her solo work,” she says. “Her lens is one of joyful enchantment kind of youthful anticipation. There’s a local magic quality to her work, and she shows deep respect for ritual and ancestry.”

By contrast, she says, “Alex’s lens is more of an impatient activist. He quickly wants to draw your attention to political issues at a very high level: workplace exploitation, flawed immigration policy, abusive technology, labor alienation.”

Together, Rivera and Ibarra say their MacArthur awards will allow them to continue what they love, which Rivera describes this way: “to make experimental work, punk the system, build our own thing outside of Hollywood.”

Now, they’ll have the funds to make more independent movies their way.