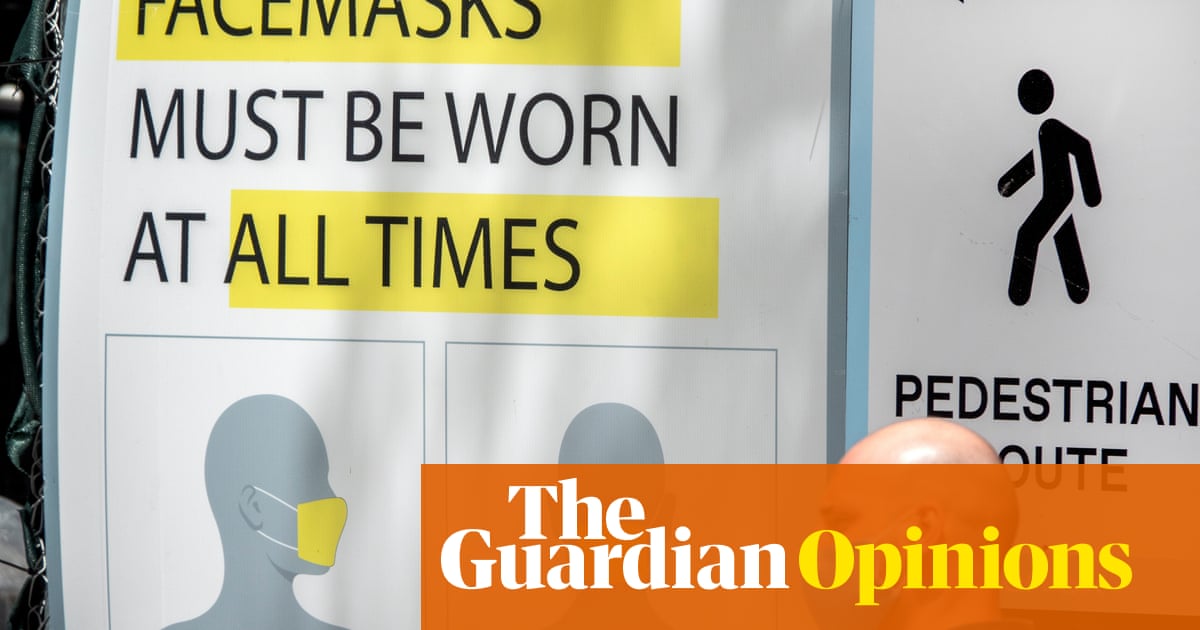 Since June, the World Health Organization (WHO) has officially recommended wearing cloth or disposable face masks in public spaces where social distancing is difficult, and where there is widespread transmission, like on public transit or in crowds. Masks provide an extra layer of protection against viral transmission; until a Covid-19 vaccine becomes available, anything that even minimally reduces transmission – from hand-washing to mask-wearing to avoiding bars (for now) – can save lives.

There have been more than 3.5m confirmed Covid-19 cases in the United States this year, with a record daily high of 74,000 new cases confirmed last week. Given the seriousness of the disease – we now know asymptomatic people transmit Covid-19, and emerging research shows that even mild cases can have an outsized impact on a person’s health, potentially causing strokes and serious brain disorders – many Americans, like people all over the world, now wear masks as a simple precaution against transmitting the virus when outside the home.

A Gallup poll of 2,451 American adults taken this April found that one-third always wears a mask outside their homes, with another third reporting they wear a mask sometimes.

That means most Americans are willing to do a small thing they understand contributes to the safety of their communities. Yet it leaves the one-third of respondents who reported never wearing masks. What’s going on with them?

There’s no one answer to the question of why certain people do not partake in what many others see as a civic duty, or simply a sensible way to behave. Some may have extenuating health conditions that preclude their ability to safely wear a mask. For others, the deliberate choice not to wear a mask has become a way to signal their personal worldviews, ideologies and partisan affiliations.

The Gallup poll also revealed that US mask-wearers and anti-maskers are largely divided along party lines, with 75% of Democrats but fewer than half of Republicans saying they had worn a mask in public. One factor contributing to this difference in approach could be that the pandemic has, thus far, hit coastal, Democratic-leaning America the hardest. Republicans, on the other hand, are more likely to be living in counties where the economy has been affected more than public health.

In April, Donald Trump undermined the CDC’s recommendation that the public wear masks, saying he was ‘choosing not to do it’

The idea that wearing a mask signals submissive weakness or a forfeiture of individual freedoms has also gained currency with some anti-maskers. Their skepticism may be linked to everything from disapproval that the CDC and Dr Anthony Fauci’s stance on masks changed as the pandemic developed (initially, PPE was only recommended for healthcare workers), to resentment that certain regions and businesses are enforcing pro-mask policies that infringe, however infinitesimally, on individual liberty. There are also QAnon conspiracy boards where users theorize that Covid-19 is itself a hoax. Then there’s the behavior of rightwing political pundits and the president himself, who have often cast doubt on Covid-19’s importance.

In May, RR Reno, the editor of the conservative religious journal First Things, ranted on Twitter that “The mask culture [is] fear-driven,” bizarrely claiming soldiers fighting in the second world war were “not cowards” because they did not wear masks (they did). In April, Donald Trump undermined the CDC’s recommendation that the public wear masks, saying he was “choosing not to do it”, contributing to the perception that masksappear weak. During Trump’s visit to an Arizona Honeywell mask-manufacturing plant in May, reporter BrieAnna Frank noted that supporters who gathered outside the facility to cheer on the president also derided mask-wearing journalists. Afterwards, on Twitter, Frank recounted what one man said: “It’s submission, it’s muzzling yourself, it looks weak, especially for men.” Indeed, research substantiates that some men do not feel secure in their masculinity when wearing masks, choosing to prioritize fragile ego over human life.

As the New York Times’ Amanda Hess observed, to those who express their support for the president by refusing to wear a mask, anyone who does wear one isn’t just being cautious – “they’re attacking the president and his supporters.” To illustrate this tension, Hess described a sign on the door of a Texas restaurant banning masks: “Due to our concern for our customers, if they FEEL (not think), that they need to wear a mask, they should stay home until they FEEL that it’s safe to be in public without one,” it read.

Indeed, some anti-maskers claim to not only be concerned about the bad optics of taking a simple precaution during a terrible crisis; they also question the science behind mask-wearing despite the many scientific studies that have now proven beyond a doubt that masks do help reduce the chance of person-to-person viral transmission. In addition to being misleading, “scientific” anti-mask arguments are hard to take seriously given how transparently they have become a tool of post-hoc rationalization for what was always going to be the immediate position of a certain subset of conservative America anyway – that the economy supersedes all.

More optimistically, on Tuesday Trump encouraged all Americans to wear a mask when they weren’t able to socially distance. And last week also marked the first time he wore a mask in public – an event which could encourage America’s more extreme mask-skeptics to also don face coverings where appropriate or required. If so, they will have waited for millions to sicken before ceasing to pretend that masks equate oppression, and finally acting to protect themselves and their country. Better late than never, I suppose.