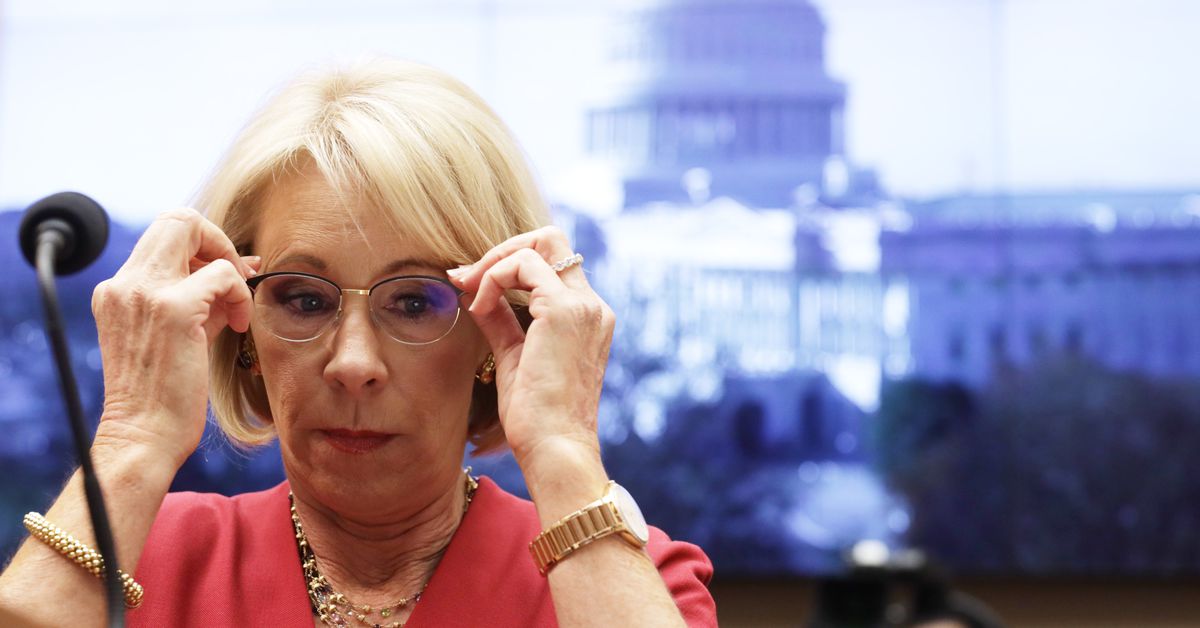 A federal judge has voided a controversial rule created by Education Secretary Betsy DeVos that would have effectively directed more coronavirus relief dollars to private schools. The ruling applies nationwide.

“In the end, it is difficult to imagine how Congress could have been clearer,” wrote Judge Dabney Friedrich, who was appointed by President Trump. “The Department’s arguments to the contrary do not change this straightforward conclusion.”

This means that DeVos’ rule is gone, at least for now: three other cases are pending and the department could appeal the decision. Regardless, the ruling represents a major setback for DeVos, who has contended that her approach to distributing the relief money is fairer, despite limited political and legal support.

A spokesperson for DeVos did not immediately respond to a request for comment or questions about whether the department plans to appeal.

At issue in the case is how over $13 billion of federal relief dollars for education should be apportioned to private schools. The CARES Act, passed in March, says that money should be allocated in the “same manner” as under Title I, which provides private schools with services based on how many low-income students they serve.

DeVos took this seemingly straightforward edict and said that it was ambiguous. The education department said, in guidance and then later in a legally binding rule, that the aid to private schools should be based on the share of all students in the area who attend them. (In the rule, the department did provide districts an alternative to avoid this, but it would also limit how districts used their own relief dollars.)

Because private schools tend to serve relatively few low-income children, the move would effectively redistribute dollars from public to private schools. It’s not clear precisely how much money is at stake nationwide, but it is likely in the hundreds of millions of dollars.

Critics and several legal scholars said DeVos was subverting Congress’ clear intent. Now, three federal judges have agreed, in remarkably similar opinions. (A fourth case brought against the rule has not yet been ruled on.)

DeVos created her rule “under the guise of a manufactured ambiguity,” wrote one judge, who issued a preliminary injunction against the rule last month in a case involving the state of Washington.

Another federal judge issued a preliminary injunction across several states and districts, writing, “An executive agency like the Department has no authority to rewrite Congress’s plain and unambiguous commands under the guise of interpretation.”

Similarly, in the most recent decision, Friedrich wrote, “Congress expressed a clear and unambiguous preference for apportioning funding to private schools based on the number of children from low-income families.” The statute, she said, “cannot mean the opposite of what it says.”

The ruling here is more far-reaching than the previous two cases. Unlike the prior two cases, it is not simply a preliminary ruling but a final judgement, albeit one the department could still appeal to a higher court. Second, the ruling applies nationwide.

“This decision sends a clear signal that Secretary DeVos cannot use illegal means to advance her agenda of funneling scarce public resources to private education, to the detriment of our highest need students in public schools across the country,” said Tamerlin Godley, a lawyer who argued the case, which was brought by school districts, public school parents, and the NAACP.

Clarification: A previous version of this article suggested that the Southern Poverty Law Center is a plaintiff in the case. In fact, the organization is part of a coalition that represented the plaintiffs in the case.

Stuck Off The Realness

So What If He Said It?