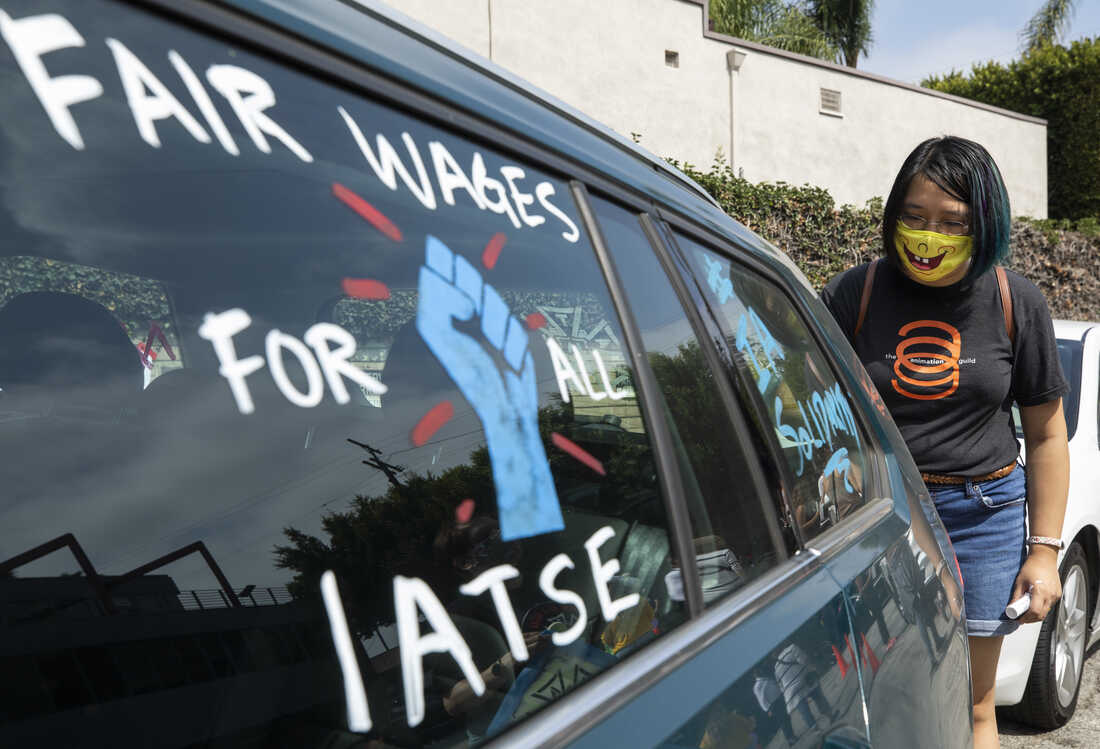 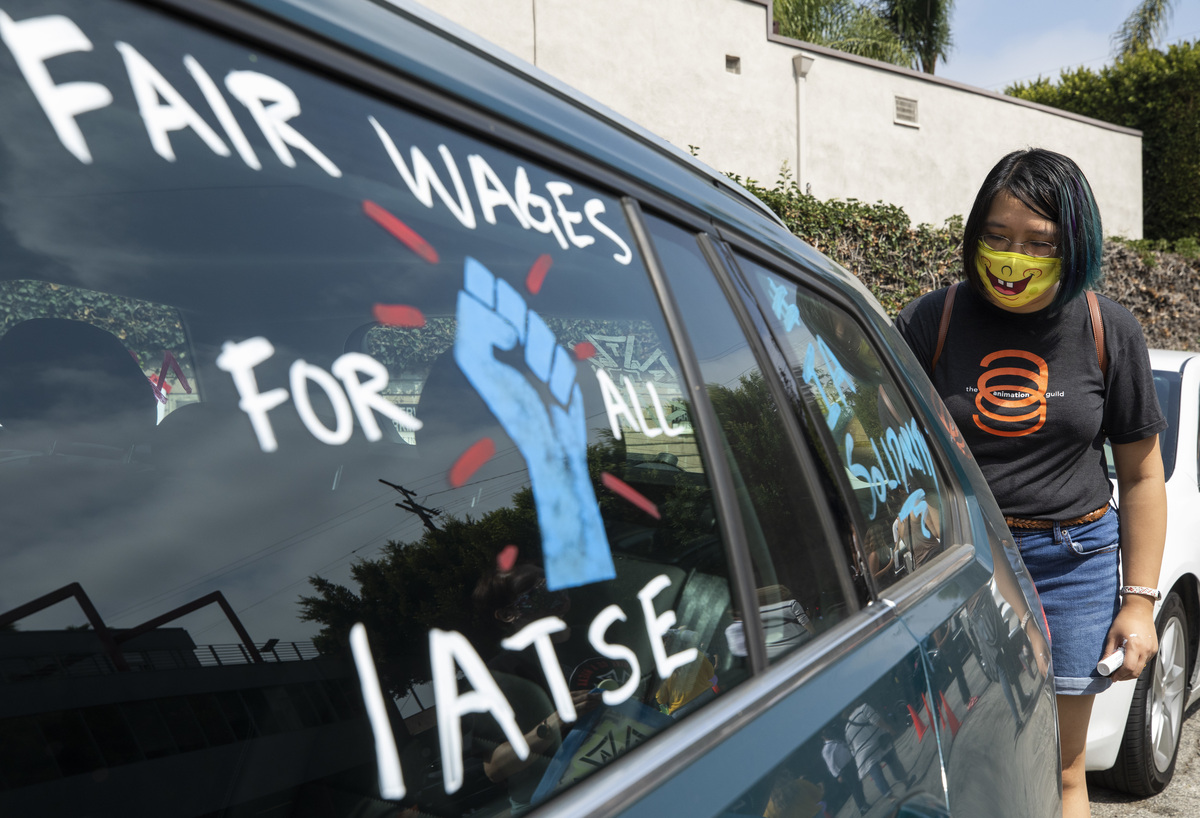 Crystal Kan, a storyboard artist, draws signs on cars of IATSE union members during a rally in Los Angeles in September.

Hollywood film and TV productions could soon shut down if contract negotiations aren’t resolved. Production staff in the International Alliance of Theatrical Stage Employees, or IATSE, voted to authorize a strike Monday over disputes with studio producers about their schedules, pay and work conditions. The threat of an actual strike could be leverage during any future negotiations, which could happen this week as the two sides sit down again for talks.

Members from 13 local unions on the West Coast and 23 other locals around the country — totaling 60,000 workers — voted overwhelmingly to authorize a strike if needed. That could impact everyone from cinematographers and editors to makeup artists and the food workers who feed the casts and crews. Many of them have complained of having workdays longer than 12 hours with few breaks, rates below $18 an hour and miserable working conditions. Some are asking for more compensation for productions that are streamed online and not released theatrically. Since May, their national union has been trying to hammer out new basic agreements with the Alliance of Motion Picture and Television Producers (AMPTP).

“I hope that the studios will see and understand the resolve of our members,” IATSE international president Matthew Loeb said in today’s announcement. “The ball is in their court. If they want to avoid a strike, they will return to the bargaining table and make us a reasonable offer.”

He said the issue is about the quality of life as well as the health and safety of those who work in the film and television industry. “Our people have basic human needs like time for meal breaks, adequate sleep, and a weekend. For those at the bottom of the pay scale, they deserve nothing less than a living wage.”

“No one wants to go on strike. That would be a last resort,” said Rebecca Rhine, national executive director of the International Cinematographers Guild, IATSE Local 600, which represents about 9,000 camera staff and publicists. She said it is “remarkable” that over 98% of the IATSE members who voted chose to authorize a strike if necessary. (Nearly 90% of eligible members cast ballots.) “It’s a clear mandate and a message to employers,” she said. “If we have to go on strike, it would be devastating. We hope we don’t have to. But if it’s necessary, they’ll do it.”

Workers have been sharing their stories on social media, where some complain that their call times are grueling, leaving them with little time to see their families, sleep deprivation and more.

Ben Gottlieb, a lighting technician who moderates an Instagram account featuring experiences from production staff, says he’s heard from many workers. “A lot of people are told they have to choose between the industry and a family. It’s brutal,” he says. “People are frustrated that it’s a prolific, iconic American industry that sort of thrives on these almost archaic work practices.”

In a statement, AMPTP said the producers organization “remains committed to reaching an agreement that will keep the industry working. We deeply value our IATSE crew members and are committed to working with them to avoid shutting down the industry at such a pivotal time, particularly since the industry is still recovering from the economic fallout from the COVID-19 pandemic.”

In an earlier statement, the AMPTP wrote it had listened to IATSE’s demands and offered a package including “substantial improvements in rest periods, increases in wages and benefits, increases in minimum rates for specific job categories” and more.

After IATSE members voted to authorize a strike, the AMPTP wrote that a deal “can be made at the bargaining table, but it will require both parties working together in good faith with a willingness to compromise and to explore new solutions to resolve the open issues.”

If IATSE does call a strike, it would be the first in the union’s 128-year history.