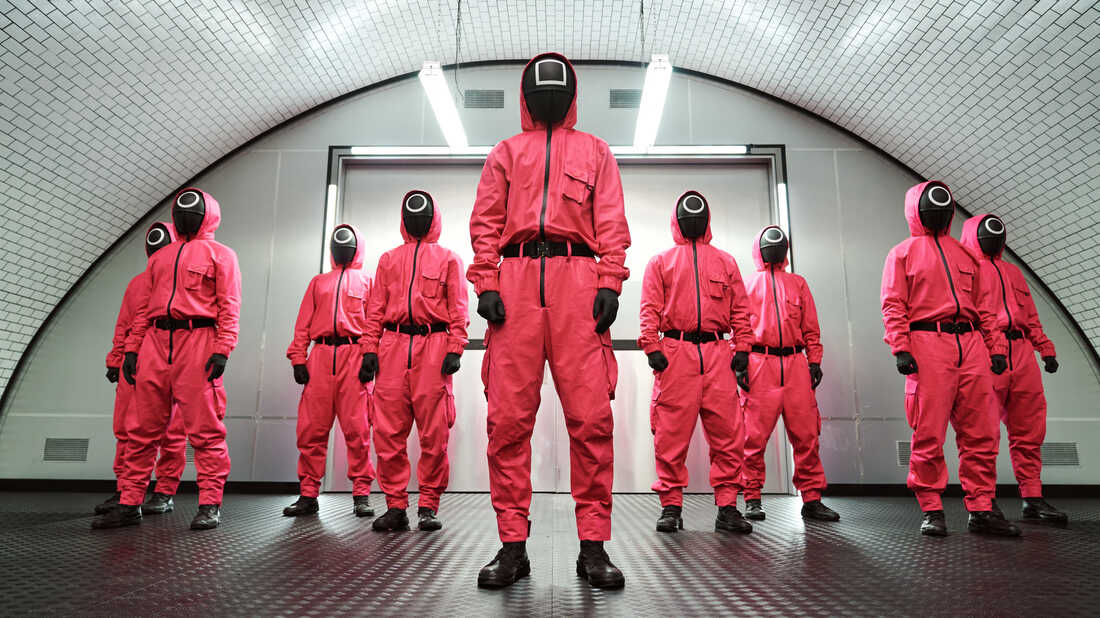 If some of the references in the hit Netflix series Squid Game are going over your head, we can help. Noh Juhan/Netflix hide caption 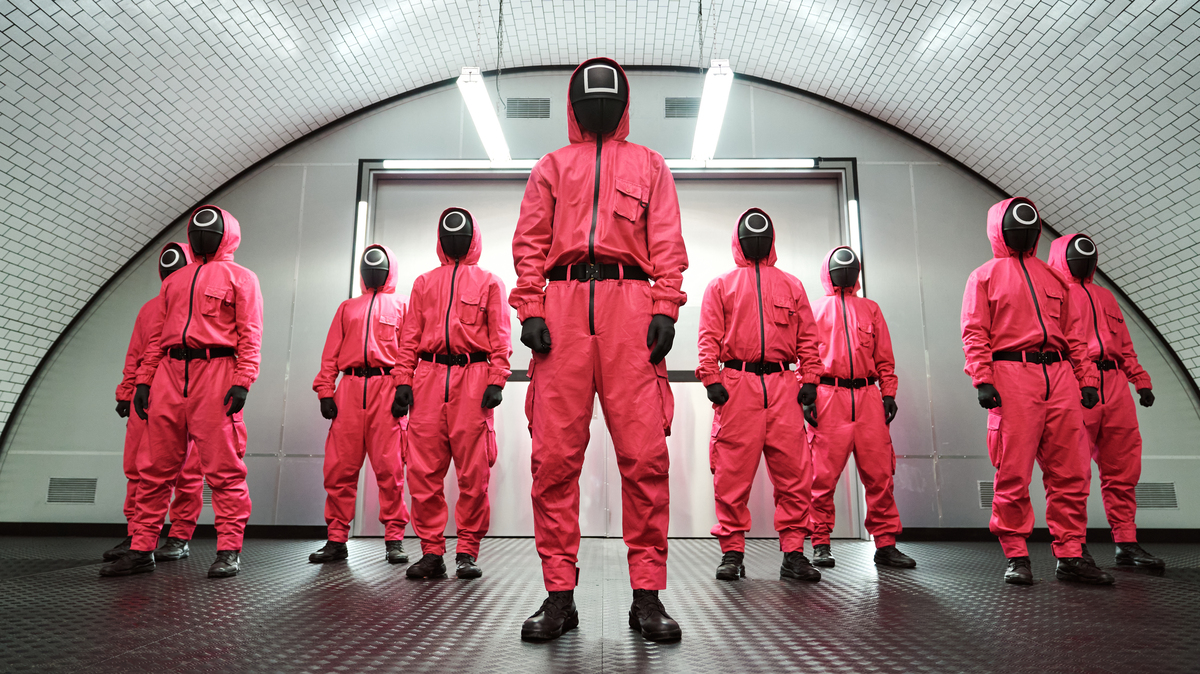 If some of the references in the hit Netflix series Squid Game are going over your head, we can help.

Squid Game. You felt like you were supposed to experience this graphic, debt-ridden survival series, so you did, but you’re still feeling like you missed something.

Well, you’re not alone. Whether you love it or hate it, there’s a lot to digest in this nine-episode Netflix series, from its visceral storytelling to its nuanced portrayal of contemporary Korean life. Peppered throughout the series are blink-and-you’ll-miss-them references to historical events and political jargon that place even more onus on audiences to understand creator Hwang Dong-hyuk’s vision.

Before we dive in, I want to make this clear: This guide will best serve people who are discovering Korean dramas through Squid Game. Korean audiences and longtime fans of the genre may already understand the cultural context and the Easter eggs I’m discussing here. You might even find the series to be underwhelming and overshadowed by its dystopian horrors. And that’s okay too! This is a common response among South Korean viewers like my mom, who was simultaneously delighted and dumbstruck by its international success — but quickly course-corrected to finishing her Korean rom-coms.

And I can’t emphasize this enough — Squid Game is not and should not be considered an intro to South Korean culture and society. But if you’re venturing into Korean stories for the first time and feeling like you may be missing a thing or two, here is a quick guide to catch you up. 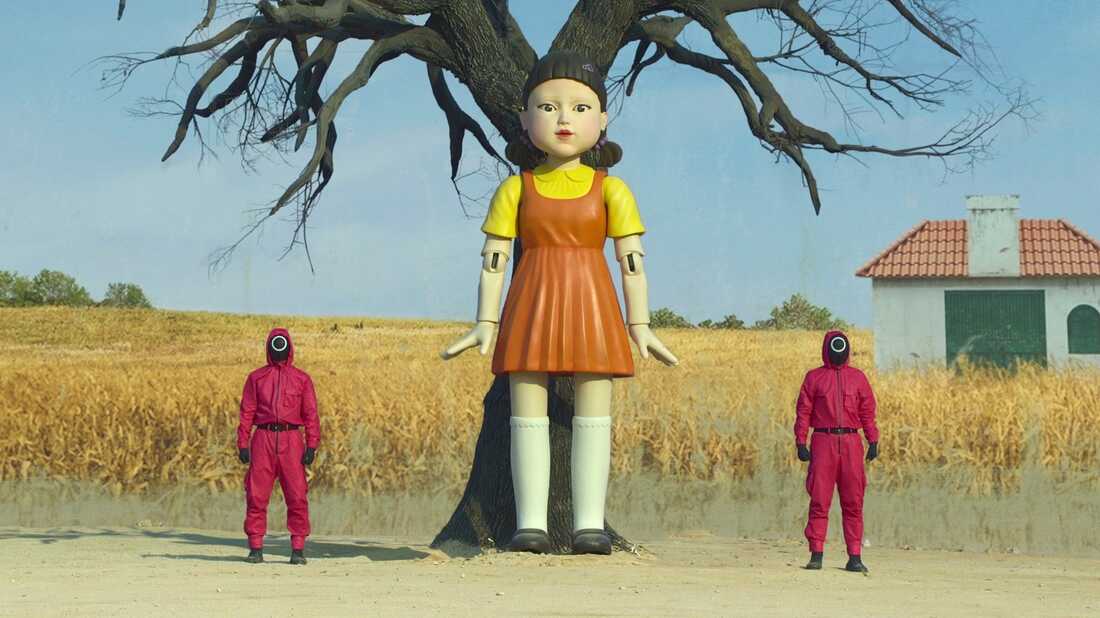 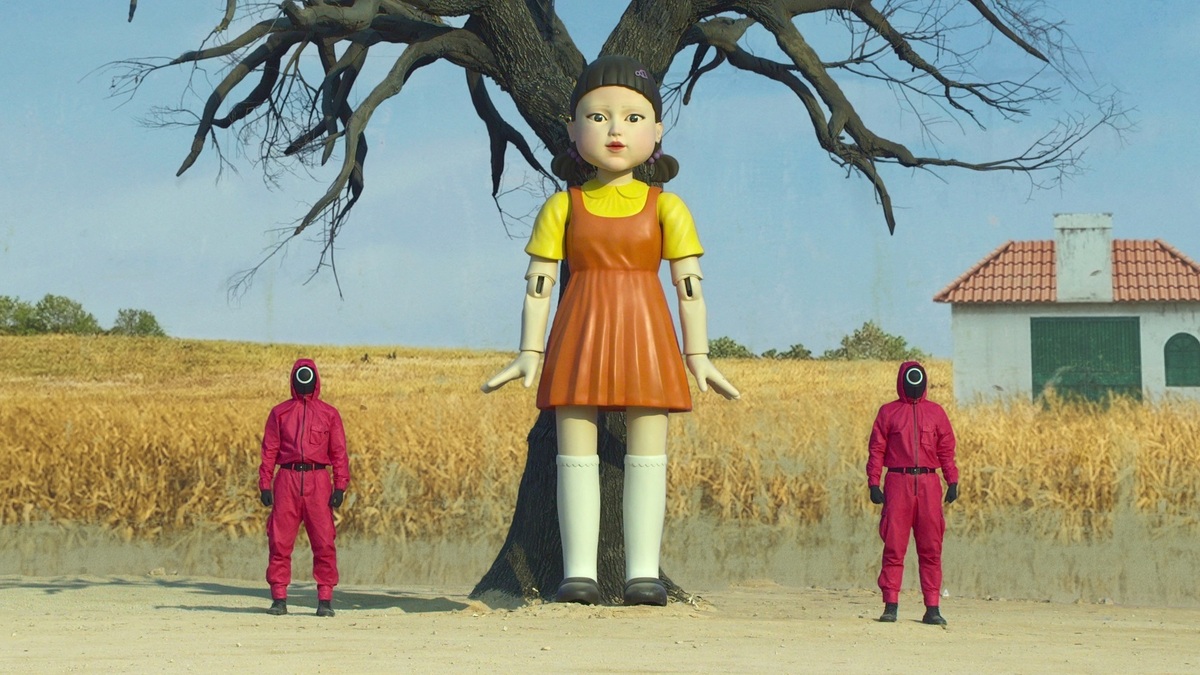 You just finished watching the first round of games — and all you remember is the haunting voice of the “Red Light, Green Light” doll. So here’s a gentle reminder: Squid Game provides financially distressed everyday Koreans, 456 of them, the chance to win a 45.6 billion won (roughly $38 million) cash prize.

From the get-go, the show appears to tap into the universal nature of economic inequality. Suk-Young Kim, who researches North Korean cinema and teaches at UCLA, believes that’s the primary reason for Squid Game‘s international appeal. “Over the years, South Korea has developed a very strong sense of telling stories about exposing injustice, and I think it has a lot to do with Korea’s 20th century history that has been marked by struggle and tragedy. And having seen the popularity and critical response to Parasite, I am not surprised that this show, which tackles similar themes of social inequality, critiques of capitalism and dire condition of the pandemic, has been really well-embraced,” she says.

Laid-off autoworker Seong Gi-Hun (Lee Jung-jae) may appear as an unforgivable, irresponsible parent, but his story strikes a raw nerve with Korean audiences, even those in more privileged positions, who may very likely know someone like Gi-Hun. “Most of the characters have exhausted their means of borrowing, so then they have to go to private lending and then finally, this kind of illegal lending through organized crime,” explains Michelle Cho, who teaches East Asian pop culture at the University of Toronto. It’s a result of inequalities in different corners of life from education, employment to housing. And it is a deeper issue that cannot be fully unpacked here — or in a nine-episode TV series.

Scoring with a purpose (Ep 1) 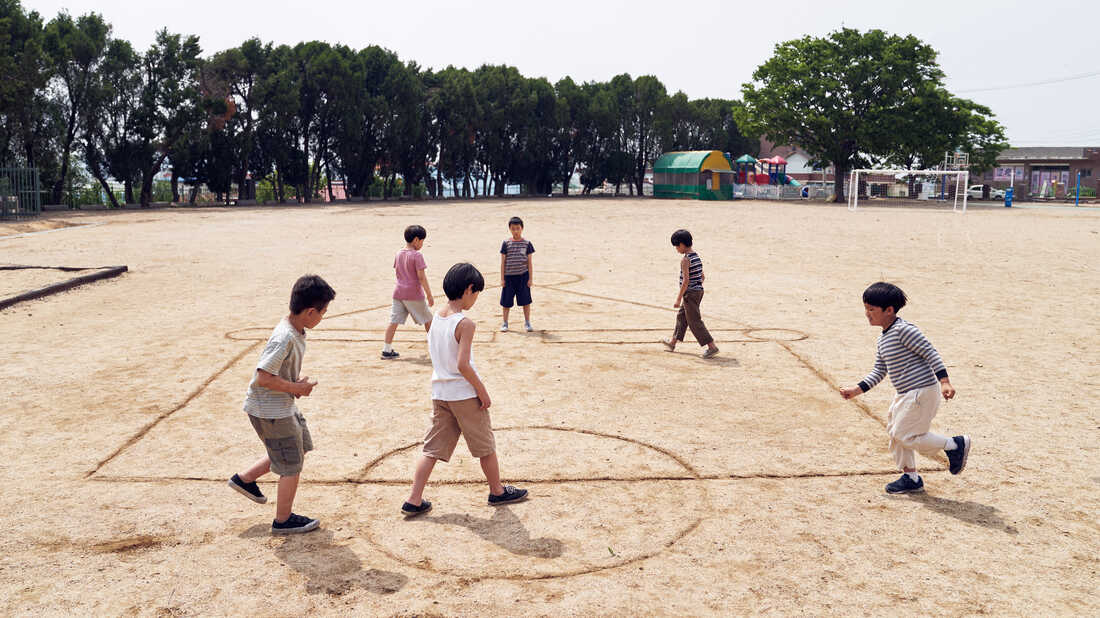 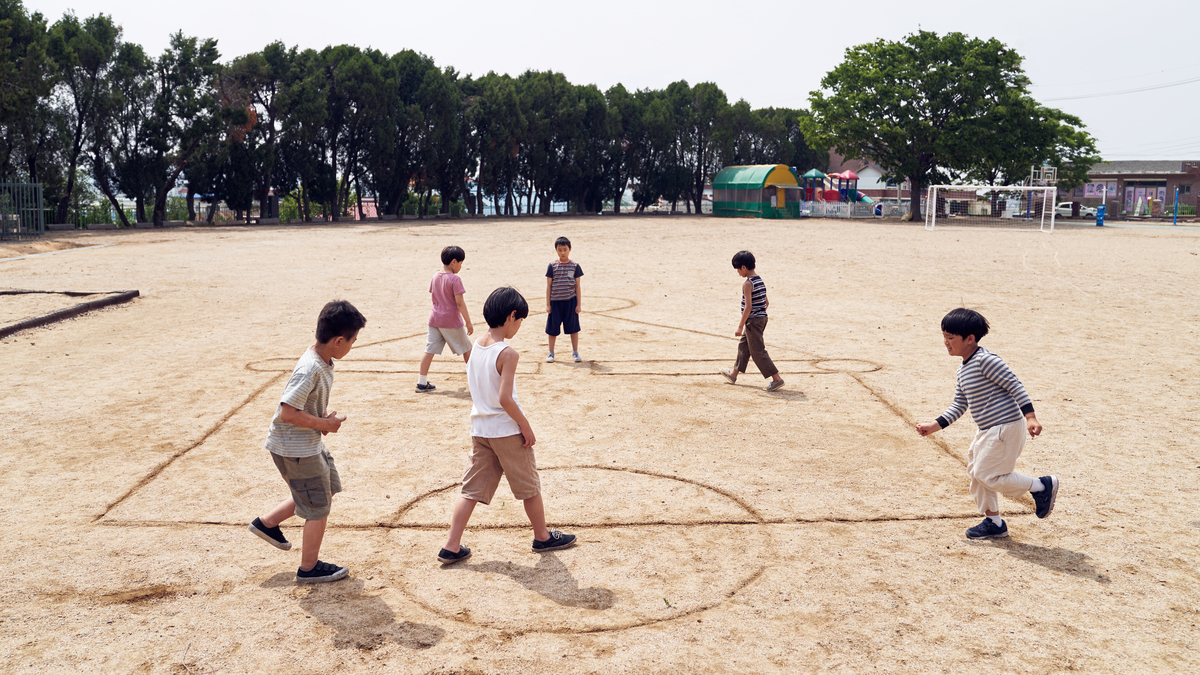 Squid Game’s meticulous scoring is not only just as striking as its visuals, but it also pays homage to sounds familiar to Korean listeners. The classical music that plays in the background when Gi-Hun is woken up in the Squid Game arena — Franz Joseph Haydn’s Trumpet Concerto — was the theme music of a quiz show for high schoolers, which pits students against one another for a chance to win a college scholarship. Composed and recorded by the series’ music director Jung Jae-il, the playful yet raw opening track was played on the recorder, an instrument taught across Korean public schools, to complement scenes of children’s games.

If episode one of Squid Game is your first-ever K-drama experience, you may have wondered, “Why is this psychopath salesman also insanely attractive?” Well, if you find yourself mesmerized by his evil smile and crisp slaps, you are late to the game. A rare treat to see in a cameo, Gong Yoo is a renowned Korean actor, best known for his performance in zombie thriller Train to Busan. If you are craving more, please watch Guardian: The Lonely and Great God, in which Gong Yoo plays a 939-year-old goblin scouring the Earth for his goblin bride — it’ll set a high bar for your Gong Yoo binge. 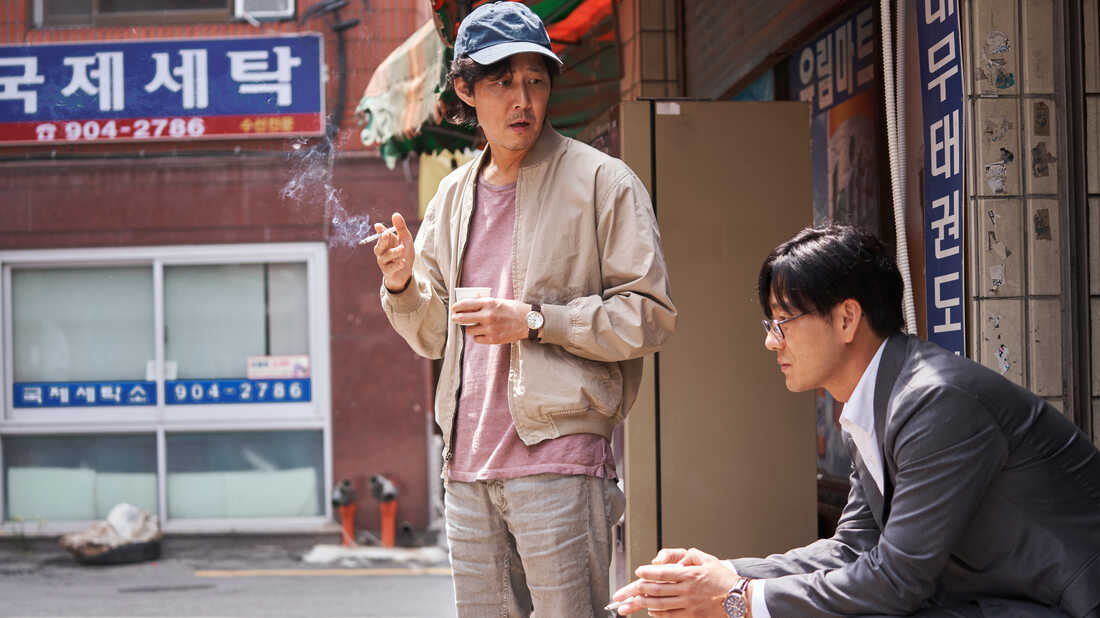 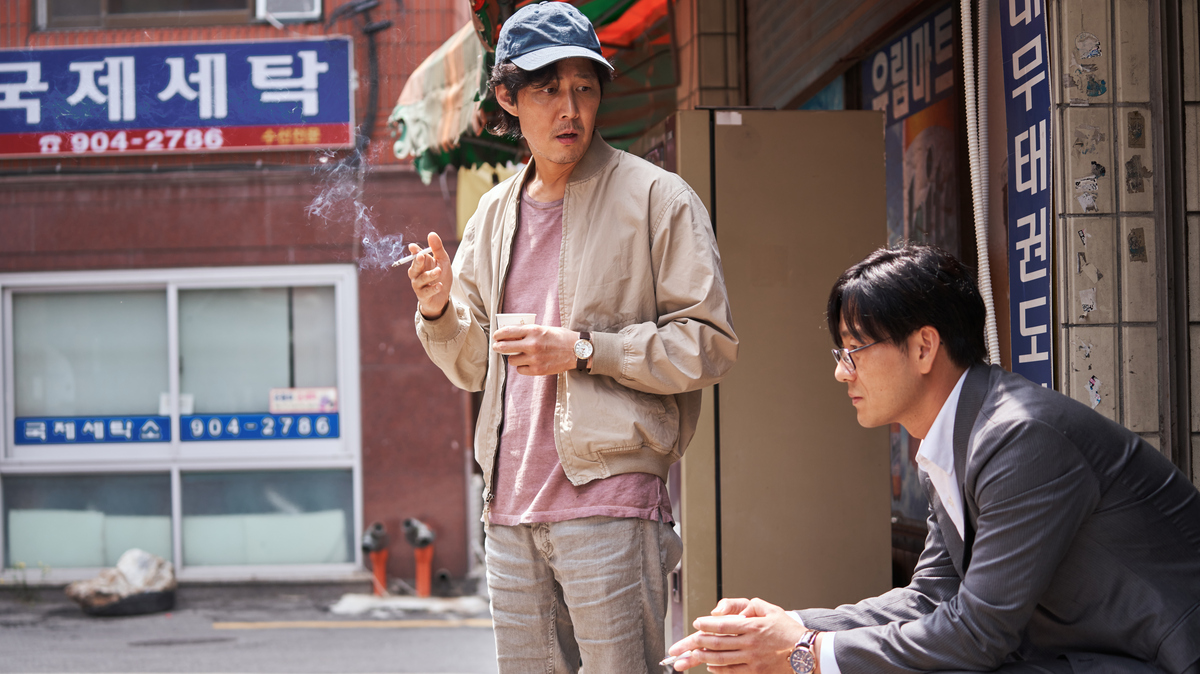 A small detail left out in translation, the scene introducing disgraced investment banker Cho Sang-woo’s (Park Hae-soo) mother reveals that her store is named Sang-woo’s Fish Store. Naming businesses after their children or family’s names is common practice among Korean corner store owners. The name reaffirms the pride Sang-woo’s mother has in him, as well as the pressure he must have felt to not let her down.

It is also worth noting that Gi-Hun and Sang-woo are childhood friends from Ssangmun-dong, one of the less developed areas in Seoul. Squid Game creator Hwang also grew up in this neighborhood, where many families still live in dingy, non-renovated homes — similar to those you see in Parasite — as opposed to the high-rise apartments that are being reconstructed across the city. To be accepted into Seoul National University, let alone to its business administration program, marks significant success for Korean high schoolers. As a standout student from a small yet tight knit community, Sang-woo likely grappled with high expectations from everyone including Gi-Hun, who still speaks proudly of Sang-woo’s academic success as a 40-something-year-old.

After he commits financial fraud and flees from the police, we see Sang-woo drenched in sweat, drinking soju in the bathtub. A key detail in this scene is the charcoal briquette that is burning in the closed bathroom: Charcoal briquettes were once widely used to heat Korean homes, but inhaling their fumes can result in death from carbon monoxide poisoning. So to put it bluntly: No, Sang-woo isn’t just getting drunk in the bath; it is a darker scene in which he tries to end his life, before he is interrupted by the doorbell. 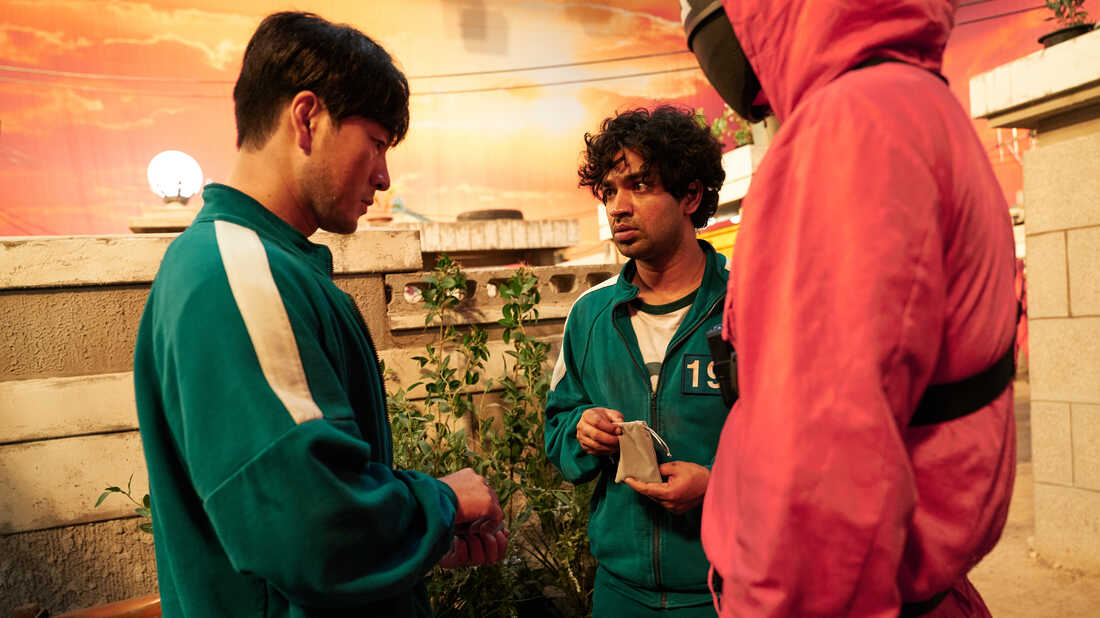 Ali and Sang-woo, whom he calls hyung, which refers to a biological brother or older male friend. Noh Juhan/Netflix hide caption 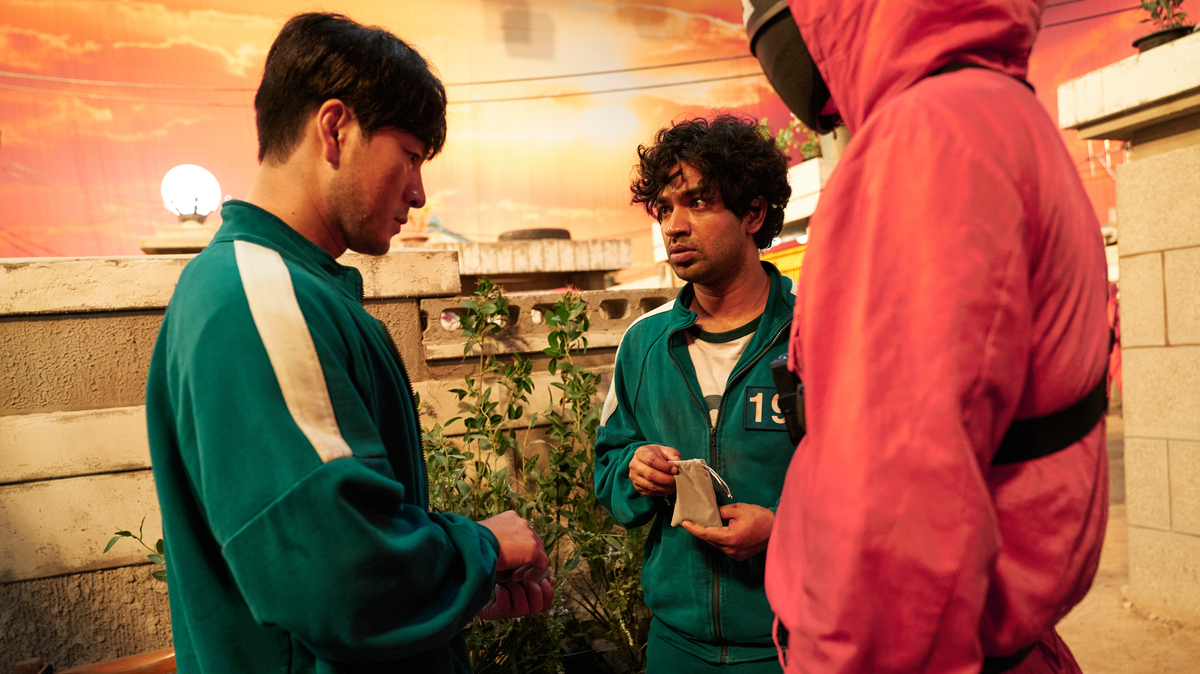 Ali and Sang-woo, whom he calls hyung, which refers to a biological brother or older male friend.

The kind-hearted Ali Abdul (Anupam Tripathi) from Pakistan stands in for many blue-collar migrant workers in South Korea, who experience racism and exploitation in the workplace. Foreign employees were first allowed into South Korea in 1993, when the country’s rapid development resulted in a dire need for labor in agriculture, construction and manufacturing. These abused industrial trainees from South and Southeast Asian countries were often left with no way to return to their home countries when employers seized their passports and legal documents.

In Squid Game, Ali initially refers to Sang-woo as sajangnim in Korean, which translates to company president. Sajangnim today is more commonly used as a title for a new acquaintance, typically an older man, as a sign of respect — kind of like calling someone “boss” in English. As someone who is at the bottom of the social ladder, Ali is soon corrected by Sang-woo, who asks to be called hyung, a title referring to a biological older brother or an older man you are friendly with. The concept of friendship has very specific qualifications in South Korea, limited to relationships between those of the same age, so Ali calling Sang-woo hyung represents the closest relationship he is likely to achieve with an older friend figure.

In response to the violent free-for-all, in which players turn on each other, Gi-Hun sees flashbacks of brutality from his life outside the games. These trancelike visions of his co-worker, which remain unexplained onscreen, are scenes depicting the 2009 Ssangyong Motors strike, which resulted in police charging into the factory and beating down protesting union members.

The 77-day strike was organized in response to the company’s profit-driven decision to lay off over 2,500 employees, or nearly half its workforce. As explained by Michelle Cho, “The story of Ssangyong Motors involves the changing ownership of the company from the Korean to Chinese to Indian ownership, so this kind of mobility of global capital and then the fact that the workers themselves are completely immobile.” 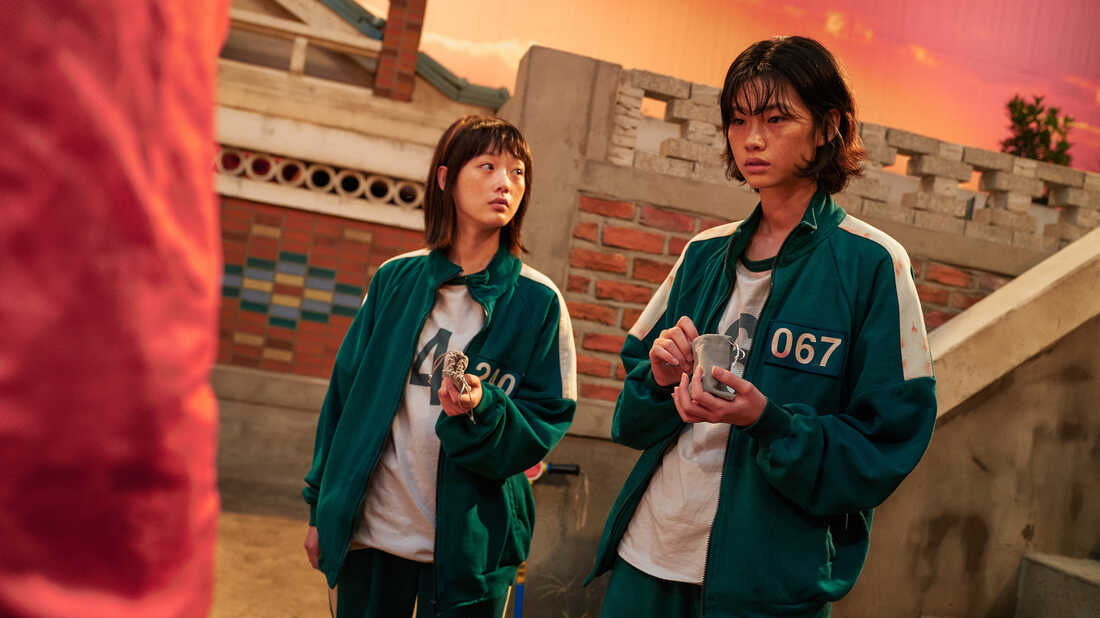 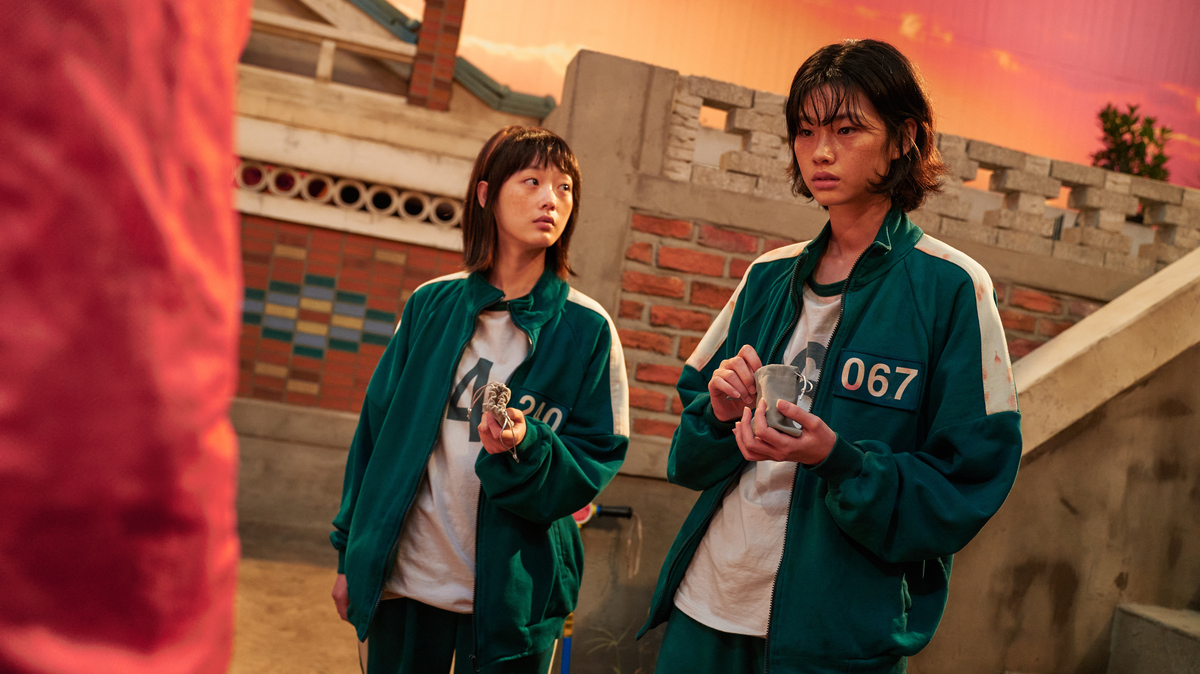 A number of players in the game compliment North Korean defector Sae-byeok’s name, which is the Korean word for dawn. Another noteworthy name is that of Sae-byeok’s optimistic foil, Ji-yeong (Lee Yoo-mi). Ji-yeong is one of the more common names among Korean women in their early 20s, which ties back to her life story as an ordinary teenager whose life was turned on its head after killing her abusive father. 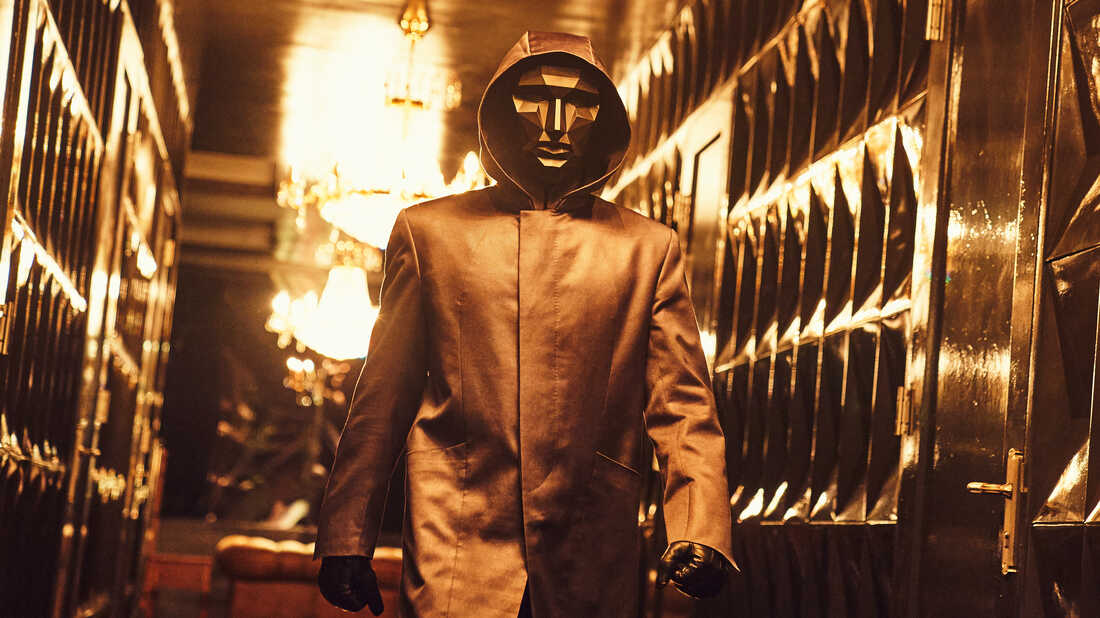 You may not see his face, but Lee Byung-hun, who plays the Front Man, is recognizable by his voice alone. Noh Juhan/Netflix hide caption 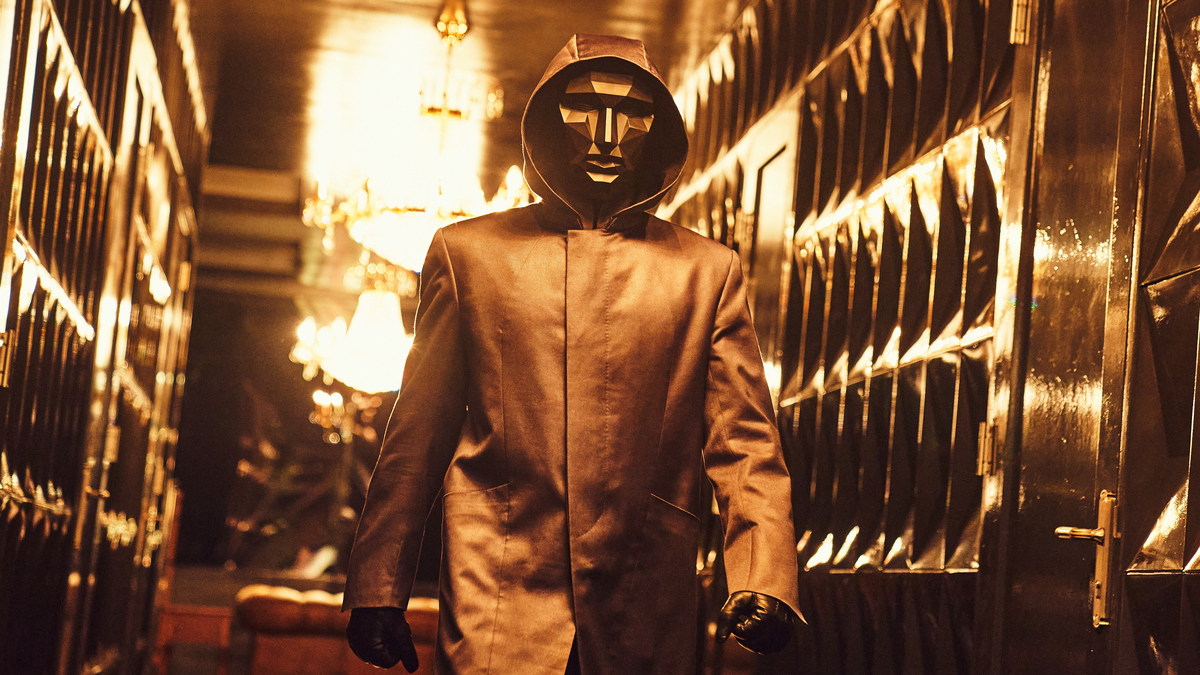 You may not see his face, but Lee Byung-hun, who plays the Front Man, is recognizable by his voice alone.

You may only see him once, but the inimitable Lee Byung-hun, who plays the Front Man, is recognizable to Korean audiences by voice alone. As a shoutout to the actor, Ji-yeong quotes Lee’s iconic line from the 2015 thriller Inside Men, saying “Let’s have a drink of Maldives in mojito” to Sae-byeok (Jung Ho-yeon) when the latter admits that she dreams of using the prize money to travel to Jeju Island with her family.