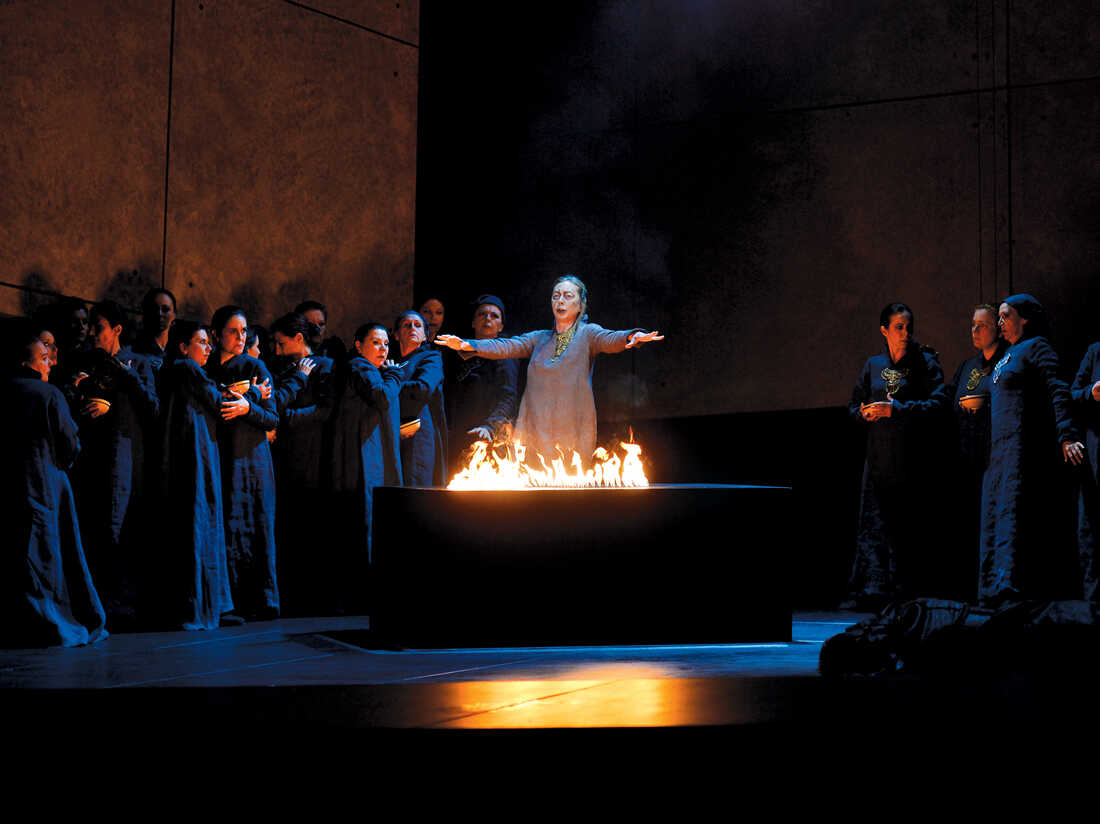 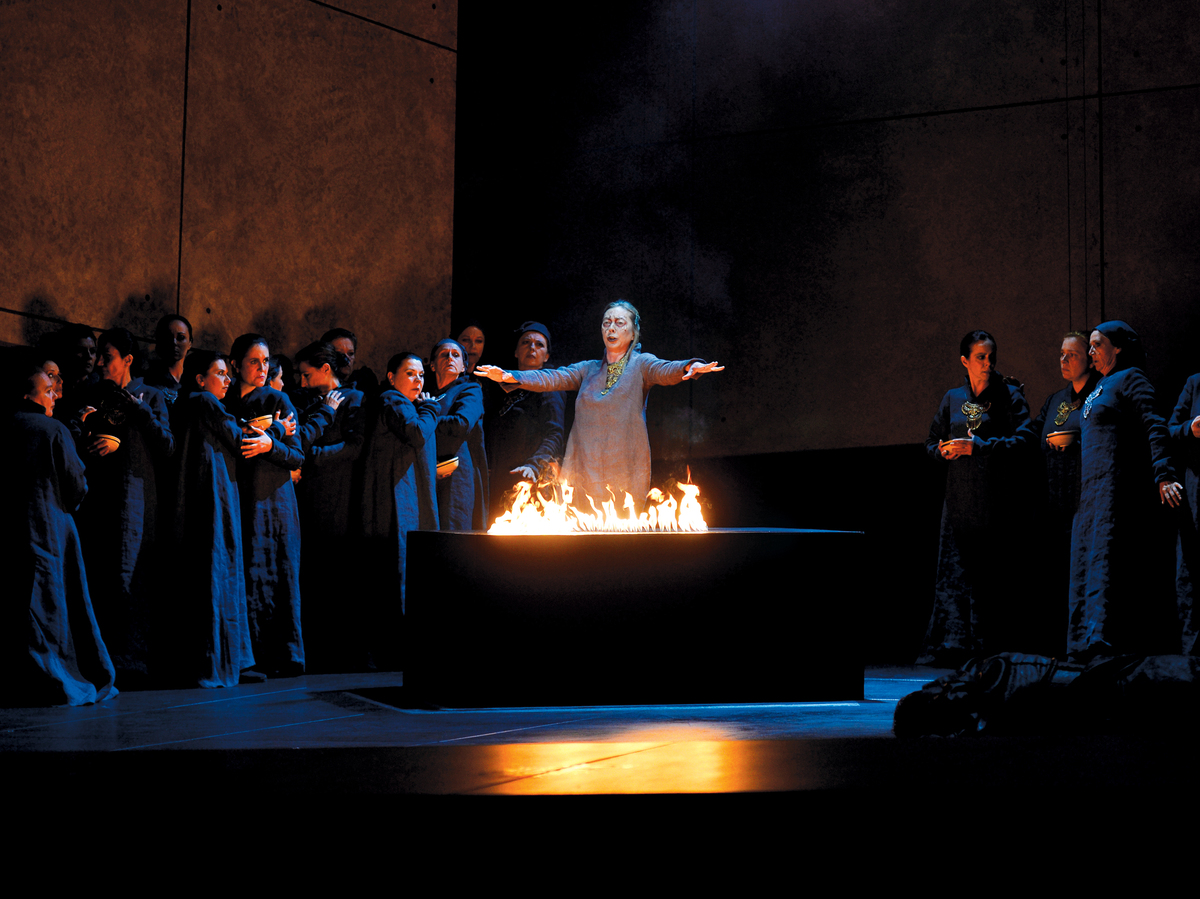 A scene from Francisco Negrin’s production of Verdi’s Il Trovatore, shown in a performance from the Opera de Monte Carlo.

Giuseppe Verdi’s opera Il Trovatore tells a story of passion, secrets and revenge. The LA Opera, due to reopen this month with a production of Verdi’s work after canceling its 2020-21 season because of the pandemic, has added its own new backstage tale of resilience.

The company rented stage sets and visual effects from the Opéra de Monte-Carlo in Monaco. The shipment was supposed to arrive in L.A. three weeks ago. But delays caused by the coronavirus pandemic have disrupted shipping supply chains, causing bottlenecks at seaports around the world. Instead of getting unloaded, the ship carrying four 40-foot containers destined for the opera company sits anchored off the port of Los Angeles.

“They were diverted back to the open ocean to wait in a line of currently something like 38 other container ships,” says Jeff Kleeman, the opera’s technical director. He says he was told the ship wouldn’t dock until next week—”which puts it well past our window of opportunity to get in into the theater, build it, light it and have it ready for opening night,” he says.

So, Kleeman says, they decided to build new sets from scratch. At the Dorothy Chandler Pavilion, carpenters, electricians and painters went to work on a tight deadline, sawing, drilling, screwing in and painting new wall panels and floor boards for the stage. 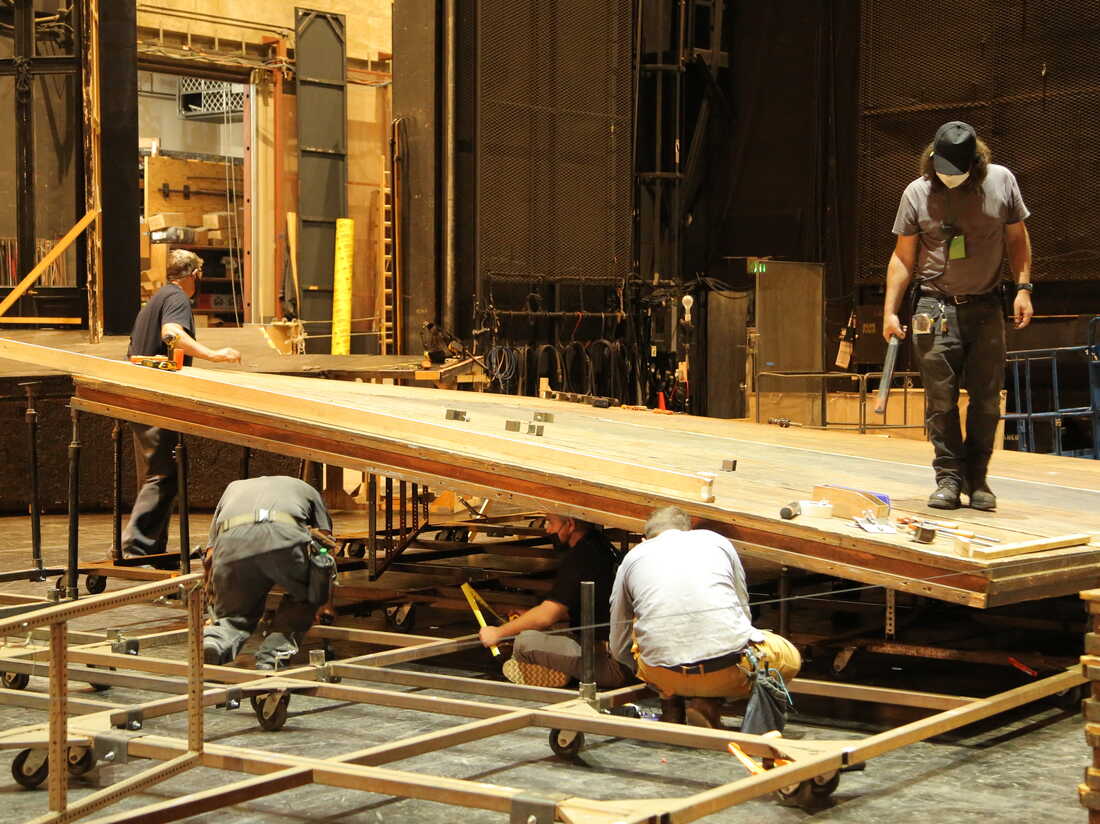 LA Opera employees have worked around the clock to complete sets for their season opener in just 10 days. Kelly Travis/courtesy of LA Opera hide caption 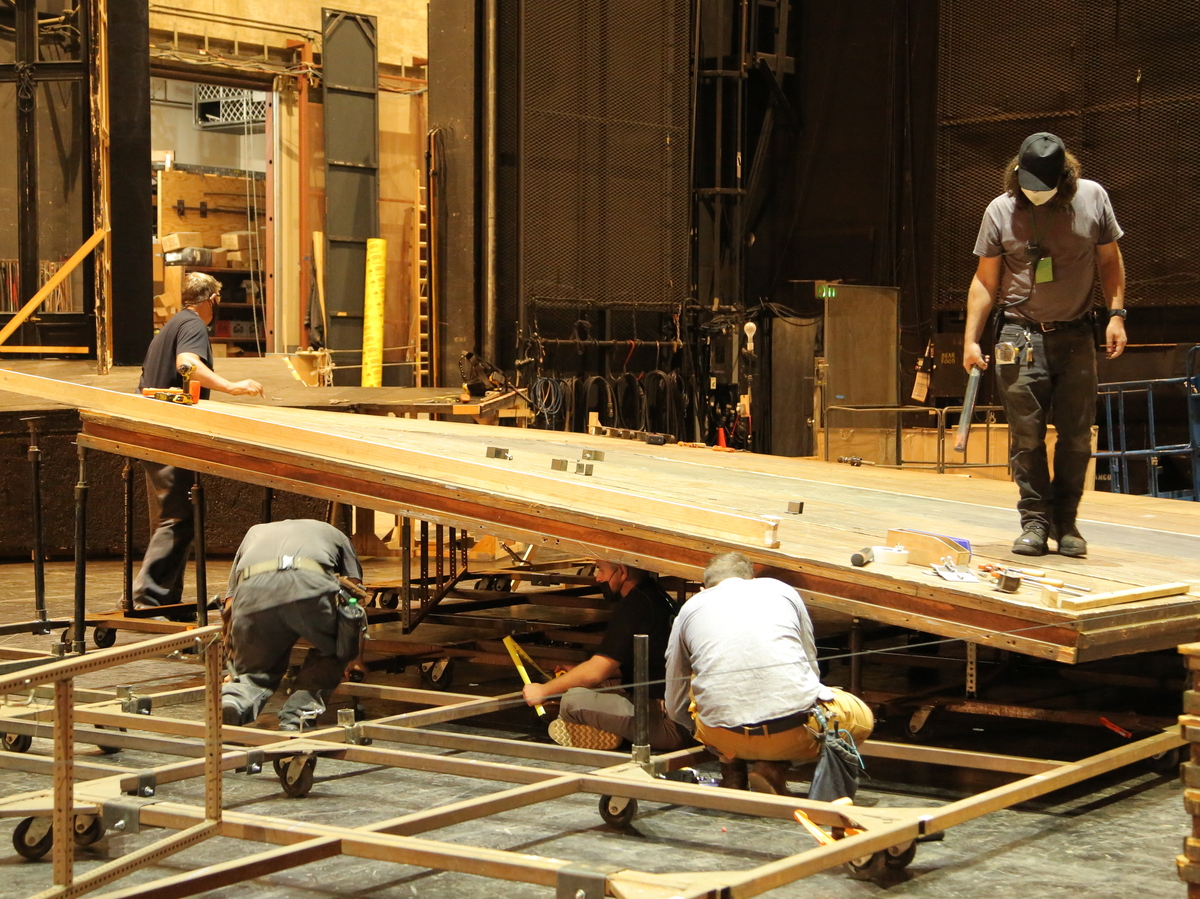 LA Opera employees have worked around the clock to complete sets for their season opener in just 10 days.

Kleeman says building their own stage sets would normally take three to six months. Here, they only have days. Now 45 workers are working 14 hours a day for ten days straight to be on schedule. While they build, the company is rehearsing the opera—including its famous “Anvil Chorus.”

Kleeman has been with the LA Opera for more than 35 years, and remembers that something similar happened when dock workers went on strike in 2002. Sets for a production of Shostakovich’s Lady Macbeth of Mtsensk were supposed to arrive from St. Petersburg, Russia.

But this time, there was a new problem to solve: LA Opera didn’t have blueprints for the Il Trovatore sets, just some rough assembly notes.

After her initial shock, design manager Carolina Angulo immediately got to work, trying to decipher a few photos and videos of the European production. “Basically, I needed to go back to the drawing board and start figuring all those pieces and modules, on how to put this together with our tools that we have in-house,” she says. “Trying to recreate what it needs to be in this space, with the materials that we work in the U.S.—because it came from Europe, it’s all in a different metric system.” 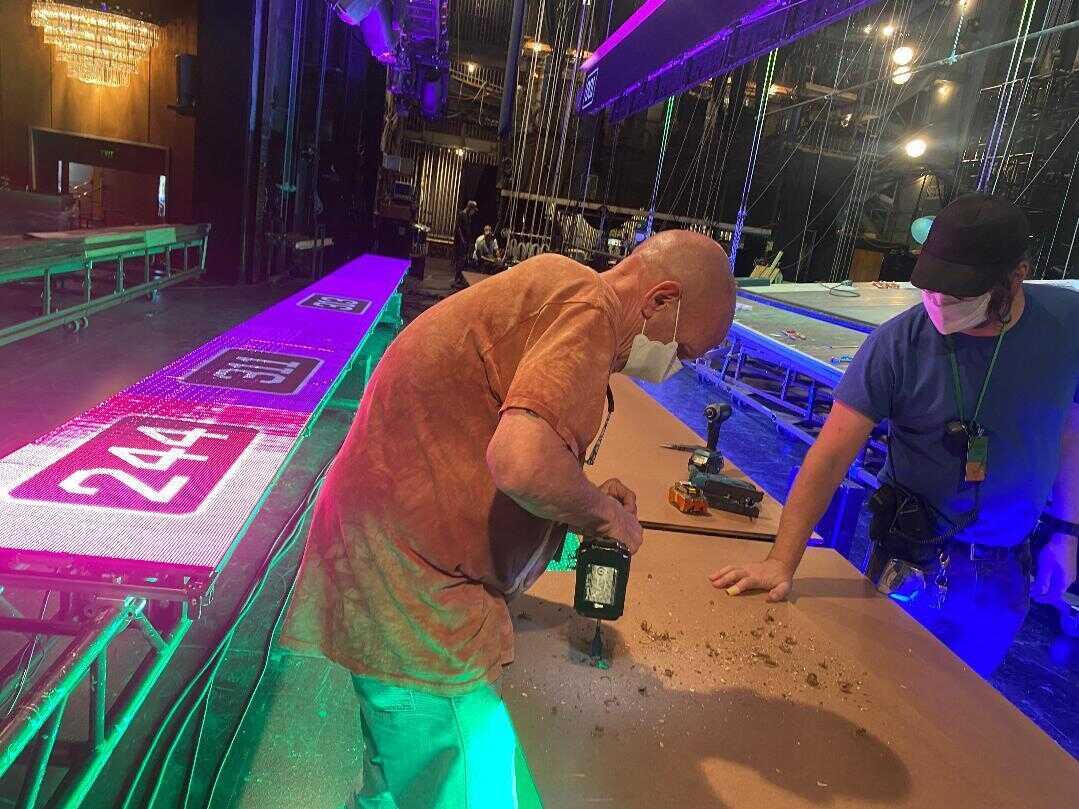 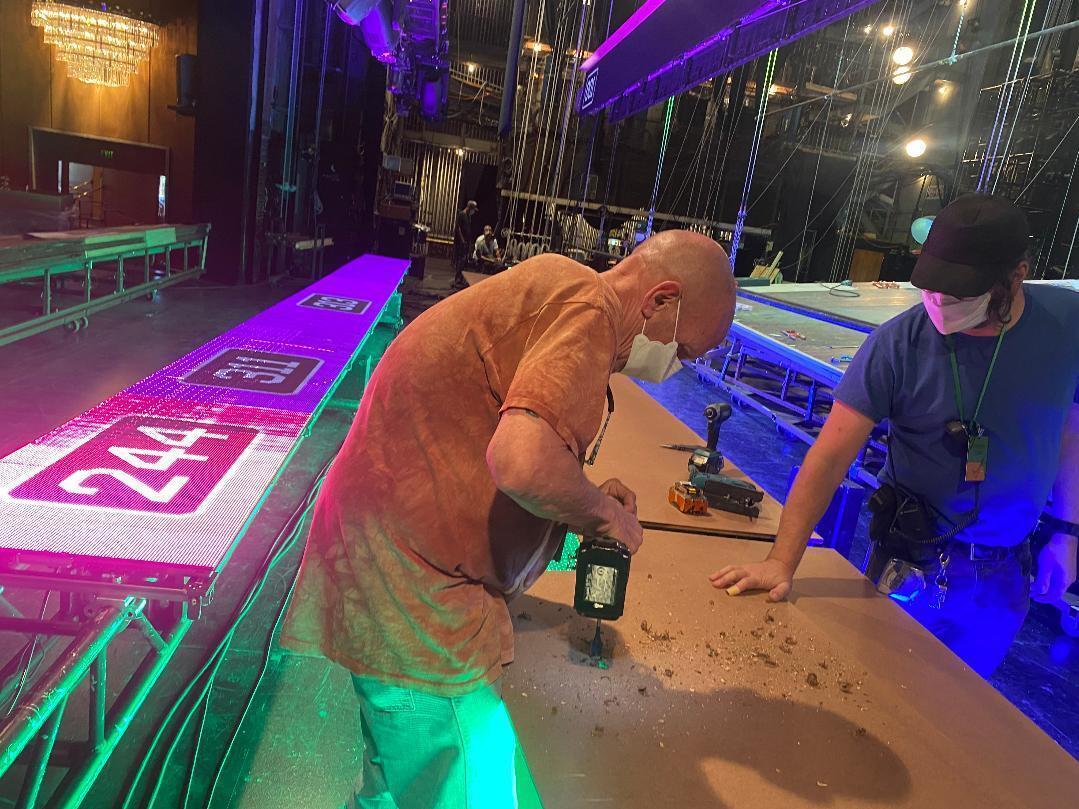 Luckily, the costumes and props arrived by air months ago. But the company still had to rent 240 feet of LED equipment for visual effects. A pyrotechnics expert is putting together propane-gas fire effects, with live flames. Angulo says she’s still working out all the details.

“I’ve been trying to generate drawings, construction drawings, at the same time that I’m supervising actual construction,” she says. “It’s been a little bit of a mad race, but that, you know, that’s what it takes. It’s also kind of the thrill of the theater, and, you know, we’re all excited to make it happen. “

The opera company had to work through various travel bans and visa issues to assemble all the players, and they’ve put COVID precautions in place. Kleeman says this last-minute construction is just one more challenge.

“Our goal here in coming back into the theater this season was to provide that recovery to the world, the healing that comes from live art,” he says. “That same drive is what caused us to very quickly pivot without really even a second thought.”

He says that when the curtains rise on September 18, they’ll be ready.