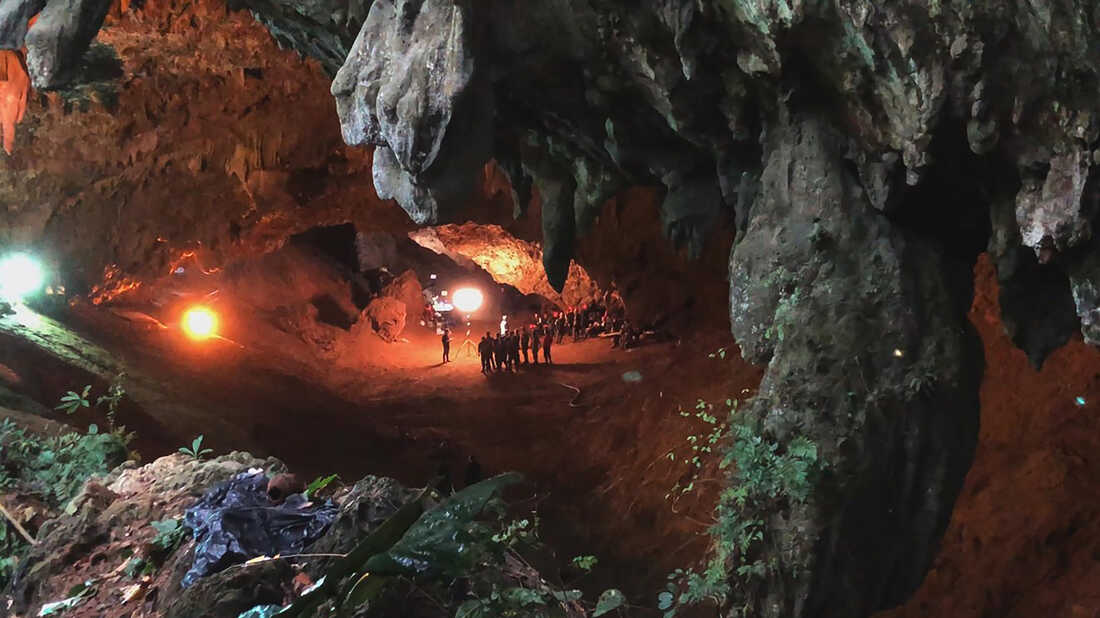 The Rescue chronicles the 2018 rescue of 12 boys and their soccer coach who were trapped deep inside a flooded cave in Northern Thailand. National Geographic hide caption 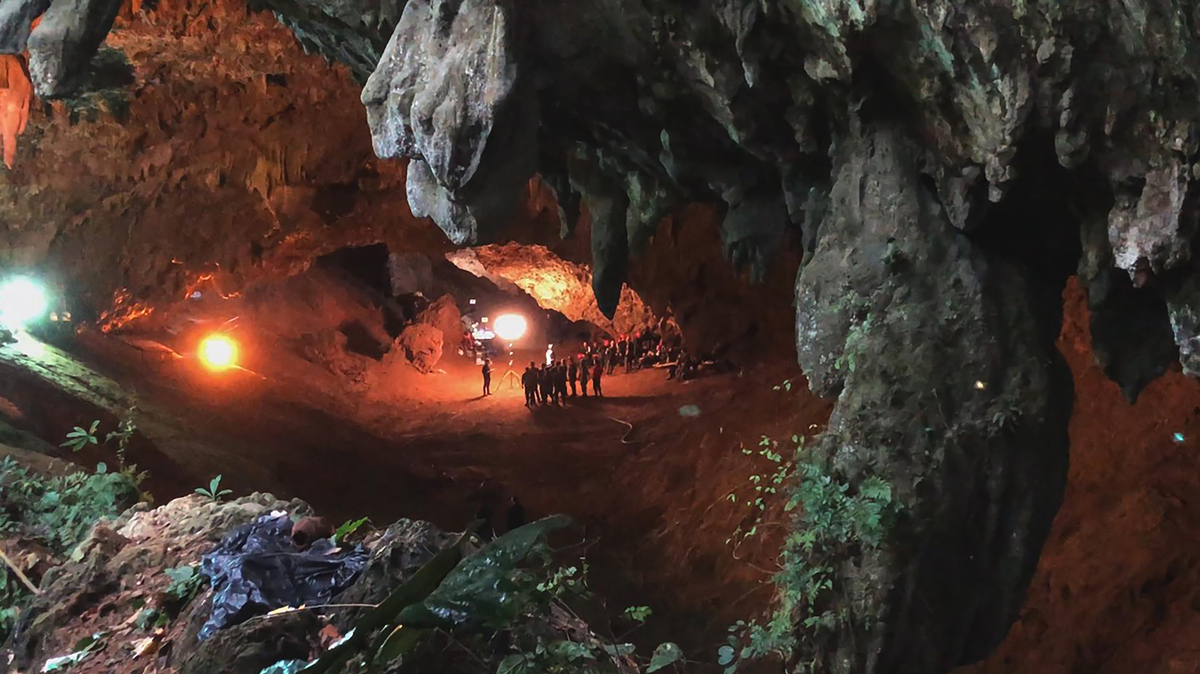 The Rescue chronicles the 2018 rescue of 12 boys and their soccer coach who were trapped deep inside a flooded cave in Northern Thailand.

In June 2018, the world held its breath for 18 days as a group of elite cave divers risked everything to rescue 12 boys and their coach from an underwater cave in Northern Thailand.

The boys, who were all members of a soccer team, had gone into a long, winding underground cave with their coach to celebrate one of the boy’s birthdays. But it was just before the beginning of the four-month monsoon season, and while they were in the cave, it started to downpour outside. Rain water rushed into the cave, trapping them deep inside.

Documentary filmmaker Chai Vasarhelyi describes the cave as incredibly intimidating, with a “a darkness that kind of pulls you in.” The boys and the coach were about two kilometers in, she says, and “trapped on the wrong side of the water.”

Vasarhelyi and her husband and co-filmmaker Jimmy Chin are the directors of the Oscar-winning documentary Free Solo. Their new film, The Rescue, tells the story of the daring underwater rescue operation in Thailand.

The Thai rescue mission presented a unique challenge. Oxygen supply was dwindling inside the cave, and any rescue would require maneuvering through tight underwater crevasses. It was difficult to know who — if anyone — would be capable of getting the boys and their coach out safely.

Rick Stanton, a retired firefighter and veteran cave diver from England, was called in to help. “When we first arrived in Thailand, the river was absolutely raging,” he says. “We could not see our hands in front of our faces [underwater inside the cave].”

Stanton remembers swimming through the cave blindly, not knowing if the boys and their coach were still alive. It was over a two hour swim from the entrance, and at one point, he and a fellow diver surfaced — and that’s when he heard them.

“We heard other voices and then we saw a light, and then they came into view,” Stanton says. “And despite our pessimistic thoughts, they all were ambulant. … That iconic footage is exactly as it happened in real time.”

The filmmakers and diver spoke about how an expert team of cave divers, Thai Navy SEALs and an international group of special service members and volunteers pulled off the harrowing mission and got all 12 boys and their coach to safety.

On everyone racing against the clock

Vasarhelyi: It was a ticking clock. … You were racing against time, because at any moment the rains could start again and there would be a point where the divers couldn’t proceed any further because of too strong of a current. And likewise, they also realized that the air quality in the cave was very low in oxygen. I think they measured [oxygen levels] at 15.6 [percent]. And, you know, firefighters won’t go inside a building if the oxygen meter reads anything below 18 [percent].

On the moment the first divers found the boys

Stanton: They were all very stoic. They walked down, crouched on their haunches in front of us. … I was actually counting them as they came around the corner into view. So just as [fellow diver John Volanthen] asked, “How many of you are there?” You hear me say in the background [saying], “They’re all alive.” And, for us, that was quite miraculous, considering what we were expecting to possibly find. But as amazing a moment is that was, I think both John and I immediately moved on to the next step: OK, they’re here, but I’ve absolutely no idea how we can get them out. That underwater journey in those conditions is beyond their ability. And I thought beyond our abilities to be able to bring them out at that point.

On the decision by fellow rescuer (and anesthesiologist) Dr. Richard Harris to sedate the boys in order to get them out safely

Vasarhelyi: Here was an impossible situation: The rains would come any day and they were running out of air and there was really no other option. And I think that what moves me in particular about the story was the absolute morality that Rick [Stanton] and Dr. Harris and John Volanthen demonstrate. This was a terrible idea. They really thought that saving one child would be a success. And they were willing to take that risk for that reason. One life was worth it. And then it just always chokes me up, because I have so much respect and admiration for that idea that if you’re the only person in the world who can do something, is that your responsibility or not? And Rick, John and Dr. Harris rose to that challenge at great personal risk.

There’s so many layers and levels of how much they had to lose. And yet they move forward with this plan.

Chin: They really had everything to lose, and they still chose to do it. … Public opinion could turn. It was being scrutinized by the entire global community, right? And so, particularly if you’re a doctor and anesthesiologist, if you’re going to go ahead and do this and the kids die, you’re going to be known as the anesthesiologist that killed these kids. There’s so many layers and levels of how much they had to lose. And yet they move forward with this plan.

On divers administering the sedatives

Stanton: Dr. Richard Harris did administer the first set of sedatives on the boys, but it was a two and a half hour journey out, at least, maybe three in cases, and the sedative only lasted about 40 minutes. So we were trained — I say “trained,” we had a five minute instruction — on how to inject the boys, assess their depth of sedation and inject them with more sedative. And so that was part of the crucial plan that was put on to us as we were diving out, we would have to perform this procedure. 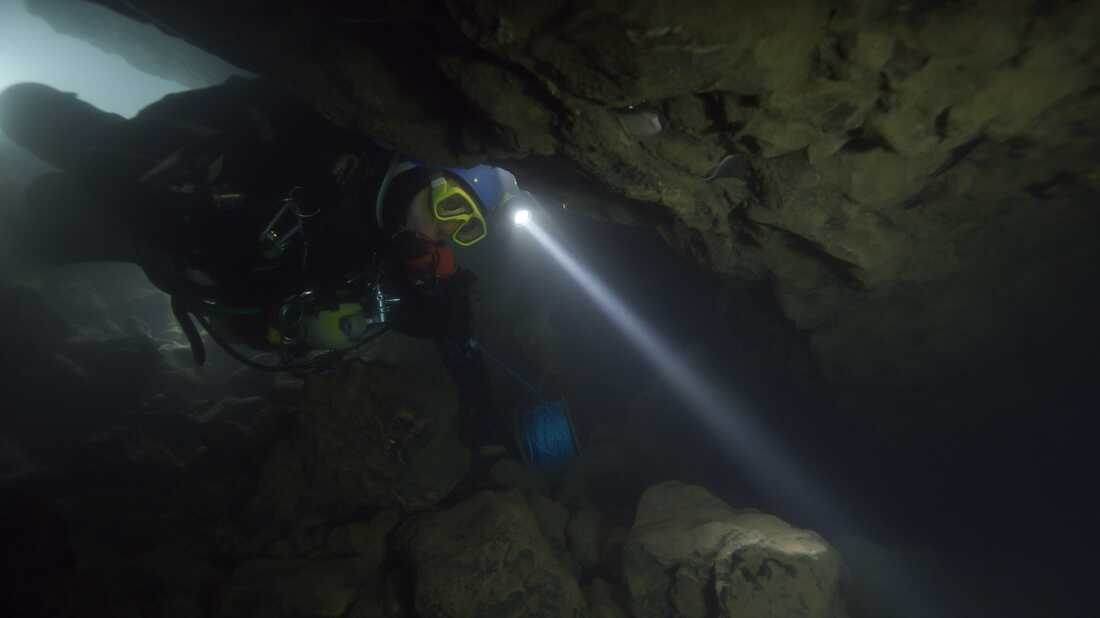 Rescue divers could barely see in front of their faces while searching the cave underwater for the 12 boys and their coach. Isaac Davidson /National Geographic hide caption 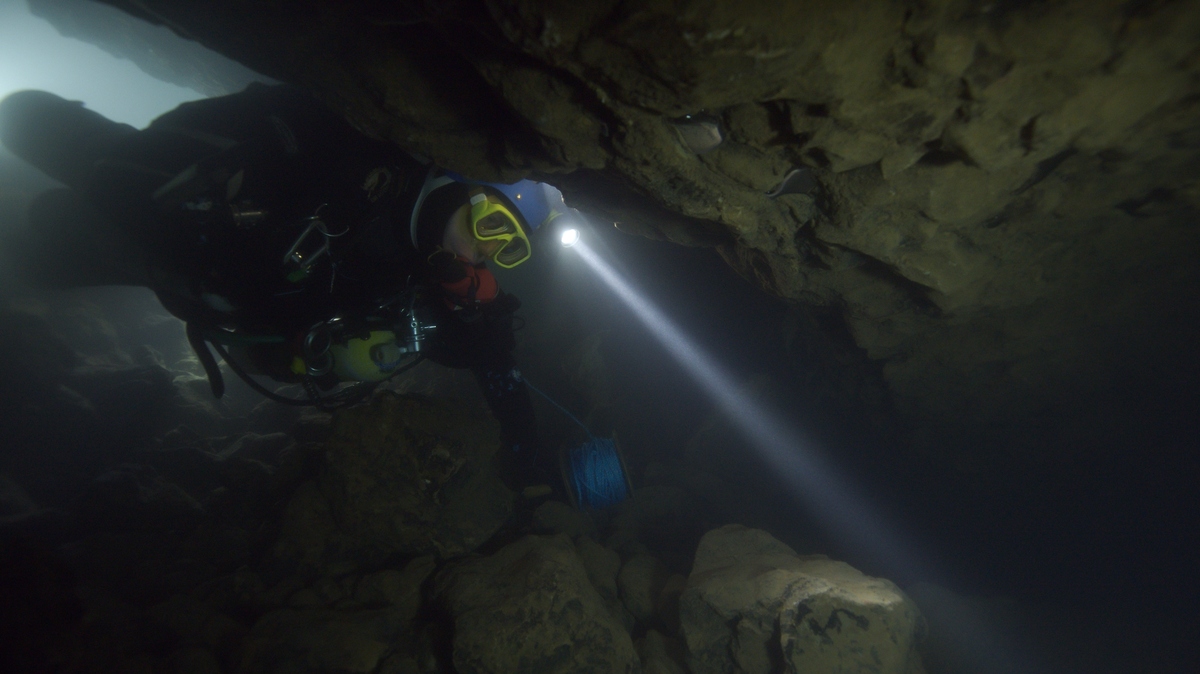 Rescue divers could barely see in front of their faces while searching the cave underwater for the 12 boys and their coach.

Stanton: The crucial thing was the seal of their mouth and nose against the water. So we elected to have full face masks on them that actually maintained an internal pressure. So any leak would be outwards rather than water inwards. … The integrity of that mask, too, was the most important factor. Unlike most scuba divers who have the cylinders on the back, we elected to have the cylinders on the front and that acted as a way to them and kept them face down, which helped maintain their airway and made sure that no water would be aspirated upwards into the throat.

On pushing the boys through tiny underwater cracks

Stanton: I describe it as a sort of letterbox that you had to post the child through. You couldn’t see where the slot was. And you had to post the child through it by basically using the child as a feeling gauge, to find where the appropriate fit was and then follow through behind. And of course, all the time, you can’t actually see their face unless you go really close to them. You don’t know what’s going on with that all important face mask seal. Sometimes you couldn’t even hear their breathing, so you had to sometimes just stop and take a reality check to see that they were actually still alive.

On getting each boy to safety, one at a time

Stanton: That was amazing. The relief was enormous. … But of course, you have to remember that … one day of success didn’t mean to say the next day or the day after was going to be an equal success. The probability of something going wrong was enormous, and so there was absolutely no room for complacency in this rescue. …

We were uniquely placed to understand the situation and to put forward the rescue. So that was a huge responsibility. And from that moment when I came out of the cave having found them, I completely changed. All my efforts were directed towards the rescue and saving those boys.

This is a very strange hobby, which we’ve really pursued for 40 years, just for our own perverse enjoyment and pleasure, and what really brought home to me is how so suddenly it all became worthwhile. And then this obscure sideline hobby that no one could understand or vocalize all came good and was a huge benefit to those 13 young lives, and done on a world stage. So I’m hugely proud of that event and the fact that my life almost, you could say, led to that point. All decisions that I had made led towards that one circumstance.

Vasarhelyi: We’d been told by Rick and John that they were given GoPros by the Thai Navy SEALs, but no one had seen the images, so it triggered this two year quest to collaborate with the Thai Navy SEALs to try to get access to their footage and also to include their point of view in the story, because they clearly played a very important role as well. There are some things that can be achieved in a pandemic and there are some things that can’t. And trying to forge this relationship and build trust over Zoom really didn’t work.

When I got my second vaccine, I got on a plane to Thailand, and we approached the Thai Navy SEALs again and again, and they finally said, yes. And what we were anticipating [was] maybe 90 minutes, maybe a few usable shots. [But] they had 87 hours of footage and it was extraordinary.

Lauren Krenzel and Thea Chaloner produced and edited this interview for broadcast. Bridget Bentz, Molly Seavy-Nesper and Natalie Escobar adapted it for the web.