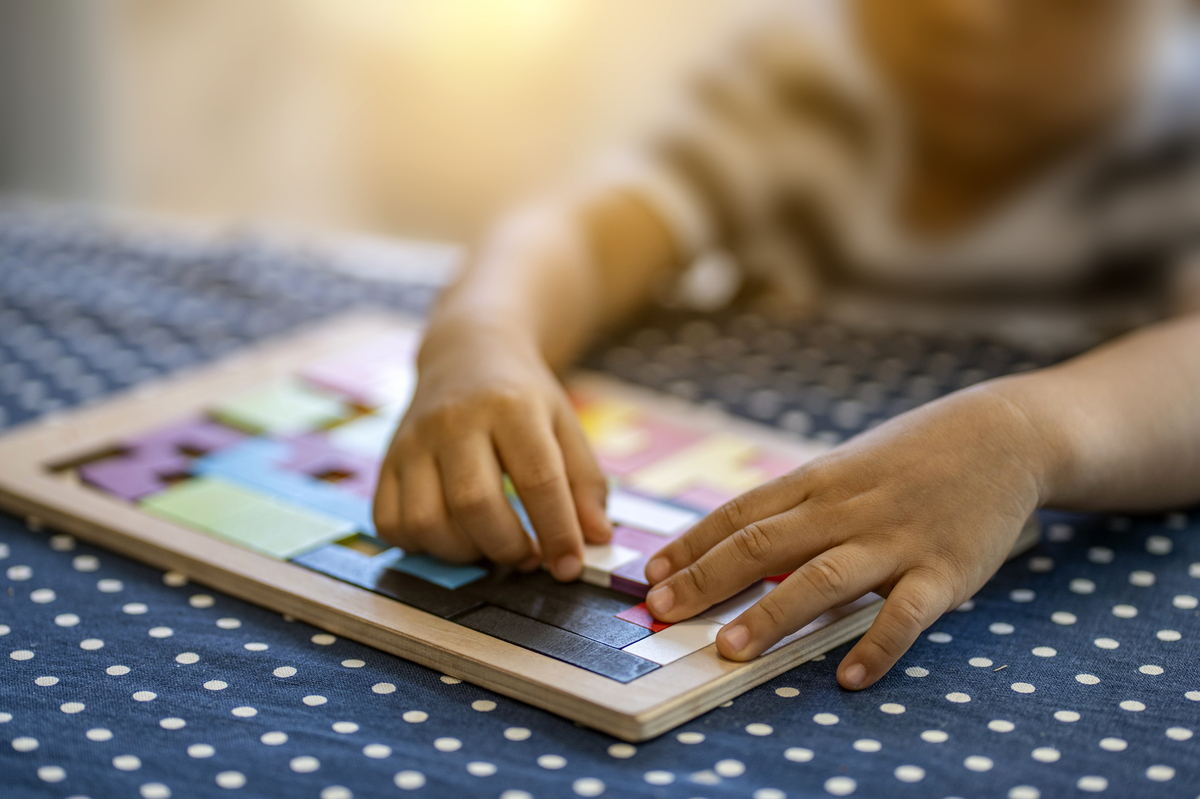 A child plays with colorful plastic blocks. Children in need of quality childcare is in high demand but short supply, including for disabled children, parents say.

Eric Stobbart tried for three months to put his 3-year-old son with autism and epilepsy into a child-care program. Every center turned his son away.

“Center-based day cares for basically your typical child would either turn him away because of his epilepsy or because of his autism,” says Stobbart, who lives in Foxborough, Mass.

Stobbart became a single father in July, causing him to seek care for his two sons. He had no problem finding a daycare for his 1-year-old, but his oldest requires more support. Stobbart even reached out to Applied Behavioral Analysis (ABA) providers, who use behavioral interventions on children with autism. But they were turned down from four centers because of the epilepsy.

Stobbart’s last chance was to try a home child-care provider. That was also unsuccessful. Stobbart says some caregivers would start the process, meet his son, and then wouldn’t take on the role.

“There’s others who wouldn’t back out, but their rates were $50 to $70 an hour, which just doesn’t make sense for me to work at that point,” he says

Ellen Taverna, public policy director at The Arc Massachusetts, says this is a common experience. It’s difficult to find a child-care center that is affordable, accessible, and has providers with the proper training for a specific child’s needs.

Many times it forces one or both parents to reduce their work hours or leave the workforce, she says.

Stobbart was lucky that his son started public preschool in September and was finally accepted to an ABA center. But if it wasn’t for his parents, he still wouldn’t be able to work. Both are in their 70s and are taking care of his 3-year-old 3 to 4 hours a day. This is on top of his son already receiving care from two different services.

“Even beyond the pandemic, it’s difficult early on to navigate the system,” Taverna says, “so having a preschool available that would help support children with disabilities is so important.”

In a proposal being debated in Congress, states would be required to have accessible and inclusive preschool programs for children with disabilities. It would also create universal pre-kindergarten, subsidize child care, and provide some level of paid family leave (the 12-week proposal, may go to four weeks). Biden’s $3.5 trillion proposal is being significantly reduced. The Democratic Party has no votes to spare and is facing self-imposed pressures to reach an agreement this week.

Rasheed Malik, associate director of research of Early Childhood Policy at American Progress, says the program would prioritize early childhood interventions that are important for development of young children with disabilities.

Malik says most families spend between 10 percent to 20 percent on child care, and in some cases even more. This legislation would create more opportunities for families who have been left out of the system for so long.

“For a very long time now child care has really only been affordable for the richest and those with the most privilege,” Malik says. “The sad truth is that on the other side of that, early childhood educators have some of the lowest wages of all professions in the United States.”

According to the U.S Bureau of Labor, the median hourly wage for a child care worker is $12.24 an hour, with an annual salary of $25,460. This has led to less people working in the child care industry.

Stobbart felt the lack of child care workers over the summer. His son was scheduled to receive 40 hours a week of ABA therapy treatment. Instead, he was lucky if they had enough to handle 20.

Stobbart says there are also ABA centers for children to go in-person but the waitlist can last several months. He requested a center in the beginning of July. His son finally got a spot in mid-September, but for just 3 hours a day.

Maura Sullivan has two sons with autism. Her sons’ disabilities require full-time care for daily activities. The shortage of caregivers has left many families taking on the role themselves.

“I was home with [my sons] during the pandemic, and we went from having a lot of support through their school systems to having no support,” she says. “What I saw was pretty extreme regression.”

It was difficult between Sullivan and her daughter to provide the same one-on-one support. She was hopeful the therapist and home caregivers would return now that her sons are back in school. But they never did.

“People are not coming back to these jobs and so it ends up cutting my workdays short to be home,” Sullivan says. “We do much less accessing anything in our community so what is happening is just continued isolation.”

Sullivan says there needs to be more services for children to grow the skills they need to be independent adults. Families can’t do it on their own, she says.

“I call it almost love work because we love to take care of our kids, but we don’t have the support,” she says. “And we really need those supports because we’re in this for the long run.”

Camila Beiner is an NPR intern.