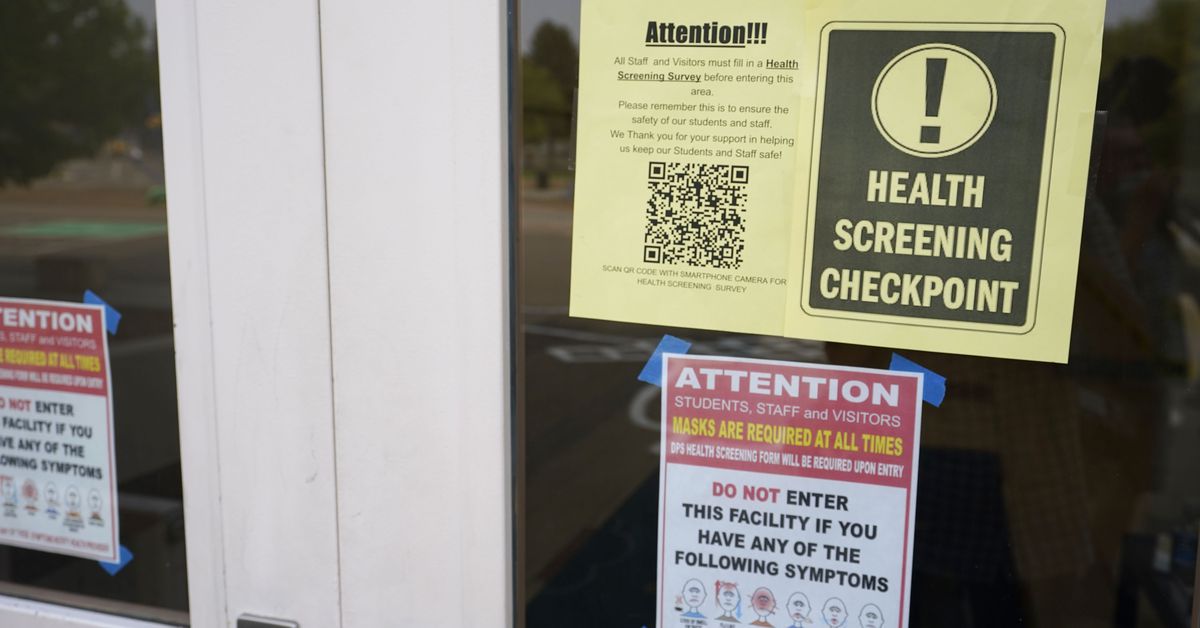 Hundreds of students in dozens of schools around the state have had to quarantine and abruptly switch to online learning, many shortly after returning to the classroom.

But state public health officials so far have identified just five outbreaks in K-12 schools since students returned in August.

This week, four K-12 schools, three of them new, appear on the active outbreak list:

Colorado is one of at least 15 states releasing data on outbreaks in schools, according to a tally by NBC News. Some states don’t share this information due to privacy concerns, and others don’t name the schools or numbers of students and staff affected. The state doesn’t track individual cases of COVID among school staff and students.

It can take time to determine whether an outbreak has occurred. For example, Douglas County School District announced on Aug. 23 that someone at Sand Creek had tested positive for COVID. Sixth-grade students were sent home to quarantine. An outbreak at Sand Creek was not confirmed until Aug. 27, and the school didn’t appear on the state list until Sept. 2.

An outbreak represents a situation in which COVID has been transmitted from one person to another in a particular setting, not just a site where a person with COVID happened to be present. Schools with more recent cases could show up on the outbreak list in the future.

An outbreak is defined as:

Cohorts are groups of students and staff that interact only with each other, and it’s one of the strategies state officials suggest schools use to contain COVID. But many districts have struggled to create small cohorts, especially at the secondary level, leading to larger quarantines.

Even if two people in the same school test positive within 14 days, officials might not consider it an outbreak, for example, if they were siblings or if they were in different cohorts and there was no evidence they had contact with each other.

And the state’s data only shows transmission in a facility or institution. It wouldn’t show whether a student or teacher infected another family member.

Colorado is in the midst of an experiment in whether it can hold school in-person during a pandemic without further spreading the disease in the community.

The state quarantine guidance for schools calls for people in the same classroom as someone who tested positive, as well as other close contacts, to stay home for 14 days. In some cases, they could return if they tested negative.

Over time, the state outbreak data will provide a picture — with its own limitations — of whether schools can contain the spread of COVID within their walls.

Daniel Dougherty, a spokesman for Eagle County Schools, said the cases at Battle Mountain High School represent the system working, even though they constitute an outbreak. One staff member developed symptoms over the weekend, called in sick on a Monday, and then tested positive.

The staff member worked with contact tracers to identify two coworkers they ate lunch with. Those two staff members also stayed home. One developed symptoms and later tested positive, while the other did not.

“All in all, it went according to plan: keep the ill out of school (stay home if sick), rapidly remove the symptomatic from public circulation (self-isolate/quarantine), get tested, contact trace, remove others who had close contact (closer than 6 feet apart for more than 15 minutes), and thus contain the spread,” Dougherty wrote in an email.

Recent cases of COVID in Colorado schools include:

How Personalized Coaching Can Kick-Start Your School’s PD