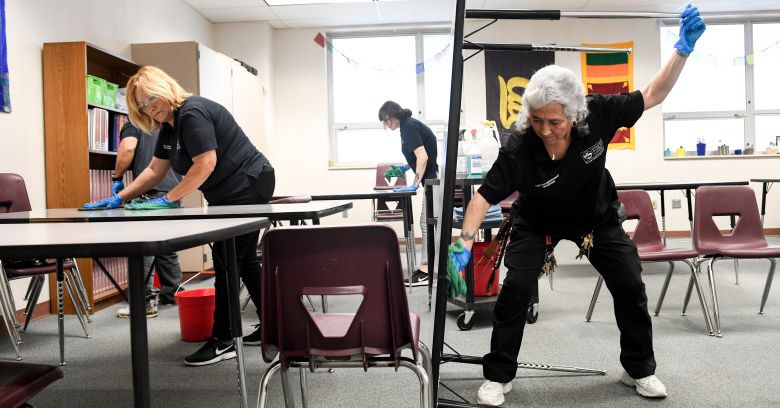 “School districts are doing so much more than we have ever asked them to do before,” said state Sen. Rachel Zenzinger, an Arvada Democrat and incoming chair of the Senate Education Committee. “Now is not the time to claw back money and introduce more uncertainty.”

The reassurances come as Congress is set to approve a new federal coronavirus relief package that would send more than $50 billion to school districts nationwide. Colorado school leaders have said they will need more money to safely reopen and to maintain remote learning options through the spring.

Colorado school districts reported a 3.3% overall enrollment decline this year, as well as decreases in the number of students eligible for subsidized lunches, a measure of poverty. Both numbers influence school funding.

Colorado lawmakers set school funding levels in the spring based on estimates and then adjust them early in the following calendar year based on actual enrollment and local property tax collections. This can mean more or less money for school districts in the middle of a school year.

This year, legislative analysts say the state owes school districts $121 million less than budgeted based on the enrollment decline, though some of that cut is offset by a reduction in local property tax revenue that the state backfills. Taken together, Colorado would send $83 million less to Colorado school districts for the 2020-21 school year — a 2% reduction — if lawmakers take the standard approach.

School leaders have raised concerns about the accuracy of this year’s count, which is based on student attendance in early October. Some superintendents said they’ve seen students who tried online options or home schooling return after what’s known as count day. In particular, despite the state numbers, officials don’t believe that fewer students are living in poverty, given widespread job losses. Instead, they believe fewer families filled out necessary forms.

Regardless, midyear budget changes would have been hard for school districts to absorb, said Bret Miles, head of the Colorado Association of School Executives, which represents superintendents.

“At this point in the year, you’ve already locked in many of your ongoing costs and you’ve already made many of your larger one-time purchases. There is not much flexibility,” Miles said. “It would have meant deficit spending. They’re not going to cut personnel when everyone feels shorthanded and is having to step away from their regular duties to do contact tracing and find students.”

Zenzinger said there’s every reason to believe school districts will be serving more students in January than were counted in October and that it will cost more to educate them than in normal years. She plans to introduce legislation that would hold school funding steady for this fiscal year.

Incoming Speaker of the House Alec Garnett, a Denver Democrat, said he believes the bill will get widespread support.

“Changing course midyear is always challenging, but it’s even more challenging in the midst of a 100-year health pandemic,” Garnett said. “Districts are having to deal with more things than they ever have before.”

Republicans introduced a similar measure during the recent special session. Democrats rejected it as outside the narrow purview of the special session. Garnett said the timing is better now that lawmakers have access to enrollment figures and a more optimistic December forecast.

School districts this year are already operating with constrained budgets. Facing dire economic forecasts in the midst of the spring lockdown, lawmakers cut K-12 spending about 15% and per-pupil spending about 5%. Gov. Jared Polis gave schools more than $500 million in extra federal coronavirus relief money, but it had to be spent by the end of this month on needs directly related to the pandemic.

While the long-term economic fallout of the pandemic response remains to be seen, the short-term impact turned out to be less severe than anticipated. Both the September and December forecast prepared by state economists found higher-than-expected tax revenues.

Based on the strength of those forecasts, Polis’ proposed 2021-22 budget would restore all the cuts made this school year, though some lawmakers on the Joint Budget Committee have raised concerns about the sustainability of increased school spending.

“We’ve heard that K-12 is a priority, that keeping schools open for in-person learning is a priority,” Miles said. “There is no reason that K-12 schools shouldn’t be a priority in the budget.”

How to Redesign Our Educational System for Lifelong Learning

How to Redesign Our Educational System for Lifelong Learning

Do schools spread COVID? It may depend on how bad things already are around them

What Art Teachers Have Learned from Teaching in 2020

Schools Will Never Return to Business as Usual. Here’s How They Can Make the Most of Our New Reality.