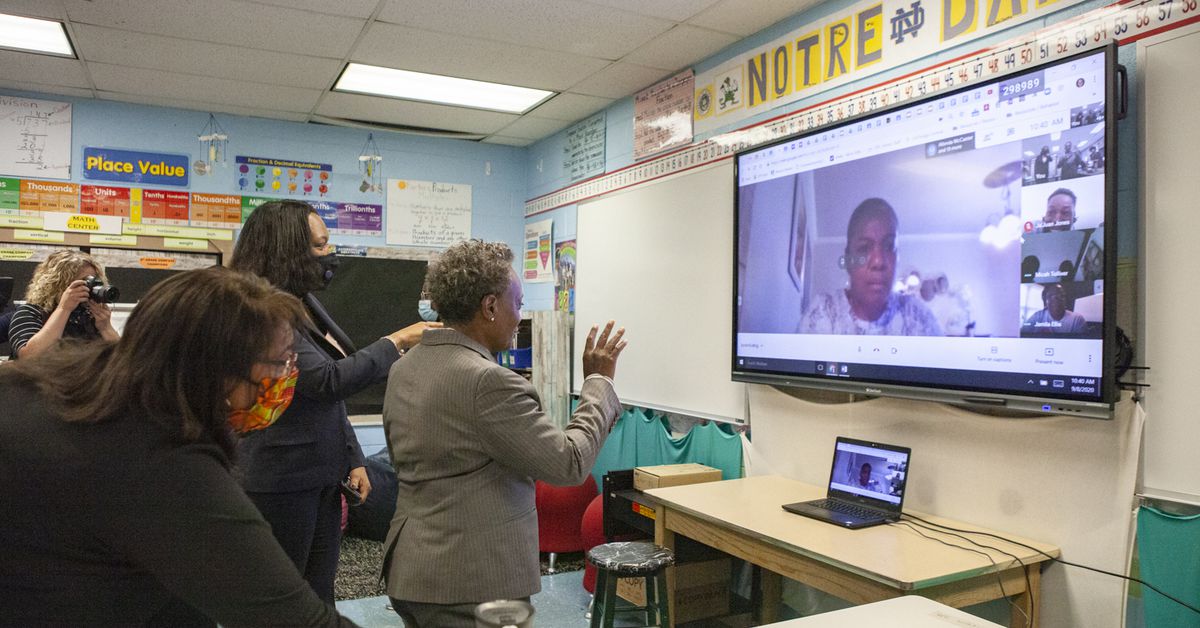 On the first day of remote learning in Chicago schools, 84.2% of students attended online classes, a 10 percentage point drop from the usual first-day figures that have hovered around 94% for the past several years.

But attendance rates tended to vary widely on the campus level, with some schools reaching attendance rates upwards of 95%, while others reported closer to 60% of students participating on the first day.

Schools chief Janice Jackson said she was “proud” of the broader efforts to connect with students, a positive sign for a district that has struggled to equip all students with devices and internet access ahead of the school year.

“The overwhelming majority of our students showed up ready and eager to learn on the first day of school, and I am so proud of our staff and school communities who have been working tirelessly over the summer to ensure families had what they need to log in on day one,” said Jackson in a statement.

The data also shows a steady increase in attendance over the first three days of school, with student participation clocking in at 90.2% by the third day of school.

Still, that rate is lower than last year’s in-person attendance on the first day, a stark reminder of the challenges faced by Chicago families amidst the COVID-19 pandemic.

How the pandemic will impact Chicago’s enrollment more broadly remains a critical question. The numbers don’t capture how many students and families left the school district in advance of the fall, either seeking out seats in districts that reopened buildings or who unenrolled to homeschool children. The district, which has reported steady declines in overall enrollment over the past decade, typically releases enrollment data after the 20th day of school.

In advance of fall, district officials said they stepped up efforts to reach families ahead of the school year. That has included enlisting hundreds of district staff, along with bus aides and Safe Passage workers, to call families and distribute fliers in neighborhoods.

In the spring, many families struggled to connect to the internet. This year, district officials said they are stepping up efforts to reach families about a new $50 million initiative, “Chicago Connected,” which aims to connect low-income students to the internet.

But they have run into a “trust gap”: skepticism in some communities that they would get this service for free, no strings attached. The program so far has signed up a quarter of the 100,000 students that officials estimate can benefit from it.

How to Build a Better, More Equitable Job Hunting Platform