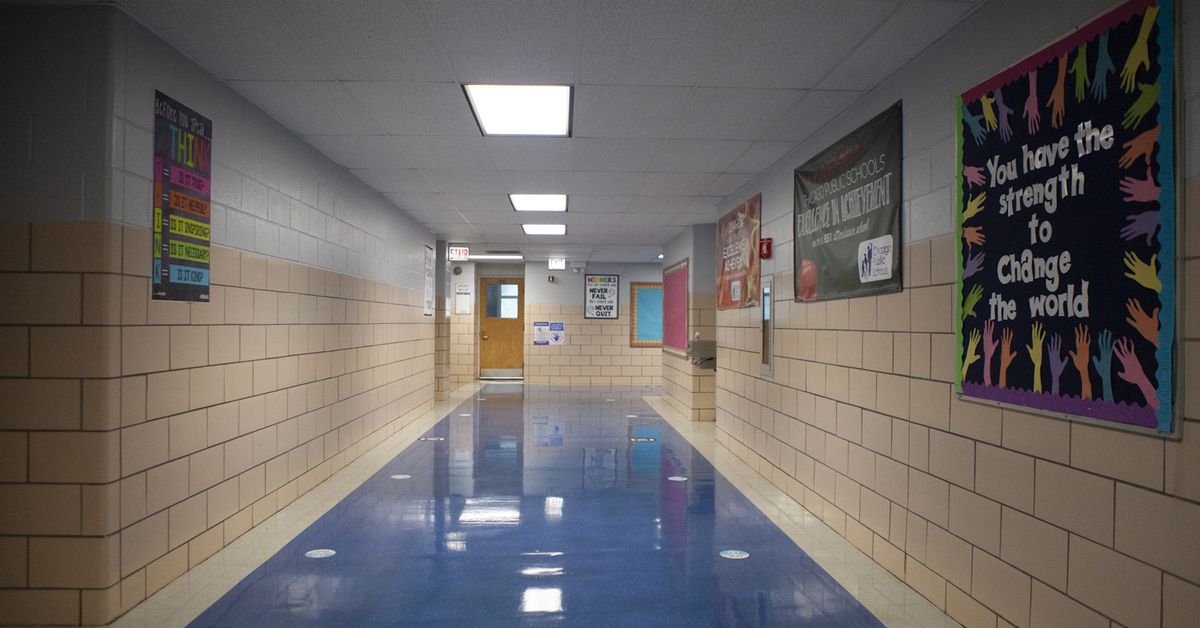 Chicago reported its sharpest enrollment decline in two decades on Friday, with the number of students slipping 4%.

Officials cited steep drops in the number of pre-kindergarten students as helping drive their decision to phase-in reopening in the second quarter, starting with the city’s 3- and 4-year-olds and students with moderate to severe disabilities who are grouped in “clusters” outside of the main classroom.

Chicago’s 20th day enrollment count stands at 340,658. It is not clear how the losses will affect Chicago Public Schools finances, which the state funds based on enrollment. But for now the city will hold onto the title of the third-largest school district in the country. Other similarly sized districts, including Miami-Dade County, the country’s fourth-largest, also reported enrollment drops amid the coronavirus pandemic. As of Oct. 15, Miami-Date reported 334,235 students across district schools and charters.

Chicago has invested millions in expanding full-day, free pre-K, but the pandemic has taken its toll on overall enrollment, as it has in other cities that have reported fewer younger learners. Schools chief Janice Jackson and her second-in-command, LaTanya McDade, said Friday in a letter to families that the losses signal that “online learning is not working for many of our students” and vowed to explore “every possible opportunity” to safely reopen buildings.

“The declining enrollment and attendance data that we have seen among our students in pre-k and cluster programs is unacceptable,” Jackson and McDade said.

Enrollment was not the only factor in the decision to phase-in reopening, Jackson said later Friday at a press conference. While praising teachers’ efforts to shift learning online, she reiterated that virtual learning could not replicate in-person classroom time and that some students risked falling further behind. She also expressed concern about the safety of vulnerable children. Teachers are mandatory reporters of child abuse, and with schools closed, reports are considerably down.

“There are fewer watchful eyes on our students,” she said.

Chicago’s loss of nearly 14,500 students from the previous year was driven largely by fewer younger students, but not entirely. The district, which reported annual enrollment declines before the pandemic, saw enrollment of its youngest learners dip markedly, by 34% across 3- and 4-year-olds. The decline was 44% among Black pre-kindergarten students and district leaders did not immediately know why. Chicago has reported higher COVID-19 rates and hospitalizations in some of the city’s Black neighborhoods. While rates have been similarly high in Latino neighborhoods, the percentage of Latino preschoolers declined 29%, compared with 22% for white students and 9% among Asian students.

“The stunning decline among Black children enrolled in pre-K casts a somber light on how the pandemic and remote learning negatively impact our youngest learners,” said McDade on Friday.

Across district-run elementary schools, Chicago reported 8,086 fewer students, a 4% drop. High school enrollment nudged up slightly, from 73,506 last school year to 73,954 this fall. Enrollment in alternative school programs for students most at-risk of dropping out also inched up slightly, by about 100 students, to 2,283.

In total, the district’s 115 charter schools also reported a slight decline in enrollment, down 1% to 52,819 students from 53,415 last school year. The last decade saw charter schools grow in the district, but since 2015 the number of district students educated by charters has decreased.

Educators said the required 60 minutes of live instruction was difficult for young children, even as they experimented with different scheduling in the face of little concrete research about how to best teach preschoolers virtually.

Liz Carrick, a preschool teacher at a public school near Little Village, told Chalkbeat earlier this fall she expected twice the number of students in her classroom. She ended up with seven on her roster. It made her think about the struggles that were keeping children from signing up for preschool and whether a surge of families would show up when schools reopen. “I don’t know what these kids have experienced. I don’t know what their story is. Where are they?”

Chicago has been on a path toward free, universal pre-K for every 4-year-old in the city, an initiative launched by former Mayor Rahm Emanuel and continued by Mayor Lori Lightfoot. But the preschool rollout has not always gone smoothly, with supply mismatching demand in some neighborhoods, a confusing application process for parents that is managed by an outside vendor, and no automatic option for enrollment in a neighborhood school as there is for K-12.

Parents have also reported conflicting and shifting rules about which students qualify for half-day and full-day programs, what age children can enroll, and their odds of getting into programs.

In Illinois, neither preschool nor kindergarten is compulsory.

The universal preschool expansion had an original goal of 2021, but that has been pushed back a year, to 2022, amid the pandemic and as leaders wrestled with the supply and demand question. Chicago Public Schools said it planned to add 44 more classrooms across 27 schools this fall at a cost of $18 million.

Chicago’s teachers union, which has been critical of the district’s plan to phase in any in-person learning, only addressed enrollment toward the end of a Friday press conference. But two educators who spoke offered some insight into the preschool enrollment declines. Kirstin Roberts, a preschool teacher at Belmont Cragin, said the centralized online registration system — which has been managed by an outside vendor and includes a directory of Chicago Public Schools as well as community based organizations — was “overcomplicated” and it took preschool registration out of the hands of schools. “If you have a preschool student, you have to spend hours navigating a complicated website to register.”

Roberts also said some schools prioritized putting devices in the hands of kindergarten through eighth graders and “did not give devices to preschool families,” but it’s not clear if that practice was widespread.

Home childcare worker Jamila Wilson said that, in her view, parents were fearful of sending young children to schools during the pandemic and may have been more comfortable with smaller, home-based centers in neighborhoods.

Chicago has cited declining birth rates and a precipitous fall in the number of new immigrants as previous reasons for its annual enrollment declines. This year’s drop of 4% outpaces the 1.7% decline the district reported last school year.