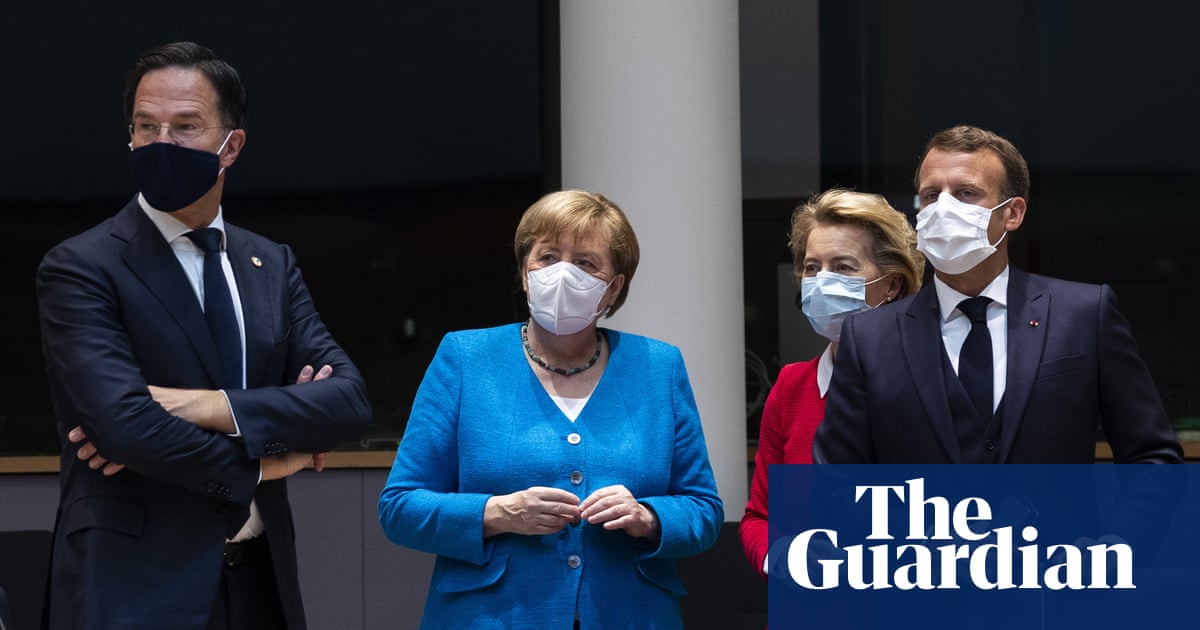 Bad-tempered, late-running EU summits have hardly been unusual over the last decade of eurozone crisis and endless rows over migration. But the latest gathering of EU leaders, now in its fourth day with no end in sight, may be one of the most acrimonious yet.

With a €1.8tn (£1.6tn) financial plan on the table, the stakes are huge. Nobody expected talks to be easy, but expectations of a historic step towards EU fiscal union had risen sinceAngela Merkel abandoned Germany’s long-standing opposition to shared debt – reversing the position she took during the eurozone crisis.

Dinner on Friday evening was “a bit surly” according to the Dutch prime minister, Mark Rutte, after other leaders rounded on him over his insistence on being able to veto others’ access to a €750bn coronavirus recovery fund, if their economic reforms were deemed inadequate. Bulgaria’s prime minister, Boyko Borissov, accused Rutte of wanting to be “the police of Europe”, while Poland’s leader, Mateusz Morawiecki, called Rutte and his “frugal” north European allies “misers”. Italy’s prime minister, Giuseppe Conte, accused the frugals of blackmail.

The second big fight centred on the size of recovery fund grants: a proposed €500bn in grants for the hardest hit countries has been shaved down to €390bn. But it remains unclear if that is acceptable for the frugal club of the Netherlands, Austria, Denmark, Sweden, and unofficial member, Finland.

Leaders battled through Sunday night over the size of recovery grants, finally quitting the Europa HQ shortly after 5.45am. As tempers flared during the small hours, Emmanuel Macron banged his fist on the table, saying he was ready to walk out if “sterile blockages” continued. The French president criticised Rutte for behaving like David Cameron, the former UK prime minister whose EU strategy “ended badly” in Macron’s words.

The British are the ghosts at the negotiating table – another big stumbling block is the size of the rebates on offer to the frugal four, discounts on their EU budget contributions that came after Margaret Thatcher got “our money back” in 1984.

The previous night, Merkel and Macron walked out of midnight talks with the frugals – a display of unity by the Franco-German pair, who first proposed a massive recovery fund underpinned by taboo-breaking EU borrowing on financial markets to pull the EU out of the worst recession in its history.

“They ran off in a bad mood,” Rutte complained. “We are ready to compromise without giving up ambition,” said Macron.

Yet by Monday, Macron said there was “a spirit of compromise”, while Rutte said “progress had been made”.

The third battleground also put the Dutch in the firing line, as Hungary’s prime minister, Viktor Orbán, compared Rutte to the communist police. The Netherlands, along with many EU governments, wants to tie European funds to upholding democratic values – a plan staunchly opposed by Hungary and Poland, both subject to EU investigations on the rule of law.

The communist police used “unclarified legal terms, exactly the same which is written in the proposal of the Dutchman,” said Orbán recalling his own encounters with state police as a young activist.

Orbán’s chief spokesman tweeted that “only Hungarians should get to decide how to spend the money that belongs to [Hungary]” – a stance that is likely to raise hackles, as the country receives six times more from the EU than it pays in.

Some EU diplomats fear that western Europe’s united stance on the rule of law is beginning to fragment. “It’s a bargaining chip,” said one EU diplomat. The frugals give the impression “we might settle for less rule of law, if you agree to the overall recovery plan”, the diplomat said.

As the fourth day wore on, agreement on the €1.8tn deal (the EU’s next seven-year budget and recovery plan) was still hanging in the balance. Some EU sources are already pencilling in a rematch summit in late July or late August – the latter seen as providing more breathing space for countries to rethink their red lines. The head of the European Central Bank, Christine Lagarde, warned against a quick deal that falls short. “The leaders’ agreement should be ambitious in terms of size and composition of the package … even if it takes a bit more time,” she told Reuters.

The longer EU leaders stay in Brussels, the higher the political price of leaving with no deal. Failure to agree will weigh heavily on the EU. The hardest-hit countries already have access to a €540bn financial cushion, but France, Germany, Italy and Spain see this as inadequate to the scale of the looming recession.

Leaving Brussels empty-handed would also be a damaging political blow, tarnishing the EU’s prestige and triggering questions about its ability to act in a crisis. It would also undermine the newish leaders of the EU institutions, the European commission president, Ursula von der Leyen, the architect of the recovery plan, as well the European council president, Charles Michel, the main deal-broker.

Even with a deal, this bitter summit has exposed poisonous mistrust between some leaders, as well as the EU’s struggle to deal with nationalists in central Europe, who are feared to be trampling on Europe’s basic values. A few bad-tempered days in Brussels may leave political scars.