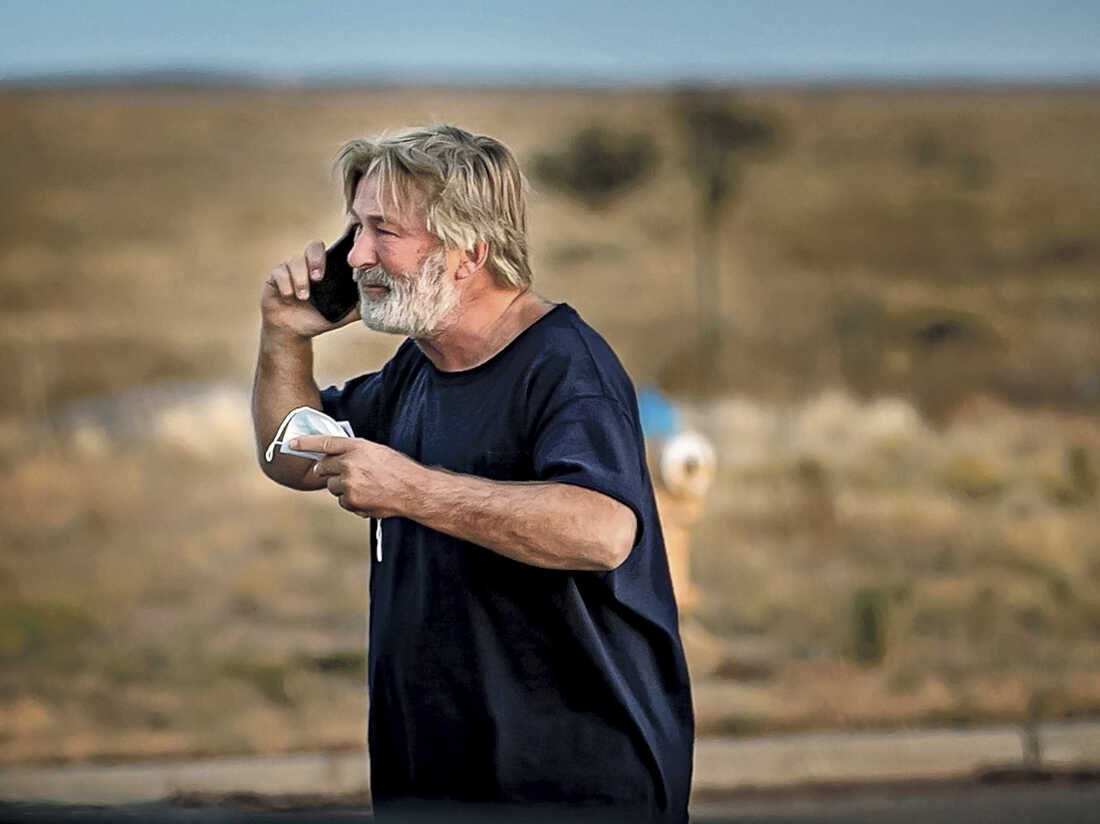 Alec Baldwin speaks on the phone in the parking lot outside the Santa Fe County Sheriff’s Office in Santa Fe, N.M., after he was questioned about a shooting on the set of the film “Rust” on the outskirts of Santa Fe on Thursday. Jim Weber/Santa Fe New Mexican via AP hide caption 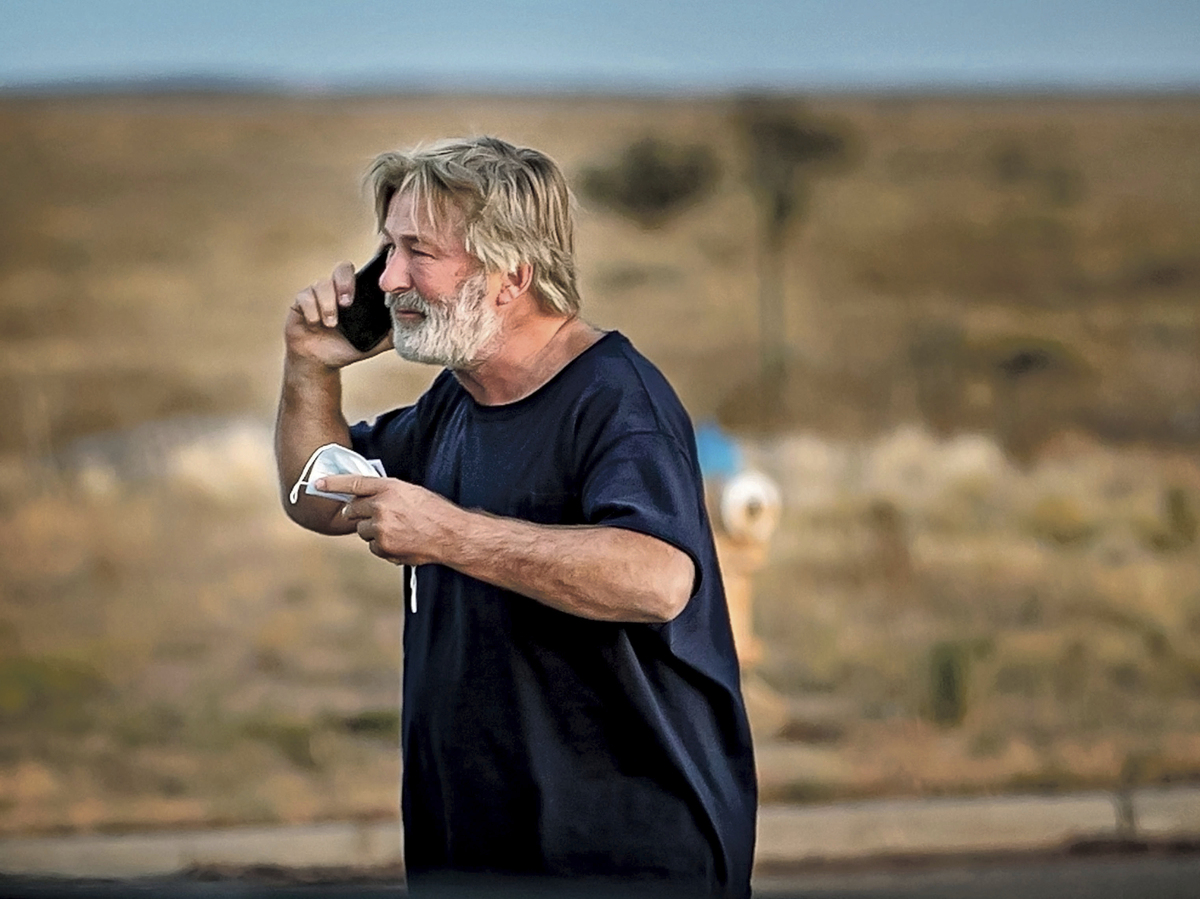 Alec Baldwin speaks on the phone in the parking lot outside the Santa Fe County Sheriff’s Office in Santa Fe, N.M., after he was questioned about a shooting on the set of the film “Rust” on the outskirts of Santa Fe on Thursday.

SANTA FE, N.M. — As a film crew and actors in Western garb prepared to rehearse a scene inside a wooden, chapel-like building on a desert movie ranch outside Santa Fe, assistant director Dave Halls stepped outside and grabbed a prop gun off a cart.

He walked back in and handed it to the film’s star, Alec Baldwin, assuring him it was safe to use because it didn’t have live ammo.

It wasn’t, according to court records made public Friday. Instead, when Baldwin pulled the trigger Thursday, he killed cinematographer Halyna Hutchins and wounded director Joel Souza, who was standing behind her.

Authorities were alerted to the shooting by a 911 call that hints at panic on the movie set, as detailed in a recording obtained by the Albuquerque Journal.

“We had two people accidentally shot on a move set by a prop gun, we need help immediately,” a script supervisor told an emergency dispatcher. “We were rehearsing and it went off and I ran out, we all ran out.”

The dispatcher asks if the gun was loaded with a real bullet.

“I cannot tell you. We have two injuries,” the script director said

The tragedy came nearly three decades after Brandon Lee, the son of martial arts legend Bruce Lee, died in a similar case, and it prompted horrified questions about how it could have happened again. The executive producer of ABC’s police drama “The Rookie” announced Friday the show would no longer use “live” weapons because the “safety of our cast and crew is too important.”

Details of the shooting at the ranch on Bonanza Creek Road were included in a search warrant application filed by the Santa Fe County Sheriff’s Office. Investigators were seeking to examine Baldwin’s blood-stained costume for the film “Rust,” as well as the weapon that was fired, other prop guns and ammunition, and any footage that might exist.

The gun was one of three that the film’s armorer, Hannah Gutierrez, had set on a cart outside the building where a scene was being acted, according to the records. Halls grabbed the gun from the cart and brought it inside to Baldwin, unaware that it was loaded with live rounds, a detective wrote in the search warrant application.

It was unclear how many rounds were fired. Gutierrez removed a shell casing from the gun after the shooting, and she turned the weapon over to police when they arrived, the court records say.

The film’s script supervisor, Mamie Mitchell, said she was standing next to Hutchins when she was shot.

“I ran out and called 911 and said ‘Bring everybody, send everybody,’ ” Mitchell told The Associated Press. “This woman is gone at the beginning of her career. She was an extraordinary, rare, very rare woman.”

Mitchell said she and other crew members were attending a private memorial service Friday night in Santa Fe.

Baldwin described the killing as a “tragic accident.”

“There are no words to convey my shock and sadness regarding the tragic accident that took the life of Halyna Hutchins, a wife, mother and deeply admired colleague of ours. I’m fully cooperating with the police investigation,” Baldwin wrote on Twitter. “My heart is broken for her husband, their son, and all who knew and loved Halyna.”

No immediate charges were filed, and sheriff’s spokesman Juan Rios said Baldwin was permitted to travel.

Images of the 63-year-old actor — known for his roles in “30 Rock” and “The Hunt for Red October” and his impression of former President Donald Trump on “Saturday Night Live” — showed him distraught outside the sheriff’s office on Thursday.

Guns used in making movies are sometimes real weapons that can fire either bullets or blanks, which are gunpowder charges that produce a flash and a bang but no deadly projectile. Even blanks can eject hot gases and paper or plastic wadding from the barrel that can be lethal at close range. That proved to be the case in the death of an actor in 1984.

In another on-set accident in 1993, Lee was killed after a bullet was left in a prop gun, and similar shootings have occurred involving stage weapons that were loaded with live rounds during historical re-enactments.

Gun-safety protocol on sets in the United States has improved since then, said Steven Hall, a veteran director of photography in Britain. But he said one of the riskiest positions to be in is behind the camera because that person is in the line of fire in scenes where an actor appears to point a gun at the audience.

Sheriff’s deputies responded about 2 p.m. to the movie set at the Bonanza Creek Ranch after 911 calls described a person being shot there, Rios said. The ranch has been used in dozens of films, including the recent Tom Hanks Western “News of the World.”

Hutchins, 42, worked as director of photography on the 2020 action film “Archenemy” starring Joe Manganiello. She was a 2015 graduate of the American Film Institute and was named a “rising star” by American Cinematographer in 2019.

“I’m so sad about losing Halyna. And so infuriated that this could happen on a set,” said “Archenemy” director Adam Egypt Mortimer on Twitter. “She was a brilliant talent who was absolutely committed to art and to film.”

Manganiello called Hutchins “an incredible talent” and “a great person” on his Instagram account. He said he was lucky to have worked with her.

After the shooting, production was halted on “Rust.” The movie is about a 13-year-old boy who is left to fend for himself and his younger brother following the death of their parents in 1880s Kansas, according to the Internet Movie Database website. The teen goes on the run with his long-estranged grandfather (played by Baldwin) after the boy is sentenced to hang for the accidental killing of a local rancher.