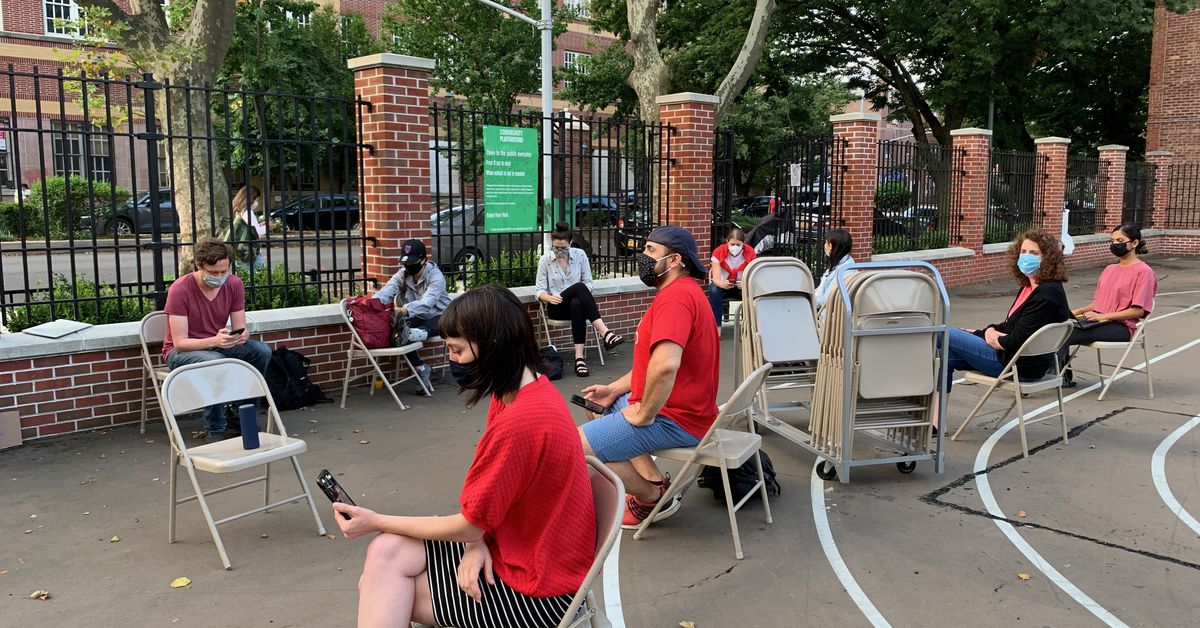 Following days of rumors about coronavirus cases popping up at city schools, education officials announced on Friday that 19 school staffers have tested positive.

One school for students with special needs, the Academy for Career and Living Skills in the Bronx, had two confirmed cases in separate classrooms, triggering a school building closure for at least 24 hours while city health officials investigated, education department spokeswoman Miranda Barbot said.

The rest of the 17 confirmed cases were across 17 separate schools, which remained open. Teachers are reporting to buildings to prepare for the new school year, and schools will not welcome back students until Sept. 21. The city’s teachers union indicated in a Friday press release that there are actually 22 coronavirus cases, though city officials did not immediately confirm that number.

Under city health protocols, only individual classrooms close if one person is confirmed to have the coronavirus or two people have been in close contact with that individual. The city defines close contact as two or more people having been within 6 feet of each other for more than 10 minutes. Officials did not immediately identify those schools.

The 19 positive cases are a small fraction of the 15,000 tests education staff took last week, but it’s unclear if all these cases are tied to last week’s tests. Public health experts have said that positive cases are to be expected and not necessarily a cause for alarm or evidence that infections are spreading inside school buildings.

The department encouraged staffers to get tested before returning to buildings, including the city’s nearly 80,000 teachers, but did not require it. The city’s teachers union had raised concerns about those tests coming back promptly, but department officials said 97% of results were delivered within two days.

The disclosure on Friday afternoon came after days of mixed messages about how the city would handle releasing information about positive cases in schools and its protocols for handling them. It also came as images circulated on social media of teachers refusing to enter a Queens school where a staff member had tested positive.

On Wednesday, the day after teachers were required to report back to their buildings for the first time this school year, the education department confirmed that two staff members had tested positive at two separate Brooklyn campuses shortly after a city councilman told Gothamist about those cases.

On Thursday, though, Mayor Bill de Blasio said the city would report positive cases each day “once school begins” — apparently referring to the Sept. 21 start date for in-person classes. Then on Friday, the education department disclosed cases at 18 schools.

One teacher who worked in close proximity to a M.S. 88 colleague who tested positive for the coronavirus told Chalkbeat on Thursday that she had not heard from NYC’s Test and Trace Corps — trained investigators who help track down those who might have been exposed to the virus. Other teachers echoed concerns about contract-tracing.

De Blasio has emphasized that the city’s public health protocols for handling infections in schools are rigorous, but public health experts said it is essential that the city be transparent and repeatedly explain those procedures to the public.

“Almost certainly the rumors on Twitter are going to make the problem look worse than what it actually is,” Benjamin Linas, an epidemiologist at Boston University, previously told Chalkbeat. “The desire to avoid the panic just generates panic.”

Barbot said the city plans to report regularly on new cases starting next week, when it launches a “rapid response team” of health officials and contact tracers to respond quickly to reports of infections.

This is the team principals would notify if a staff member or student reports testing positive. (Test and Trace can also notify schools of positive cases.) It was not immediately clear how that system will work or why it wasn’t up and running before school buildings reopened. The city plans to conduct monthly random tests of between 10-20% of all people in school buildings starting in October.

In a video message to his members, teachers union president Michael Mulgrew said the education department seemed unprepared for even a low number of positive cases and threatened to fight against reopening buildings. “It’s like they didn’t know this was going to happen,” he said.

Department officials did not reveal the names of all the schools with the positive cases, but did confirm a case reported Thursday at I.S. 230 in Jackson Heights, Queens, where distrust over city protocols prompted teachers to work from the school’s playground on Friday.

I.S. 230 staff did not receive an official email notifying them of that positive case until early morning Friday, but word spread much sooner, after the teacher had reported her positive test to the principal Thursday afternoon, said Chris DeRosa, a special education teacher at I.S. 230 and the school’s union delegate. Barbot said the department notified I.S. 230 staff as soon as they learned of the case, while also attempting to confirm it with city health officials.

“We’re like, ‘Oh, any minute now we should be getting that email’ because the principal knows who’s in the building, we all checked in,” DeRosa said, explaining how the principal had notified the district superintendent immediately. “Nothing happened.”

The city’s reopening plan states that contact tracers should begin investigating within three hours of someone self-reporting a case, but the letter sent to I.S. 230 staff said contact tracing would start after the city confirmed the teacher’s positive test. The department did not immediately comment on the apparent discrepancy between the city’s plan and the letter.

Alison Gendar, a spokesperson for the union, said a health department nurse didn’t ask the positive teacher for her close contacts until 10 a.m. on Friday morning — about 20 hours after the teacher first reported the case to her principal. Education department officials did not immediately comment on the timeline.

On Friday afternoon, Barbot said the investigation at I.S. 230 was complete, and “multiple people” were quarantining.

“While we continue to navigate the realities of a pandemic, there will be positive cases,” she said in a statement. “We are putting people’s health above everything else by quickly identifying and isolating positive cases, which is a leading effort to prevent transmission.”

Looking For Marriage In All The Wrong Places