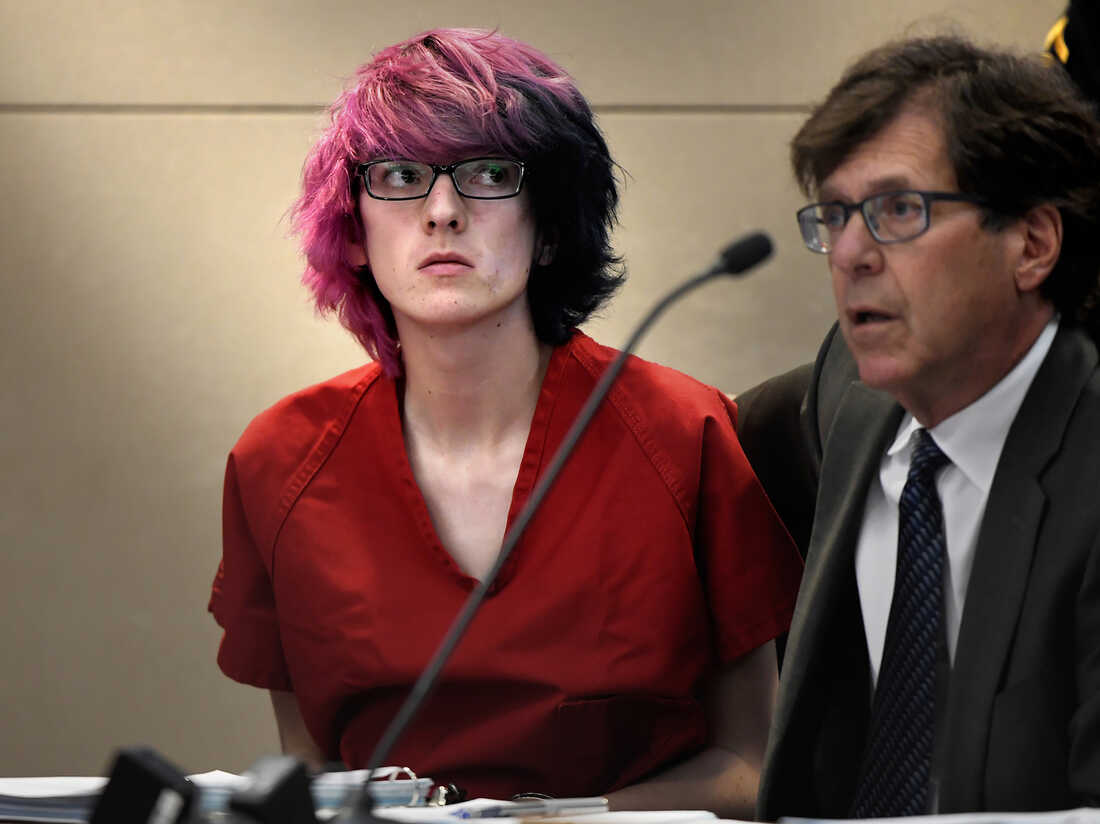 Devon Erickson appears in court at the Douglas County Courthouse in Castle Rock, Colo., on May 15, 2019. The former high school student was convicted of first degree murder and other charges for a 2019 shooting attack inside a suburban Denver high school that killed one student and injured eight others. Joe Amon/The Denver Post via AP, Pool, File hide caption 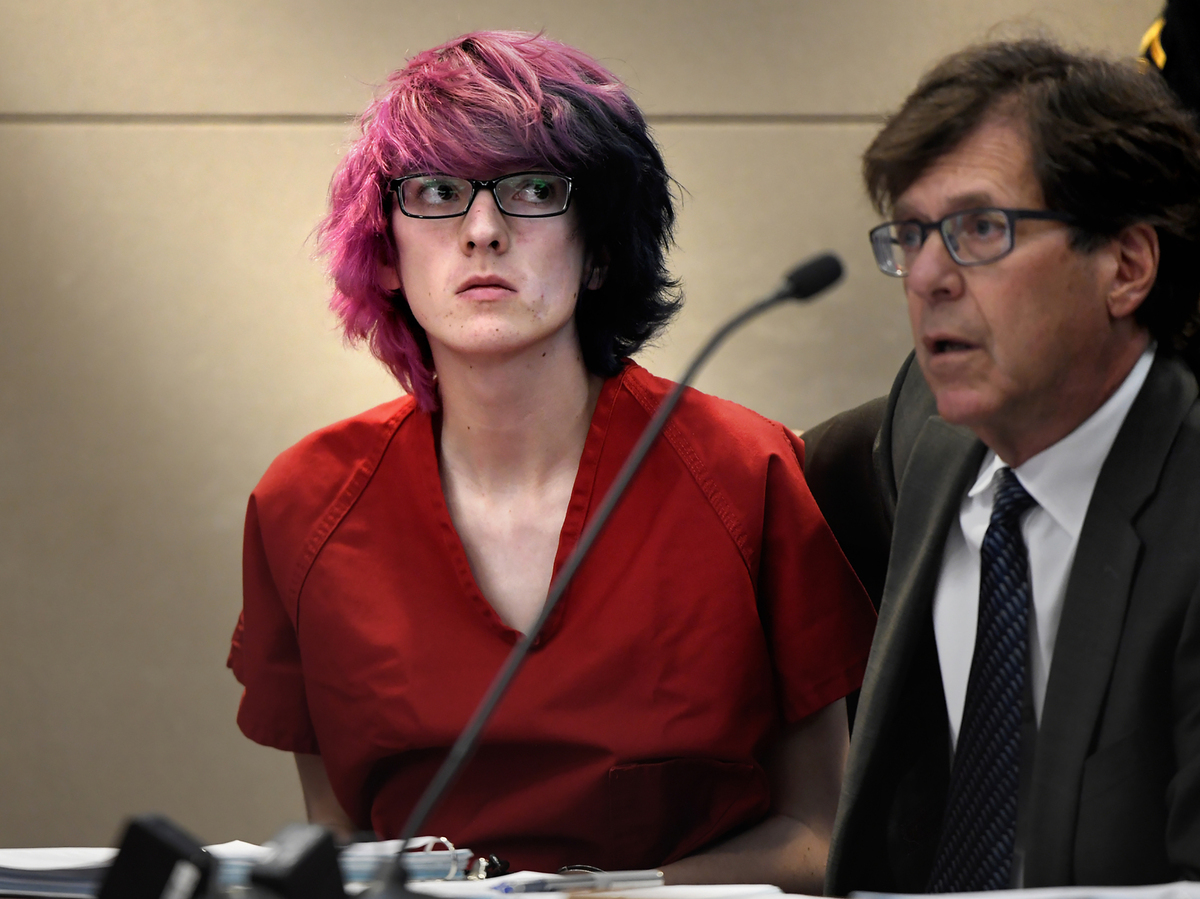 Devon Erickson appears in court at the Douglas County Courthouse in Castle Rock, Colo., on May 15, 2019. The former high school student was convicted of first degree murder and other charges for a 2019 shooting attack inside a suburban Denver high school that killed one student and injured eight others.

DENVER — A judge on Friday sentenced a former student to life in prison without parole for a 2019 shooting inside a suburban Denver high school that killed one teenager and injured eight others, telling the defendant he had shown no remorse and had failed to help a devastated community understand his actions.

Devon Erickson, now 20, was convicted in June of 46 charges, including first-degree murder in the death of Kendrick Castillo, an 18-year-old senior hailed as a hero for trying to stop the attack on a classroom at STEM School Highlands Ranch, south of Denver.

Prosecutors said Erickson partnered with fellow student Alec McKinney in the May 7, 2019, shooting. McKinney told investigators that he planned the attack for weeks and intended to target classmates who repeatedly mocked him because he was transgender, according to court documents. Since Erickson was 18 at the time of the attack, he faced a mandatory life sentence.

After a lengthy and emotional hearing in which survivors shared their pain, trauma and disruptions to their lives, Judge Theresa Michelle Slade added hundreds of years of prison time to Erickson’s life sentence for multiple charges of attempted murder and other counts.

Wearing handcuffs, a red-and-white-striped prison suit and a blue mask amid the coronavirus pandemic, Erickson displayed virtually no emotion except for blowing his nose into his mask after sentencing. But just after his parents, sister and grandfather told him they loved him in their testimony, his voice broke when the judge asked if he wanted to speak. He declined.

“I don’t think there is anything I can say to you, Mr. Erickson, that would make any difference,” Slade said, recounting how the shooting had devastated not only those at the school and their families but untold numbers of people beyond the suburban community where the school is located.

The judge said Erickson never tried to explain his actions, leaving a gaping hole for a community seeking at least some sense of closure.

“I don’t believe, Mr. Erickson, at least for now, that it makes a difference to you,” Slade said. “So what you do the rest of your life in prison, that’s not on me. It’s on you.”

McKinney, who was 16 at the time of the shooting, was sentenced to life in prison last year but could become eligible for parole after about 20 years under a program for juvenile offenders.

Erickson and McKinney targeted a classroom of students sitting in the dark as they watched a movie at the end of their senior year. The two entered through separate doors to maximize the number of students they could kill, prosecutors said.

Erickson and McKinney concocted a “victim-hero” plan in which McKinney would either kill himself or be killed by Erickson, prosecutors said.

The shootings stopped when Castillo and two other students, Joshua Jones and Brendan Bialy, charged Erickson, whose gun jammed after he fired four times. A school security guard apprehended McKinney.

Defense attorneys argued that Erickson was pressured into participating by McKinney, who testified against Erickson after pleading guilty last year. The defense also suggested that Castillo was accidentally shot as he pushed Erickson against a wall.

Statements Friday by teachers, former students, their parents and Castillo’s mother and father wove a harrowing picture of lives shattered by enduring trauma, panic attacks, recurring nightmares of gunshots, blood, screams and heavily armed SWAT teams rescuing those in hiding inside the school.

One teacher said she became so frightened of working with older students and worrying about what they might do that she now teaches younger children.

Jones and Bialy, who were shot while helping Castillo subdue Erickson, didn’t hide their disgust.

“He killed Kendrick, and he didn’t care,” Jones said, nearly heaving at the witness stand. “I would implore you to put him in jail for as long as you can.”

“The defendant is a loser,” Bialy said. “He walked into a classroom, armed, with vulnerable students, and he lost.”

Castillo’s parents, John and Maria Castillo, proudly, if painfully, described their son as an only child who was happy — a young man of faith always ready to help others.

“We don’t want to forget Kendrick, but it’s an emotional journey that most people will never understand, and I hope they don’t,” John Castillo said.

Defense attorney David Kaplan insisted that Erickson was “exceptionally remorseful.” Witnesses and family described him as an unselfish and cheerful person who helped others and loved school, a jazz singer who gave lessons to younger students — and someone who fell under the sway of McKinney.

Erickson’s father, Jim Erickson, read aloud the names of those injured and apologized to them, teachers, students, law enforcement and the broader community.

At his sentencing last year, McKinney said he did not want leniency. But he also suggested the shooting was Erickson’s idea.